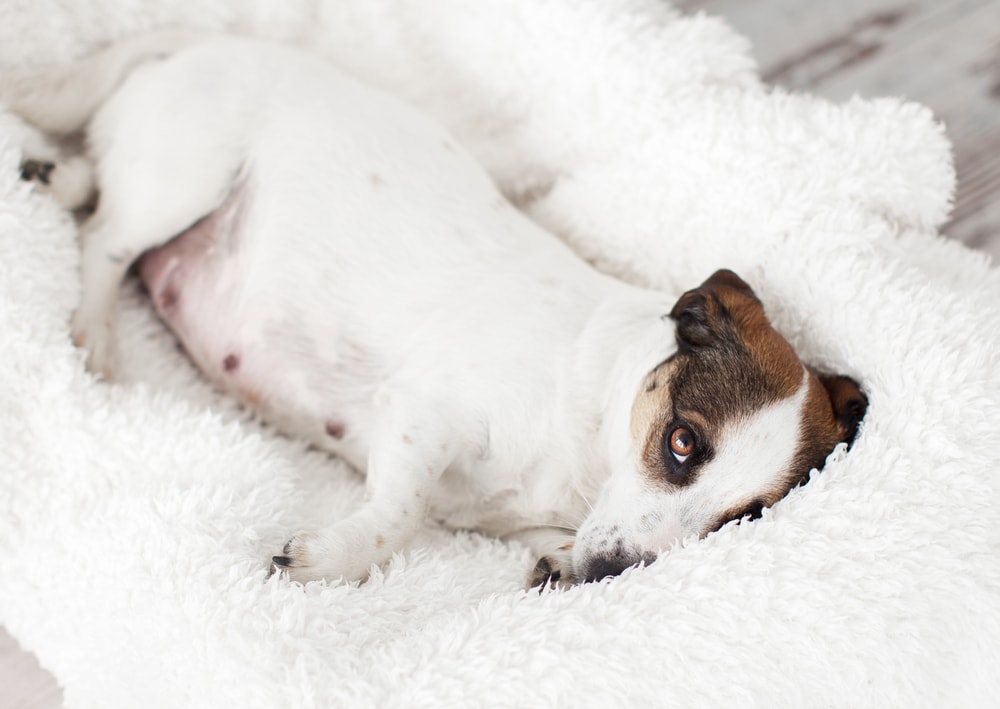 It’s a very exciting time when your dog is pregnant and you’re expecting puppies. In most cases, things will go smoothly and you’ll end up with several new puppies in just a few months’ time. Occasionally, things don’t go as planned though, and complications arise in your dog’s pregnancy.

Abnormalities can occur during the early stages of pregnancy, while your dog is whelping, or after pregnancy is finished and all the puppies have been delivered. No matter when you discover an abnormality, it can be disheartening and scary. While your dog is pregnant, it’s a good idea to keep an eye out for any possible abnormalities with its pregnancy so that if there is a problem, you have a good chance of catching it early and doing something about it.

During and Before Whelping

Not every complication with pregnancy happens while your dog is still pregnant. Many won’t become an issue until after your dog has finished whelping. However, the abnormalities we’re about to discuss happen during pregnancy and birth.

Dystocia is essentially a catchall term for difficult births. As such, several different things can cause dystocia. This is the main and most common abnormality that affects pregnancy and birth in dogs.

There are seven main causes of dystocia:

When to Call the Vet

Dystocia can be a very serious problem. If any of the following occur, you need to call the vet and get some professional assistance:

After you determine there’s a problem and you contact your vet, your vet will first need to perform a physical examination. This will allow your vet to determine whether or not the pups can move through the birth canal. The examination might consist of a vaginal exam, X-rays, and more. Once your vet diagnosis the issue, treatment can begin.

A variety of treatments might be used, including but not limited to:

Aside from dystocia, the other most common abnormality that occurs before whelping is false pregnancy. This is a rather common occurrence that usually happens around the end of the heat cycle. The dog will gain weight, their mammary glands might swell, and they could even start producing milk. Behavioral changes may accompany these physical changes as well. You might even witness your dog nesting or see a drop in appetite. False pregnancies aren’t usually treated because they tend to fix themselves within a week or two.

When it comes to abnormalities that occur before and during whelping, most of them are classified as dystocia. But there are several abnormalities that only present themselves after the whelping is complete and all the puppies have been delivered, including the following:

Mastitis is a condition that’s more common in cattle, though you will see it in dogs with some regularity. This is an infection of the mammary glands that occurs only in nursing females. This includes both bacterial and fungal infections, though bacterial infections are most common. You can help prevent the possibility of mastitis by keeping your dog’s whelping box clean and dry, along with any spaces dedicated to raising the puppies.

Metritis is when the lining of the uterus becomes inflamed because of a bacterial infection shortly after giving birth or experiencing an abortion or miscarriage. If left untreated, metritis can cause sterility and even septic shock, resulting in a lethal condition. Some symptoms of metritis include a swollen, soft abdomen, dehydration, dark red gums, fever, bloody or foul-smelling discharge from the vulva. Dogs with metritis might also neglect their puppies or experience reduced milk production or depression. Curing this condition requires hospitalization for fluid therapy and possibly even for shock.

Eclampsia is when a nursing dog’s blood calcium levels drop drastically, creating a life-threatening condition. It’s most common to see eclampsia in the mother when puppies are between one and four weeks of age. It can be caused by loss of calcium during pregnancy or lactation. Alternatively, it might be from a dietary deficiency during pregnancy or a hormonal problem associated with the parathyroid gland. Signs of eclampsia include restlessness, panting, stiff movement, muscle spasms, and convulsing. In rare cases, affected dogs might become aggressive, disoriented, or experience a high fever.

Sometimes, hemorrhages occur during whelping. If you see significant blood flow following whelping, it could be a serious emergency and you should contact the vet right away. Other signs of hemorrhage include dehydration, constant vomiting, green vaginal discharge, weakness, and lack of appetite.

Subinvolution of placental sites or SIPS is when the placental sites fail to repair properly. This causes several weeks of bloody uterine discharge and is most common in dogs under three years old that are whelping their first litter.

While most canine pregnancies go off without any complications, there’s always a possibility of something going wrong. Knowing the signs of abnormalities ahead of time can allow you to spot an issue when it first starts, which might give you a better chance of curing the underlying problem without major health effects for the mother or puppies. Hopefully, your dog will never experience any of these complications, but if they do, at least you’re prepared to spot the first signs and take action.