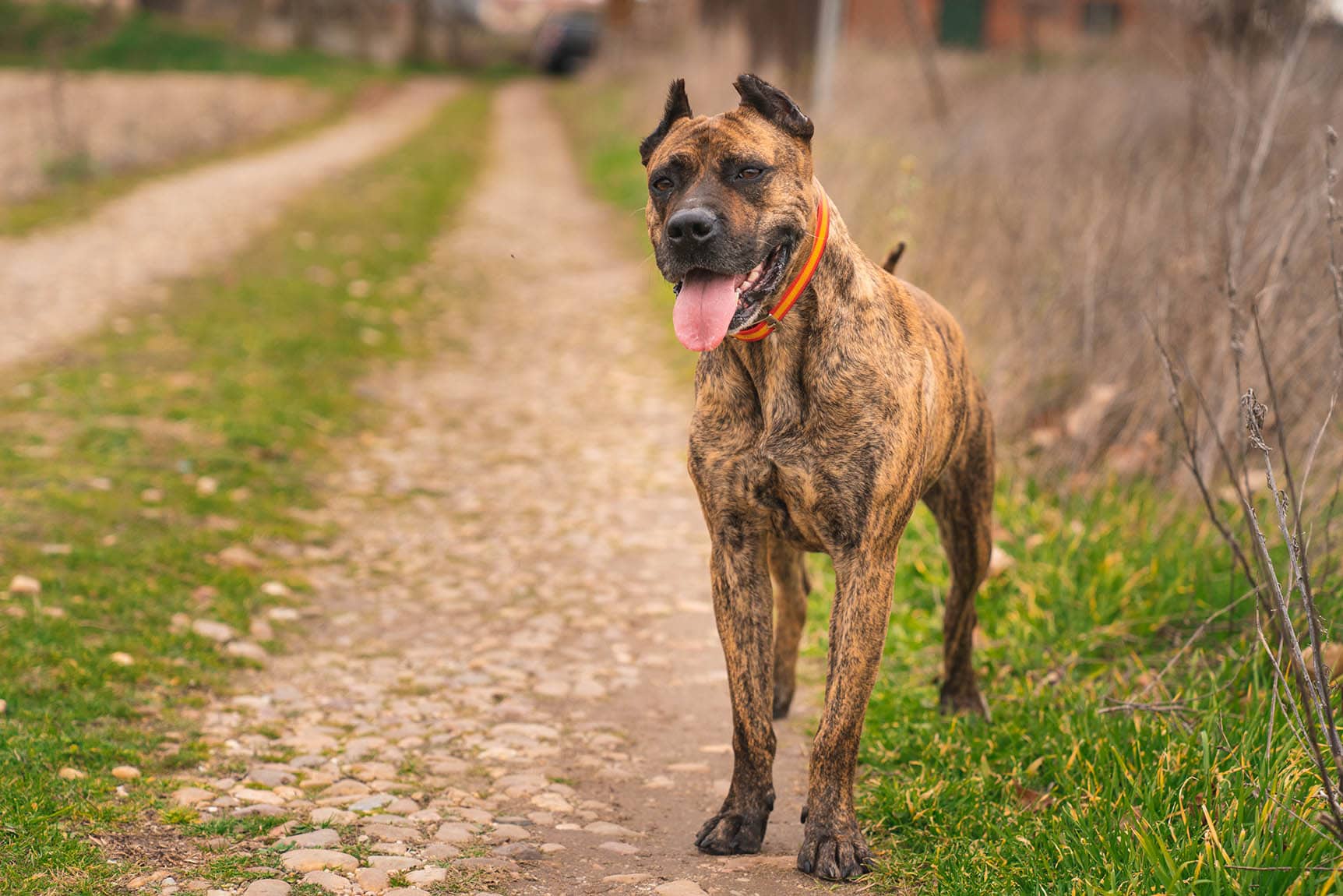 With a large stature and distinctly primitive looks, the Alano Espanol isn’t a breed for everyone. However, for the people that can handle such a breed, the rewards are many. These dogs are incredibly hard workers, and they were bred to work in rugged conditions, so the weather has little effect on them. An Alano Espanol can weigh nearly 100 pounds, with a well-muscled body built for maintaining high-speed runs across long distances.

Alano Espanols are jacks of all trades. They can work, hunt, and even get along great with children. Yours could be a watchdog, a guard dog, a companion, or a ranch dog. With nearly endless endurance, you’ll never see an Alano Espanol get tired, even after running or working all day. They move with a grace that’s surprising for such a large animal, with agile movements that don’t waste any energy.

Few dogs have the dominant stature and personality of an Alano Espanol, but despite their outward dominance, these dogs act very submissively towards their owners. They’re very affectionate, quiet dogs that display the utmost obedience, even showing a willingness to fight to the death if ordered.

Alano Espanol Puppies – Before You Buy…

If you’re looking to add an Alano Espanol to your family, then you’ll need to do a lot of digging. These dogs nearly went extinct less than 100 years ago. As industrialization progressed, large dogs like the Alano Espanol were no longer necessary for holding cattle or hunting big game, and bullfighting was outlawed. The need for dogs like the Alano Espanol began to dwindle, and in the early 1960s, this breed was believed to have died out. Luckily, a few members remained, and in the 1990s, breeders made a recovery effort to help the breed, but they’re still far from being a common sight.

Because of their incredible rarity, getting an Alano Espanol puppy is not only extremely difficult, but it’s also very expensive. These dogs aren’t recognized by many canine federations, so they can’t compete in shows. Neither the AKC nor the FCI recognizes the breed, but their prices are similar to those of dogs with proven pedigrees.

You’d be hard-pressed to find an Alano Espanol at all, let alone for less than $1,000. Most specimens sell for around $2,000, despite the lack of a pedigree. And since most breeding efforts take place way overseas, you should also figure in the cost of a trip out to get your dog, and the price of shipping it back with you, which are both rather costly endeavors.

1. They’re One Of The Only Molosser Breeds That Don’t Drool

Molosser breeds are large in size and imposing in nature. These dogs have large, wide chests, muscular bodies, and above-average strength. Dogs such as bully breeds and mastiffs are all part of this group, including American Bulldogs, Pit Bulls, Boxers, English Bulldogs, Great Danes, Rottweilers, Neapolitan Mastiffs, and many more.

One thing that most Molosser breeds have in common is an overabundance of saliva. These dogs are known for drooling an absurd amount, but that’s not the case with the Alano Espanol. For some reason, though almost every other Molosser breed deals with excessive drooling, Alano Espanols do not slobber or drool, and they don’t even snore either!

Most people feel bad about leaving their dogs outside, preferring to keep them in the home with the rest of the family. Of course, not everyone feels this way, and if you think dogs should sleep outside, then an Alano Espanol might be the dog for you, as these dogs do better sleeping outside in the elements.

Few breeds are as hardy as the Alano Espanol, and they were bred to survive and thrive in rough environmental conditions, including frigid temperatures in winter, incredible heat in summer, high humidity levels, and a lack of moisture altogether. They can adapt to just about any climate, always sleeping outside. Even temperatures below freezing don’t bother an Alano Espanol!

3. They Have Stronger Front Than Rear Legs

Alano Espanols are incredible athletes. They’re outrageously strong with endurance capabilities that are second to none. These animals were often used to chase down large game including boars, and they were expected to hold them there until the hunter arrived. As such, they needed some impressive attributes, and their incredibly muscular bodies helped. While the hindquarters are well-muscled and strong, the front legs are even more muscular and stronger. They’re straight from the front or side as well, and an Alano Espanol has larger paws than most dogs of similar stature.

Temperament & Intelligence of the Alano Espanol

Highly intelligent and utterly obedient, the Alano Espanol is the perfect canine for working, hunting, or just keeping the family safe. They’re surprisingly quiet dogs that rarely ever bark. Rather, they watch silently, waiting for anything to alert them. These dogs are very wary of strangers, and if they decide that defense is necessary, there won’t be any audible warning.

The Alano Espanol is willing to die for its family. They’re courageous and fearless dogs with exceptional tolerance to pain. Though they’re very dominant dogs in general, Alano Espanols show great obedience to their owners. They’re very calm and centered dogs who follow orders with undying devotion. Interestingly, these dogs show almost no aggression, even though they’re capable of cornering and holding highly aggressive animals.

You might expect such a big breed to have problems with little children, but Alano Espanols are known to be excellent with kids and make great family pets. They’re very gentle and patient when it comes to children, which is part of why they make such great watchdogs.

Dogs of this breed are pack animals. They’re quite social and do great with other dogs. They were bred to operate as team animals, so they do get along well with other canines, and they’ll play around hard together. However, if a challenge is issued, an Alano Espanol will never back down.

Things to Know When Owning an Alano Espanol:

Naturally, as a large breed, Alano Espanols will eat quite a bit of food. They don’t have any specific dietary requirements, though. Since they’re not susceptible to any major or minor health concerns, you don’t need to take any special precautions with their food. A high-quality dry kibble will provide adequate nutrition. You can opt for a big-breed-specific formula to ensure that your dog is receiving ample nutrients and the kibble is the correct size.

Because they have such incredible endurance and muscularity, dogs of this breed require high amounts of exercise. You’ll need to provide more than an hour of exercise each day, and 2 hours would be even better. These dogs also need a lot of space to run and exercise on their own, but aside from that, you should take your Alano Espanol on three walks each day, including one that’s very long. They’re great partners for runners, as you’d find it very difficult to ever outrun one of these canines. As long as your feet will keep moving, so will theirs!

Alano Espanols are very intelligent dogs that show exceptional obedience to their owners. However, they’re also quite dominant, which means that you must be even more dominant to earn the respect and obedience of these dogs. For this reason, it’s recommended that only experienced dog owners keep an Alano Espanol. If you don’t have a firm enough hand, the dog won’t respect you as the leader, and you’ll have a very large dog that thinks the house belongs to it. But if you manage a firm hand and plenty of confidence, your Alano Espanol will be one of the best-behaved dogs you’ve ever seen.

This breed sheds an average amount. They have very short coats though, so grooming needs are minimal. Just brush the coat once a week to prevent the loose hair from accumulating. But remember, these dogs are meant to be outside, so the shedding shouldn’t be much of a factor anyway. Overall, upkeep on an Alano Espanol is incredibly easy, as they need less maintenance than most breeds.

Alano Espanol is an ancient breed, and they were created to work in some very rough conditions. Originating from an environmentally inhospitable region, this breed was forced to become very hardy. While there are many tough breeds out there that aren’t susceptible to many health conditions, Alano Espanols take that to a new level.

These dogs rarely ever get sick; they’re about as resistant as canines come. There are no health concerns that you need to watch out for with an Alano Espanol. Even when they do come down with a rare sickness or disease, the amazing immune systems that these dogs possess fight it off and allow specimens of this breed to overcome illnesses that should have been fatal.

Unfortunately, due to the rarity of this breed and the small number of existing specimens, not much is known about temperamental differences between males and females. Physical differences between the sexes are understood, as males tend to be a bit bigger and heavier. Males are usually 23-25 inches and weigh 80-90 pounds on average, while females top out at 24 inches and rarely weigh more than 85.

If you’re looking for a big-breed dog without many of the flaws that generally accompany dogs of such stature, then the Alano Espanol is a great candidate. Though large and muscular, these Molosser dogs don’t drool, slobber, or even snore. They’re incredibly obedient to their owners, though dominant in personality otherwise. Bred to chase down and hold large game or fight bulls, these dogs have imposing physiques with powerful muscles, but they’re incredibly patient and gentle with children. They’re all-around great dogs, but finding one could prove very difficult since they nearly went extinct just a few decades ago.