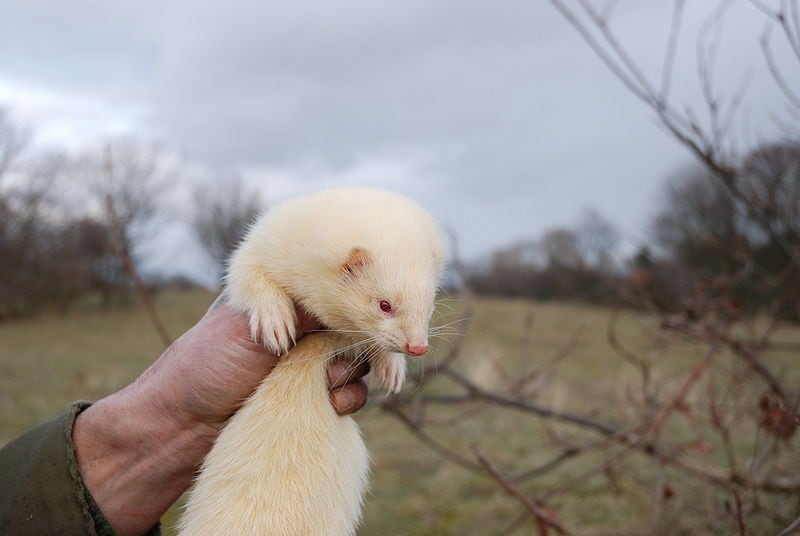 Ferrets come in a variety of different colors, including the albino. These rodents are cute, smart, interactive, and fun-loving. They enjoy running around the house and exploring nooks and crannies. They also like sitting on the shoulders of their human family members. They are generally easier to take care of than other animals, like cats and dogs, although they do require commitment and a great deal of attention.

These animals also need help with grooming in terms of nail trimming, bathing, and ear and teeth cleaning. While albino ferrets feature many of the same characteristics as a common ferret does, a few of their unique characteristics are worth investigating. Following are a few fascinating facts about albino ferrets that we think you should know about.

1. They Have a Genetic Mutation

Albino ferrets do not feature any color other than white due to a gene mutation. The mutation is caused by the deletion of exon 4 in the tyrosinase gene. This mutation is also responsible for animals such as dogs, cats, rabbits, cows, and rats being albino. Nothing is wrong with albino animals. It just means that they cannot produce pigmentation.

2. They Look Different Than White Ferrets

A post shared by The adventures of 5 ferrets (@the_wacky_weasels)

At first glance, it can be easy to confuse a white ferret with an albino one. White ferrets tend to have darker colored eyes, and their coat may feature slightly yellow highlights that can be seen in the sunlight. Albino ferrets have no color anywhere on their bodies, and their eyes are always red. The red eyes are a sure sign of albino coloring because other ferrets do not have red eyes. Instead, they are typically brown or black in color.

Many people think that albino ferrets are more fragile or less active than colorful ferrets, but this could not be further from the truth. Albino ferrets are just as active and curious — if not more so — than colored ferrets. They will spend all their awake time exploring, playing, and checking out new items that they find around the house.

All ferrets can use baths occasionally to keep oils from building up on their skin. But oils are important, so a bath every couple of months is typically sufficient. However, albino ferrets tend to need baths more often to keep their fur pristine and free of ugly dirt spots. Monthly bathing should keep their coats clean and white without stripping their skin of too many healthy oils.

5. They Can Be Sensitive to Bright Light

Because of the lack of pigmentation in their eyes, albino ferrets can be sensitive to bright sun and artificial light. They may squint or close their eyes while the light is shining on their faces, but the light will not injure their eyes or harm them in any way. However, if owners notice that their albino ferrets seem sensitive to light, they should ensure that their habitats are moved away from windows in the home.

6. They Are Just as Healthy as Other Ferrets

Albino ferrets are just as healthy as any other ferrets even though they have a genetic mutation. The mutation only affects the coloring and eyes of the albino ferret. Their hearts, lungs, cardiovascular system, and all other aspects of their makeup are typically just as strong as those of a colored ferret. However, it is worth noting that all ferrets seem to become more susceptible to health problems as they get older.

7. They Would Not Do Well in the Wild

Albino ferrets would have a handicap in the wild compared to other ferrets, simply because they are so easy for predators to see and they cannot easily hide away so they are safe from harm while they sleep. While some albino ferrets may be born in the wild, those born in captivity should not be released into the wild.

Now that you know fun and interesting facts about albino ferrets, you are probably ready to go out and adopt one of your own. They make awesome pets, they are fun to play with, and their unique albino look is sure to be a showstopper among visitors to your home. Just make sure you are ready for the commitment of taking care of this curious and loving animal. What features of the albino ferret do you like the most? Let us know down in our comments section!