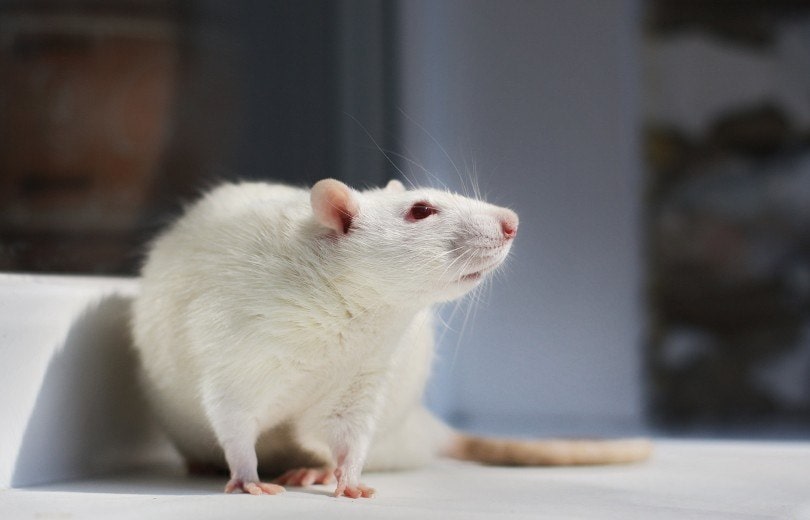 While many people instinctively recoil at the sight of a rat, albino rats often merit a double-take at the very least. These animals are hard to miss, what with their bright coats and shining eyes, and they’re often kept as pets as a result.

While you may be familiar with these creatures, how much do you really know about them? If you said, “not enough,” then you’re in luck, because we’re about to hit you with 18 amazing facts about these incredible animals.

1. They’ve Been Around for Hundreds of Years

The first mention of an all-white rat dates back to 1553, when Swiss naturalist Conrad Gessner made mention of encountering one in Norway. The animal that Gessner found was a wild rat; we can only imagine that Norway is an excellent place for an all-white rat to call home.

Gessner saw the animal in a cemetery, which seems incredibly ominous — and we don’t want to spook you, but Gessner died after that sighting (10 years later of unrelated causes, but still).

2. They Must Have Pink Eyes to Be Considered “Albino”

There are many all-white rats in the world, but unless they have pink eyes, they’re not true albinos. Those rats are simply considered “light-colored fancy rats,” which seems to be both a compliment and a put-down at the same time.

3. Their Eyes Aren’t Actually Pink, However

Albino rats earn their name because they don’t have any pigment in their bodies, and that extends to their eyes, which don’t have a color. Their peepers get their pink hue because the light is bouncing off the blood vessels in their eyes.

Albino rats are commonly called “PEWs” by breeders, which stands for “Pink-Eyed White.” It’s not that creative but it is extremely accurate.

5. They Were the First Rats to Be Kept as Pets

This makes sense, as albinos are among the easiest rats to spot and catch in the wild (unless you live in a wintry wonderland, like Conrad Gessner did). They were first kept as pets way back in the 18th century, and they’ve been thoroughly domesticated in the years since then.

6. Albino Rats Dream About Their Days

Scientists studied an albino rat’s brain waves when navigating through a maze, and they were stunned to find out that their brains showed the exact same patterns while they were sleeping. This indicates that albino rats remember their days and relive them while they’re asleep.

Unfortunately, the scientists were unable to determine if the rats were dreaming that they forgot to wear pants while running the maze (we’ve had that same dream, actually).

7. They Occasionally Have Red Tears

Many people mistakenly believe that albino rats cry blood, much like a Bond villain. However, it’s not blood that makes their tears red — it’s a substance called porphyrin, which is believed to help protect their eyes from light.

8. Their Eyesight Isn’t as Strong as That of Other Rats

No one knows why, but PEWs have a harder time seeing things than non-albino rats do. It’s not a huge handicap, though, as most rats rely on senses other than their eyesight to get around.

9. They’re Prone to Being Dazzled

When we say that they’re often dazzled, it doesn’t just mean that they’re marks for magic tricks. It also means that they can be stunned by bright bursts of light, as they don’t have any protective pigment in their eyes to protect them.

Albino rats make a sound called “bruxing” when they’re especially happy or content, much the same way that a cat purrs. The noise is caused by chattering their teeth together. It also helps sharpen their teeth, so like with cats, you should never let your guard down just because they’re happy.

11. They Groom Themselves Constantly

While rats have a reputation for being disgusting creatures, albino rats actually spend more time cleaning themselves than cats do. In fact, they’ll spend a third of their time cleaning the various parts of their body. This saves you from having to bathe them yourself.

There are many reasons that the medical community chooses to experiment on albino rats. One is that they’re docile and tame, and another is that they’re easy and cheap to buy in bulk. However, one of the biggest reasons is that they’re genetically similar to humans, giving us accurate insights into how various drugs will affect people before human trials even start.

13. There Are Types of Albino Rats Bred Exclusively for Research Purposes

Albino rats are so popular among scientists, in fact, that several types are bred exclusively for use in labs. These include the Wistar, Sprague Dawley, Long Evans, and Lewis varieties.

14. Albino Rats Are Notable for Their Empathy and Compassion

If an albino rat sees a fellow rodent in trouble, they’ll try to help them, even at risk to themselves. They’ve been known to try to free their compatriots from cages, showing remarkable empathy and loyalty.

15. An Albino Rat Has Been to Space

In 1961, France sent an albino rat named Hector into space. Hector reached heights of 90 miles or more, and he was successfully recovered after his mission was over. Can you imagine what his dreams must have been like that night?

16. These Rats Are Notoriously Afraid of New Things

Albino rats are “neophobic,” which means they’re afraid of new things and situations, and they often take several hours to work up the courage to investigate novel objects.

Albino rats are particularly nervous about new foods, so they’ll nibble at it a bit for a few hours before they sink their teeth in. Scientists believe that this caution is because they cannot vomit.

17. Some Albino Rats Are Hairless

Hairless albino rats were bred for research purposes, as not having to deal with a bunch of fur can be useful for scientists. However, you can also find hairless albinos being kept as pets, as they’re just as easy to keep as regular rats.

18. Albino Rats Have the First Genetic Mutation That Was Deliberately Created by Humans

Albino rats existed in the wild, to be sure, but they’re far more common today than in the past because their genetic mutation has specifically been targeted by breeders. However, the mutation that created albino rats is generally considered useless, at least in terms of making a valuable contribution to the X-Men.

Albino rats are as interesting as they are cute and cuddly, so it’s no surprise that they’d be so popular. In fact, we’d have to say that if forced to choose, our favorite albino rat fact is this: They make absolutely fantastic pets.

Interested in learning more about different breeds of rats? Check out these!