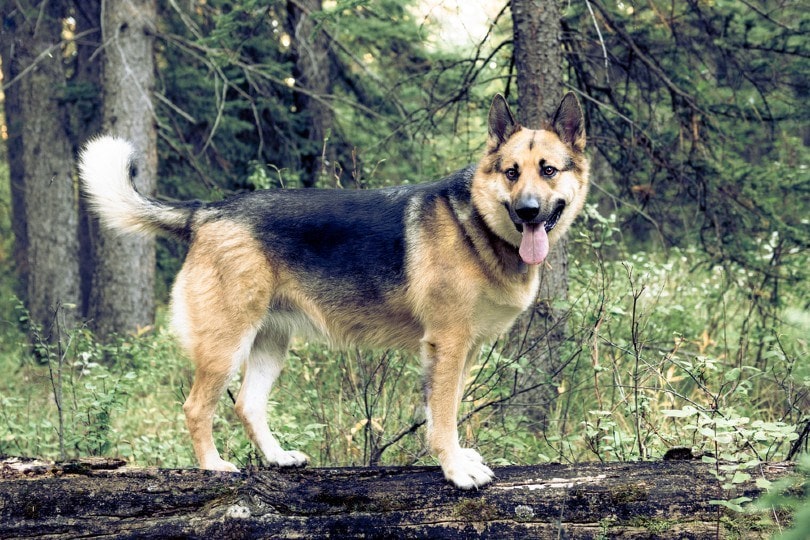 The American Alsatian, also called the North American Shepalute, is a large, unique, and eye-catching breed that was first introduced to the dog world in 1988. It was developed to closely resemble the legendary dire wolf and is a cross between a German Shepherd and a Malamute. Since then, the American Alsatian has quickly become a favorite among designer dog enthusiasts and families alike. A smart, sweet, and striking breed, the American Alsatian is a great pet for active families or individuals.

If you’re thinking about adding this wolfish dog to your home, here is your complete guide on caring for the American Alsatian.

American Alsatian Puppies – Before You Buy…

If you’re on the hunt for a large, fluffy friend, the American Alsatian might be the ideal hybrid dog breed for you. This is especially true if you’re a huge Game of Thrones fan. The American Alsatian is a kind, stoic breed that will keep a watchful eye on his human pack. He does well in both large suburb homes and smaller city apartments.

Due to the rising popularity of this designer breed, the American Alsatian is in high demand. Sadly, this has resulted in many puppy mills and backyard breeders breeding and selling American Alsatian puppies. Puppy mills are large-scale dog breeding operations that exist nationwide. The breeders have little concern about the wellbeing of their dogs and will sell the puppies at appealingly low prices. Backyard breeders, much like puppy mills, don’t invest too much energy or time into the welfare of their animals. They are generally unqualified breeders who don’t possess the proper education or experience to efficiently care for the pups or their parents.

Despite the cheap price tag of a puppy mill or backyard-bred American Alsatian, you’ll end up spending more money on health and behavioral issues in the long run. Dogs from these low-quality facilities have numerous health conditions, including mites, deformities, parasites, kennel cough, aggression, shyness, and more. In order to guarantee you’re getting a healthy puppy, it’s critical that you buy a dog from a responsible and reputable breeder that specializes in American Alsatians.

American Alsatian puppies sold from a top-notch breeder will cost between $1,800 and $3,000.

The American Alsatian was intentionally bred to resemble the prehistoric dire wolf. These massive canines tipped the scales at 150 pounds and were fierce and agile hunters.

3. They’re Not Big on Barking

If you’re looking for a vocal guard dog, the American Alsatian isn’t it. This relatively quiet breed isn’t too keen on barking at strangers, other dogs, or loud noises.

Temperament & Intelligence of the American Alsatian

The American Alsatian is a great family dog. Docile, gentle, and kind, this designer dog is loving and loyal to a fault. He is an extremely people-oriented dog and does best in a household where he’ll receive lots of affection and attention. So be prepared for daily snuggle sessions!

On the flip side, the American Alsatian can easily suffer from separation anxiety if he is left alone for more than four hours. If you work long hours or are gone for days at a time, this dog is not suited for you.

Absolutely! The American Alsatian is a wonderful family dog. He is devoted to his family and plays well with both young children and adults. Due to his large size, it’s important to keep an attentive eye on your tots when they interact with this dog. An American Alsatian can accidentally injure a small child with his large frame.

Things to Know When Owning an American Alsatian:

If you plan on making an American Alsatian part of your family, here is everything you need to know about caring for this amazing dog.

The American Alsatian needs a nutritious diet specially formulated for large dogs. Feed your American Alsatian about 3 to 3½ cups of food that is divided into two meals each day. Since he is a big breed, the American Alsatian is at risk from bloat. Bloat is a life-threatening condition and your pet should be seen by a vet immediately if he displays any symptoms. To avoid bloat, don’t exercise your dog for an hour after feeding him.

Many folks might assume that since the American Alsatian is a big dog, he’ll have big exercise requirements. Luckily, this is not the case at all! This hybrid dog breed actually is a lazy lounger that only needs about 30 minutes of exercise daily. A brisk walk around the block or a game of fetch should do the trick.

The American Alsatian doesn’t need as much mental stimulation as other breeds. Providing him with a few chew toys will keep him occupied for hours.

The American Alsatian is a natural people pleaser and can easily learn basic commands. Because of this, positive reinforcement training works best for this breed. Training should start immediately after you bring your American Alsatian home. The same goes for socialization.

The has a long, lush coat that needs to be brushed weekly to remove tangles and mats. When brushing him, check his body for any unusual bumps, lumps, and scrapes. Clean his ears and clip his nails as needed.

The American Alsatian is a relatively hardy and healthy hybrid. However, he can develop certain health conditions, such as hip dysplasia, as he ages. Routine vet visits and testing can identify a potential problem before it becomes a full-blown health issue.

American Alsatian males are much larger than females. Both genders are laid-back and loving.

If you’re seeking a well-mannered and devoted canine companion, the American Alsatian could be perfect for you. This huge sweetheart loves children, other pets, and spending time with his family. Consider adding an American Alsatian to your home today!