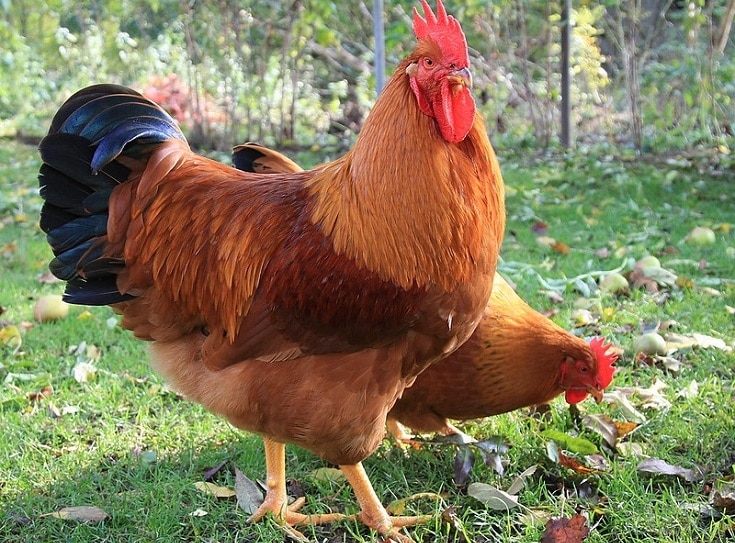 Surprisingly, there are quite a few chickens that originated from America. Most of these chickens are descended from European breeds but were bred into a new breed after settlers brought them over to America.

Americans seem to prize dual-purposes birds, likely because settlers didn’t have the option of keeping many chickens. For this reason, most American birds are still dual-purposed today. This isn’t always the case, of course, but the large majority of these breeds can be used for both eggs and meat.

While you should think that many of these breeds are quite old, that isn’t necessarily the case. Most are relatively newer, just becoming their breed in the last few decades.

In this article, we’ll take a quick look at all the breeds that are considered to be from America.

The Ameraucana was developed in the United States in the 1970s. It is descended from the Araucana chickens, which were brought to American from Chile. This bred retains the unusual blue-egg gene of the Araucana, making it one of the few chickens to lay blue eggs. The breed was first added to the Standard of Perfection of the American Poultry Association in 1984. As you can likely guess, the name derives from the words America and Araucana.

This chicken is somewhat similar to the Araucana. It still has the pea comb and lays blue eggs. However, it does not have a tail, while the purebred Araucana does. In some countries, the Ameraucana isn’t counted as its own breed. Instead, it is counted as a sub-breed of the Araucana. Often, it is labeled as the “rumples” variety.

This breed comes in a lot of different colors, from black to white to silver.

This is a particular breed of game fowl that was once explicitly bred for cockfighting. Of course, this sport is now illegal. For this reason, these birds are mostly kept as ornamental birds today.

Both the bantam and standard-sized chickens come in a variety of colors. The American Poultry Association recognizes ten colors for the Bantam version, including black, blue, and brown-red.

While this bird was primarily bred for cockfighting, they do make a good table bird. The hens lay brown eggs, though they are not prolific layers by any means.

This is an American breed that is widely popular. There is some controversy over how exactly the Brahma came to be. It seems to have been developed from birds that were imported from a Chinese port. These birds were known as “Shanghai” birds. However, this bird is likely a crossbred between the Grey Chittagong and the Shanghai birds.

In the beginning, there were many different strains of this breed, and it had many different names. However, at a meeting of poultry judges in 1852, they finally decided on a single name – Brahmapootra. This name was later shortened to simply Brahma.

These birds were exported to the U.K. in 1852. U.K. breeders then developed the dark Brahma, and the breed was accepted by the Poultry Club of Great Britain. The Brahma was the meat breed in the United States until about the 1930s. These birds are giant.

These birds come in a wide variety of colors. There are three main variations: light, buff, and dark. Inside that, however, there are also a variety of other colors these birds can come in. For the most part, these birds are still used for meat today. They do lay throughout the winter, so they also may good egg-laying hens in some cases.

This breed of chicken was developed in Ohio. It was created in the early 19th century by Nettie Metcalf, who lived in Warren, Ohio. This is the only American breed developed entirely by a woman – even though women were often in charge of their home chickens. This breed is a cross between a Barred Plymouth Rocks and a Buff Cochin and a few unnamed game birds.

The goal of the breed was to be functional and able to survive the harsh Midwest winters. In 1904, the American Poultry Association accepted the breed, allowing them to be entered into poultry shows.

This breed has never been a famous exhibition bird. Instead, it is mostly a part of small home flocks, not significant commercial operations. The average male bird is about 9 pounds, while females are around 6.5. They have yellow skin and lay brown eggs. Usually, they are mahogany with black tails, though males may have darker feathering. This breed is very similar to the Rhode Island Red, as it was crossbred during this breed’s creation.

This chicken has a reasonably stocky build, which makes it a very cold hardy chicken. This breed still carries some traits from game birds, making it a good forager and a bit assertive. However, these birds are usually pretty calm. These birds both produce good meat and lay between 150 to 200 eggs a year.

As the name suggests, this breed was bred in California. It was established by Horace Dryden sometime in the 1930s. He was trying to produce a chicken that could be used for both meat and egg production, which, he accomplished by crossbreeding a Barred Plymouth Rock with a White Leghorn.

The result was an autosexing breed, which means the gender of the bird can be determined from birth. The American Poultry Association never recognized this breed, which is largely why it is so rare today. It is also not listed by the Livestock Conservancy.

Today, they are sometimes crossbred with White Leghorns to produce the California White, a standard commercial chicken.

The Delaware chicken originates from Delaware, as you could probably guess. It was once relatively popular and essential in the U.S. However, today it is critically endangered. It is suitable for meat and egg-laying, though meat production seems to be its primary purpose.

Males usually weigh about 8.5 pounds, with hens weighing 6.5 pounds. They are considered a medium-sized breed based on these measurements. All of these birds are the same color. They have a white body and breasts. They also have light black barring at the ends of their feathers, wings, and tails. All the feathers have a white quill and shaft, and the birds have yellow skin. This creates a much cleaner appearing carcass.

There is a bantam version of these chickens, but they are exceedingly rare.

These birds are quite hardy and mature pretty fast. The hens are also good layers and mothers. They produce huge eggs and will go broody. This bird does well in free-range operations. Typically, this bird is pretty calm, but they aren’t exactly friendly.

This breed is known by several different names, including the Dominicker or Pilgrim Fowl. They are likely America’s oldest breed of chicken and are likely descended from the first settlers’ chickens brought to New England. By the 19th century, these birds were prevalent and were raised throughout the country. They’re valued mainly because they are a dual-purpose breed. Their feathers were particularly sought after for stuffing pillows and mattresses.

These birds have a pink-colored comb and light grey feathers. All their feathers have the barring pattern, which is sometimes called “hawk coloring.” The breed matures quickly and can start producing eggs at only six months of age.

These birds are incredibly calm and friendly. They like people and have a steady demeanor. They make good show birds and family pets for this reason. However, the roosters can be a bit aggressive. This isn’t always necessarily a bad thing, as they can kill snakes and even small predators. But they will also be aggressive towards you.

The hens tend to be rather good mothers, raising chicks with a high rate of success. They are good foragers as well and quite hardy. These traits are attributed to the harsher conditions that the birds were bred in. They had to be hardy to survive the harsh colonial period.

This is a rare breed of large chicken that originates from the United States. They are dual-purposed and look a lot like Plymouth Rocks and Dominiques.

This breed was created in New Jersey as a cross between several types of breeds. They were accepted into the American Poultry Association in 1949.

Despite their name, these birds originated in the United States, which no known Asian descent. It is one of the oldest breeds in America and was often bred to create many other breeds we know today. They are dual-purposed and most suited for small-scale farming. However, today they are critically endangered and tough to find.

The roosters usually weigh around 9.5 pounds, while the hens weigh around 7 pounds. They are very long and have a rectangular body, which makes them quite hardy. They have relatively small earlobes, but their combs are medium-sized. They have only one comb, which suggests that they were crossbred with a pea comb chicken at some point in their development.

They come in three primary color variations today, including black, mottled, and white.

These chickens are slow-growing, which makes them a bit less useful for meat than other chickens. However, they do produce high-quality meat and lay a decent number of eggs to boot. Their eggs are brown and rather large. The hens are good mothers and raise chicks with a high success rate.

These chickens hardly ever need supplement food, as they are excellent foragers. Like many large breeds, they are hardy against cold weather and are decently docile. They are particularly suitable for home flocks where dual-purpose chickens are requested.

As the name suggests, these chickens are quite large. They are among the heaviest of chicken breeds.  They were developed in the late 19th century by John and Thomas Black. They were initially meant to replace the turkey, which was the type of poultry primarily used for meat at the time.

While these birds do get very large, it takes a long time and a large amount of food. They are usually very calm and docile, as are most larger breeds of chickens. They lay substantial brown eggs and are known to be fair layers. The birds are quite robust and can withstand the cold well.

The males can reach up to 8.5 pounds, while the females are usually 6.5 pounds. They’re generally considered to be medium-sized chickens for this reason.

The Plymouth Rock is the American Chicken. This breed was used to create many other American breeds. They were first seen in the nineteenth century in Massachusetts and became one of the most famous chickens in America by the twentieth century.

This breed is dual-purposed and is often raised for both meat and eggs. It is relatively resistant to the cold and are good mothers with a high success rate. They lay about 200 eggs per year.

This is one of the most famous American chicken breeds. It is also the state bird of Rhode Island. This bird is dual-purposed, used for both meat and eggs. However, modern strains have been bred to increase their egg-laying abilities. Therefore, they are usually just used for eggs today.

This chicken breed has been used for the creation of many crossbreeds. The original Rhode Island Reds lay between 200 to 300 brown eggs per year. They also yield highly flavored meats.