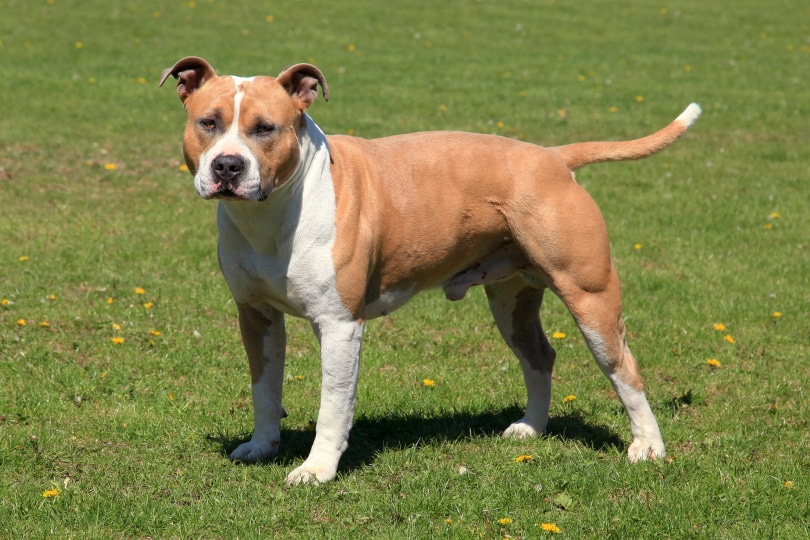 The American Staffordshire Terrier is a medium-sized breed that weighs about 40-70 pounds. They are a controversial and complicated breed that has been banned in a variety of areas, including some states in the US. This is largely due to their reputation as a dangerous breed. However, there is no evidence that they are particularly more dangerous than other breeds.

This canine was relatively popular until around World War II, which they began to decline. Currently, they are about the 85th most popular purebred dog in the United States.

These dogs are quite abundant in some areas and are common at animal shelters. If you choose to adopt from a rescue, you can expect to pay only a few hundred dollars. However, if you decide to purchase from a breeder, around $2,000 is a normal price. For show-quality puppies, you may be asked to pay even more.

While it does cost more to purchase a dog from a breeder, you may benefit from the extra cost in a variety of ways. Often, these dogs have been carefully bred for both temperament traits and physical characteristics. Sometimes, this leads to a friendlier dog that is also healthier. However, this is not always the case. Some non-pedigree Staffies are just as nice and healthy.

These dogs are often referred to as Pit Bulls. However, this technically isn’t the case. These dogs did originally come from the American Pit Bull Terrier. But they have been carefully bred over the years and have now developed into something completely different.

2. The American Staffordshire Terrier are extremely easy to train.

Despite their reputation, these dogs are extremely easy to train. They are intelligent and love to please their people.

3. This breed scores better on temperament tests than most.

This breed outscores many others on temperament tests, which simply means that it is less likely to be aggressive. They score better than German Shepherds, Beagles, and a host of other popular breeds. Despite this, they are still commonly the target of breed bans.

The American Staffordshire Terrier is a family dog, first and foremost. They are extremely people-driven and extremely friendly. They are affectionate and love to be involved in whatever their family is doing. This might include everything from cuddling on the couch to a vigorous play session. They do not make good guard dogs, as they’re more likely to happily greet a stranger than anything else.

These dogs can be quite intense. They have a high physical need that must be met. Otherwise, they can become quite destructive, chewing on just about anything they can find. They can also be a bit intense during playtime, especially if their exercise needs are not being met. These dogs are absolutely better behaved when they are properly being exercised daily.

This breed is naturally friendly with people. However, they are confrontational around other dogs in some cases. Socialization can help this somewhat, but these dogs are a bit territorial.

We recommend giving this breed a job to do, even if they are only a companion dog. Pretty much any physical task like agility training can make this dog feel fulfilled and help wear them out. They have also been successful at obedience training and other canine sports.

Yes. This is about as good as it gets for a family dog. They are very people-driven and love to play as well as cuddle. As long as their exercise needs are met, they are well-behaved and typically very gentle with children. They are often referred to as “nanny dogs” for a reason.

These families do best in an active family due to their high-energy needs. They aren’t best for families that would prefer a dog to lounge around on the couch with them all day. This canine absolutely does not fit in that category, though they will enjoy a good cuddle after a long walk.

No. This breed is not particularly good with other canines. They can be a bit territorial and aloof. Early socialization is recommended, as this can help them learn to accept other dogs. If properly socialized, some can do well in a multi-dog household. Many seem to do okay with dogs that they are raised with. The problem arises when new dogs are introduced.

If you do decide to adopt another dog while owning an American Staffordshire, we highly recommend taking it slow when introducing them to each other. This can do wonders to avoid inter-dog aggression.

Things to Know When Owning an American Staffordshire Terrier:

The Staffy does not have many food-related problems. They get along fine on high-quality dog food, whether that is one that is commercially available or one that your veterinarian helps you prepare at home. The diet should be high in meat and protein to fuel these dog’s high-energy needs. They are often muscular and active, so you should select food accordingly.

If not exercised properly, these dogs can become overweight quite easily. They are extremely food-driven, and many will continually eat until they make themselves sick. For these reasons, it is important to monitor their food intake. Otherwise, they can easily eat too much.

Of course, clean water should be available at all times.

This athletic, energetic dog requires quite a bit of exercise. Their people-oriented nature often means that they need to be exercised alongside people, however. Leaving them outside in a yard is not an appropriate choice. Long play sessions are the best option. Invest in a good set of frisbees, tennis balls, and similar toys.

These dogs are also very good at canine sports, like agility. If that’s something you’re interested in, it is an easy way to wear these dogs out.

You’ll also need to ensure that these canines get proper mental exercise as well. They are extremely intelligent and can get bored easily. For this reason, we recommend plenty of obedience training and puzzle toys to keep these dogs entertained.

These dogs are quite easy to train. They are intelligent and extremely people-driven. For this reason, they’ll pick up quickly on what you’re saying and readily respond to your commands. Puppy training classes are highly recommended. This allows the dog to meet other puppies and lowers the chance of aggression towards dogs when the canine is older. Plus, these dogs typically respond very well to training and enjoy the process.

With that said, these dogs are prone to some troublesome behaviors that may be hard to correct. For instance, chewing and digging are quite common due to their high physical and mental stimulation needs. If they are bored or not exercised, they can become destructive. The best way to avoid this problem is to keep your dog entertained and meet their exercise needs.

These dogs do not require much grooming. Their short coat does shed quite profusely, so we recommend brushing at least once a week to help remove all the dead hairs. This will help remove dirt and other debris from the dog’s coat as well.

They will develop some sort of a “smell” if they are not bathed regularly enough. Once a month is likely all that is needed for most dogs. If the dog gets particularly dirty, you will need to give them a bath as well.

Their nails should be trimmed regularly, as overly long nails can become quite painful.

This dog is generally pretty healthy. They are somewhat prone to a few different diseases, though. For instance, they are somewhat prone to skin allergies. This can be caused by food allergies as well, so you may want to keep an extra eye on what they eat. They may also be prone to urinary tract infections. Having enough water on hand is important to prevent this problem. Dehydrated dogs are much more prone to UTIs.

These canines may also develop arthritis when they are older. This is due to their larger size and high energy needs. The amount they move simply wears down their joints.

Besides that, these dogs are not particularly prone to any health conditions and tend to be quite healthy

There is little difference between the genders of this breed. They are practically indistinguishable from each other.

While the American Staffordshire Terrier does have a poor reputation, they actually make great family dogs. They get along with people of all ages, including children. They are often quite gentle as long as their needs have been met. They are quite active, so we only recommend them for active families. If not exercised, these canines can get quite destructive and bored.

If you have the time and energy to devote to these canines, they make extremely good family dogs.