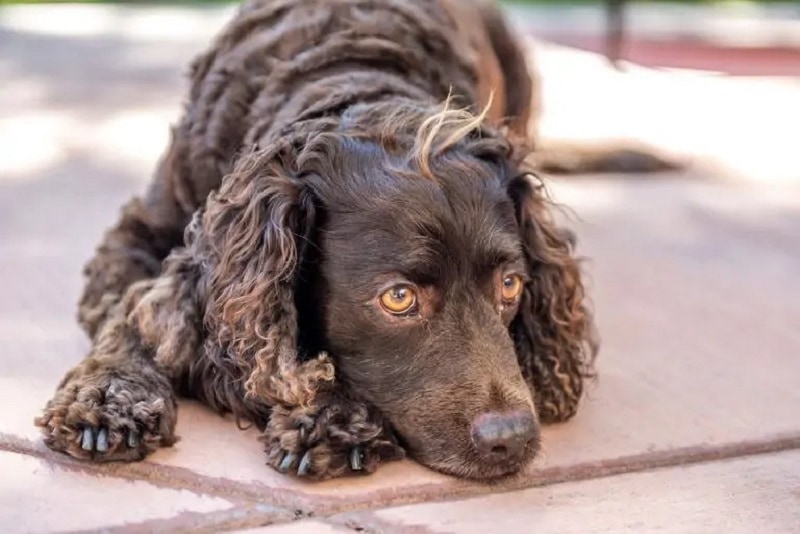 In the American Water Spaniel, you’ll find a great mix of retriever and spaniel, making these dogs perfect for long days of hunting in the field. They have thick waterproof coats that keep them warm in frigid waters with webbed feet that help them glide through the water quickly. Because they’re smaller in size, a Water Spaniel won’t rock the boat as it gets in and out. Bred to work, these dogs aren’t happy unless you’ve given them a task to perform, and if you fail to occupy your American Water Spaniel with a satisfactory job, then it could become destructive and loud.

The American Water Spaniel is a utilitarian breed. They’re bred to hunt and retrieve, and these tasks are where the breed excels. They’re not commonly kept as companion pets, so the average pricing for these dogs reflects their innate abilities and talents. Granted, they can still make excellent pets, but they’re generally bred and sold for the hunt.

All this is just to say that you should expect to spend a bit more for an American Water Spaniel than you might on another breed because of their working pedigree. You should forget any ideas of finding a quality specimen for under $1,000 because that probably won’t happen. Realistically, for an average quality American Water Spaniel puppy, you’re looking at spending $1,200-$1,800.

Keep in mind, that’s an average price for an average puppy. If you want a puppy with exceptional qualities, it’s going to cost quite a bit more. Many of these dogs sell for prices higher than $2,000, but often, these are the dogs with proven hunting pedigrees.

Don’t forget, even if you spend $1,500 to get an American Water Spaniel, your investment isn’t finished yet. There’s a lot of care that goes into your new dog, and you’ll need to get all sorts of items for it like a crate, bed, food and water bowls, vaccinations, checkups, and more. If you purchased your puppy from a reputable breeder, then it might already have been vaccinated and dewormed, but you’ll still want to take it to the vet for a checkup.

Make sure you don’t purchase an American Water Spaniel from a backyard breeder. Look for a reputable breeder that’s known for taking good care of the puppies. This way, you can ensure that you’ll get a healthy puppy that’s already been screened for hereditary conditions and was raised in a safe and sanitary environment.

1. They Become Destructive When Left Alone

Once you bond with your American Water Spaniel, it will never want to leave your side. These dogs hate to be left alone for long periods, which is why they’re only a good fit for households that generally have a member home. If you’re going to be gone at work all day five days each week with no one home to keep your spaniel company, then this breed probably isn’t a great fit for you.

Lots of dogs learn to chew and dig, but the American Water Spaniel is naturally attracted to these behaviors. You’ll probably see them starting early on, and if you want to put a stop to them, it’s at this early stage when you should take action to train such behaviors out of your dog.

If you want to add one of these dogs to your family, you’re going to have to do some searching. As far as officially recognized breeds go, the American Water Spaniel is one of the rarest. This is probably why it’s so low in the popularity rankings. It would probably be more popular if there were actually puppies around to purchase! But it’s estimated by the American Water Spaniel Club that there are fewer than 3,000 of these dogs alive today.

American Water Spaniels are known as alert and friendly dogs. They’re obedient and full of life when well trained, though they tend to be stubborn and difficult if not trained properly. This breed hates to be alone and they constantly seek out attention and affection. If you’re going to be gone from the home with no one there for long periods, this breed isn’t a good fit. Without ample attention, they can become quite loud and destructive, tearing up things in the house and barking loudly for attention.

As long as you’re providing ample attention, these dogs are energetic and playful. They want to play a lot, and they’ve got tons of energy for it. You’ll need to make sure you give that energy an outlet with plenty of mental and physical engagement, including playtime and exercise. These dogs were built to hunt, and without a job or task to occupy them, they can easily get bored and anxious.

An American Water Spaniel will take love from anyone in the family and happily return it, forming bonds with each family member. However, there’s a special place in its heart for the family member that provides the most love and affection, and it’s that family member who the dog will bond with the strongest.

This breed is generally gentle and playful with children. Since they’re not too large, these dogs aren’t going to accidentally step on a child and hurt it, making them better suited for households with kids than many large breeds. These are also very playful dogs, and you’ll probably find your kid and dog playing together all the time. In fact, it’s likely to be your child that the dog bonds with the strongest!

American Water Spaniels tend to get along great with other dogs that are of a similar size or larger. But they do have a pretty strong natural prey drive, so you need to be careful with smaller animals. These dogs were bred to chase through the brush to drive out small game, and any small animals might still trigger that instinct. Socialization will help a lot, especially if you start early and regularly socialize your dog. Even still, the prey drive could be too strong to leave small animals around your American Water Spaniel unattended.

Things to Know When Owning an American Water Spaniel:

American Water Spaniels are medium-sized dogs, rarely weighing much over 40 pounds. As such, they’re only going to eat a moderate amount of food. They don’t have any special dietary needs, though supplementing with a good joint supplement is a great idea since this breed is susceptible to hip dysplasia.

Dogs bred for the hunt, American Water Spaniels have tons of endurance and energy. While they’re usually pretty calm despite all the energy, you will still need to provide an outlet to ensure it doesn’t build up. You’ll need to exercise your spaniel for an hour or more every day. Furthermore, these dogs require a yard that they can run around in aside from that hour of exercise. Mental stimulation is also necessary for an American Water Spaniel. These are dogs that were made for hunting, and if you don’t give them some sort of task, they can get bored pretty quickly.

This breed is covered in a thick double coat that keeps them warm when they’re swimming in freezing cold waters. Natural oils produced by the coat help it to repel water, so you’ll probably end up with oily spots around your home where your dog rubbed its body. But surprisingly, this coat doesn’t require much upkeep.

In the spring, they shed the most, so you’ll need to brush your American Water Spaniel often during this season. For the rest of the year, once-per-week brushing should suffice. Limit bathing to when the dog is particularly stinky or dirty because bathing removes the natural oils your dog’s coat needs.

American Water Spaniels are rather hardy dogs, able to dive into freezing waters without worry. But when it comes to their health, there not the most resilient. There are quite a few conditions that are common in this breed, and you’ll want to watch out for signs of them to catch them as early as possible.

Between male and female American Water Spaniels, the difference is minimal. Both sexes reach the same heights of 15-18 inches. Males can outweigh females, but only slightly. The heaviest females weigh in at 40 pounds with the largest males weighing just five pounds more.

Equal parts retriever and spaniel, the American Water Spaniel is the perfect dog for hunting in frigid environments. Like most spaniels, these dogs can tear through brush to weed out upland game, but they’re just as comfortable diving into a frozen lake to retrieve your waterfowl. Of course, these dogs are good for more than just hunting and retrieving, even though they’re purpose-bred for those tasks.

American Water Spaniels also make great pets and companions. They’re incredibly friendly and loving dogs. Once you bond with one, it never wants to leave your side, and they hate being alone for long periods. If you want to add an American Water Spaniel to your family, make sure that someone’s home most of the time to keep it company. Furthermore, ensure you can provide ample engagement and activity for your spaniel. Otherwise, it will likely become destructive and loud, which is the opposite of how the breed behaves when healthy.