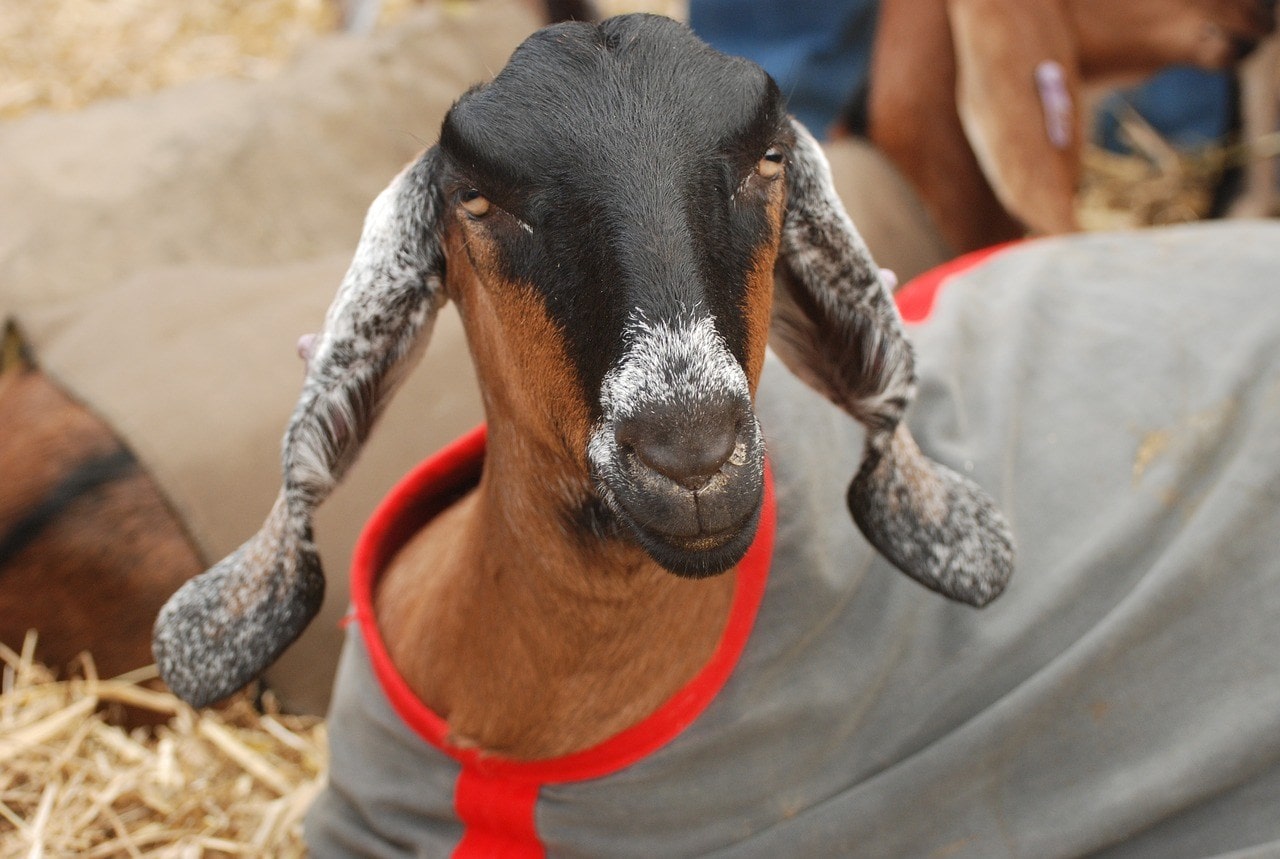 The Anglo-Nubian goat was once the primary goat raised for milk, and they are still one of the most popular dairy goats in the United States. Even though they don’t produce the high quantities of milk that many other dairy breeds can, their milk is higher in fat and superior in flavor. The breed is native to Britain, where they were developed using native goats and large goats from India, the Middle East, and Northern Africa.

They have become a popular goat breed around the world and can be found in more than 60 different countries. Nubians are multi-purpose animals that are widely bred for their milk, meat, and hide.

Read on to find out more about the Anglo-Nubian goat breed!

The Anglo-Nubian goat is a multi-purpose breed renowned for their tasty milk, but their large size makes them commonly used for hide and meat production too. Their milk boasts one of the highest concentrations of butterfat, surpassed only by the Boer, Nigerian dwarf, and Pygmy breeds. This makes their milk ideal for cheesemaking, as it has a sweet and unique flavor.

These are hardy, strong animals that have even been used to pull carts and saddle heavy weights. They are known to be highly friendly, curious, and docile animals, so they are popular as pets, as well as production animals. These goats are highly sociable animals that seem to thrive off of human interaction and love to be petted and stroked.

How Much Do Anglo-Nubian Goats Cost?

Nubian goats are a fairly common species, and as such, they are not particularly expensive to purchase. Females are typically more expensive than males, and depending on the breeder and availability, an Anglo-Nubian will generally cost between $300-$800.

One of the friendliest of all goat breeds, these animals will quickly become a family friend. Even when kept in large groups, they love human interaction and will take every opportunity to be at your backdoor bleating for your attention! They are active animals that do well in a large space where they have plenty of room to roam and forage and are extremely hardy, able to thrive in both cold and hot climates.

A word of warning: These goats are extremely loud and are known to vocalize almost constantly, whether they are happy, sad, excited, or frightened. So, they do not make good pets where there are close neighbors. This is an important factor to consider, as you’ll ideally want more than one goat, and the noise can swiftly build up!

The most distinctive characteristic of the Nubian goat is their uniquely long, pendulous, bell-shaped ears that can extend up to an inch beyond their face. They also have small, upturned tails and short and somewhat glossy coats that can be found in a wide variety of colors but most commonly, black, red, white, or tan.

They are large goats that weigh up to 135-175 pounds in weight and typically stand 30-35 inches tall. They have a long and convex muzzle, commonly referred to as a “Roman nose” and small, pointed beards. Nubians are known for their rapid growth rates, and this is what makes them popular for meat production.

How to Take Care of Anglo-Nubian Goat

Nubians are fairly easy to care for and need the same basic requirements as all goat breeds. This includes adequate shelter, plenty of space and freedom to roam, and good-quality food and water.

They’ll need a basic shelter to sleep in and to keep them warm in winter, shaded in summer, and protected from rain and wind. This space will also serve as a private space should they feel the need to be alone. The shelter should ideally be made from wood, with plenty of ventilation and airflow. If you live in a cold climate, it should be well insulated for the winter months. The shelter should also have soft bedding, like straw or hay, for them to sleep on, which will need to be changed regularly. Ideally, you’ll want the shelter to have a door that you can latch. This will serve to keep them locked inside during bad weather or while you’re away and can help keep two goats separated if the need should arise.

As a general rule, Nubian goats need around 200 square feet of space per goat as an absolute minimum, although the more, the better. This amount of space is fine for short periods if need be, but these goats are happiest with plenty of space to roam and forage. They can be safely left to wander, although they are known to eat almost anything — like all goats — so you may want to design a space that will keep them out of your flower beds and vegetable garden!

Nubians are expert escape artists, and they’ll need a sturdy shelter for sleeping, as well as high and rigid fencing. We recommend electric fencing, especially at first, as this is the best way to keep them confined to an area. Even well-built, high fences can be scaled by these nimble animals, and a simple, portable electric wire powered by a car battery is the best bet.

Nubians are playful, social animals that need plenty of entertainment to stay happy, and they’ll happily come and bleat at your back door to let you know when they are bored! Their enclosure should ideally have small trees and shrubs to provide shade and rocks or scaffolding to climb on for entertainment. This is an absolute necessity if they are not allowed to free-range.

Do Anglo-Nubian Goats Get Along With Other Pets?

Anglo-Nubians are friendly, sociable animals that get along with just about everyone, including humans, dogs, cats, and other goats. They are gentle and even-tempered animals and enjoy social interaction and seem to even thrive off contact with humans. The only issue that may arise is multiple males paired with one female. When breeding time comes, you may want to keep them separated to avoid fighting.

What to Feed Your Anglo-Nubian Goat

As any goat owner will tell you, these animals will eat almost anything! They are hardy creatures that can survive on the simplest of foods. That said, for your goats to be healthy and happy and truly thrive, they need to be fed on a staple diet of good-quality hay, especially in winter. This is their main source of nutrients besides what they forage on the range. Unprocessed, whole grains are also a great addition to their diet, but keep it moderate, as too many grains can cause digestive issues.

Nubians love to snack, and you can try a variety of treats on occasion. Fruits, vegetables, and leafy greens are great occasional snacks. If your goats do not forage much due to space, garden scraps and weeds are a great addition that they’ll love, and such greens are packed with nutrition.

Nubians are generally hardy and healthy with few health issues and long lifespans of up to 15 years or more in some cases. This is especially true if they are fed on a healthy, varied diet and given plenty of space to roam, forage, and exercise. Livestock animals left to free-range are susceptible to mites and ticks depending on where you live, though, so they may need to be dipped in a commercial tick solution occasionally.

Nubians are prolific breeders, and both males and females are mature enough to reproduce as early as 7 weeks old. Of course, this is strongly advised against, and females should only really be bred at around 8 months for best results. They typically reach full maturity at around 2 years old, and females will reach their full milking ability at this age too.

The Nubian gestation period is typically 150 days, and the breeding season lasts from July through to December. Females can give birth to as many as five kids at a time, but two or three kids are more common. Nubians are excellent mothers and are extremely caring and affectionate toward their young.

Are Anglo-Nubian Goats Suitable for You?

If you are looking at adding goats to your farm or homestead, Nubians are arguably one of the best choices. They are easy to care for and extremely low maintenance. They are also highly affectionate, friendly, and even-tempered animals that are great to keep around children. Lastly, these goats produce some of the tastiest goat milk in the world and make great meat animals too.

Even if you live in a home with a relatively small area for them to forage, Nubians are highly adaptable and hardy animals and do well in a wide range of climates and environments. This makes them ideal for novice goat keepers and experts alike!

Check out these related reads: