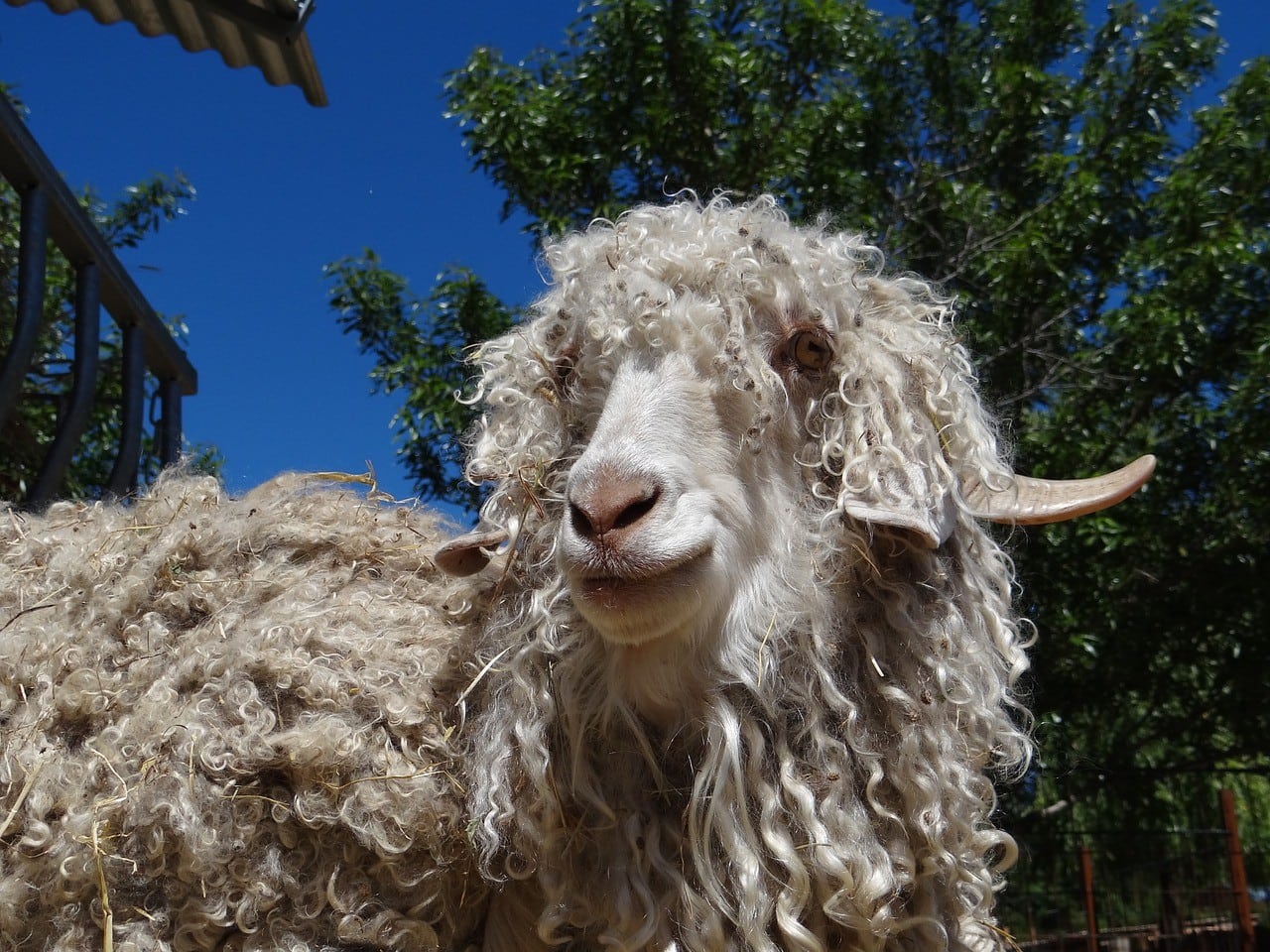 The Angora goat is a sweet-natured goat famous for its soft fleece that produces mohair – an expensive textile that is made into sweaters, scarves, and other clothing.

They originated in Asia Minor near Ankara, Turkey (which had originally been called Angora) at least 2,500 years ago. Mohair became a popular resource in the 19th century. The first Angora goats were imported into the United States in 1849, and today, South Africa and the United States are the largest producers of mohair.

Quick Facts about the Angora Goat

Angora goats have been around a very long time, dating as far back as the 12th and 15th centuries. There was even mention of these goats in the Bible and Sumerian cuneiform tablets.

Every year, the adult Angora goat produces approximately 8 to 16 pounds of mohair, making this goat one of the most effective fiber-producing animals.

These aren’t the easiest goats to take care of, as they need a certain amount of protection against inclement weather. They are thought to be rather delicate in comparison to most domesticated animals.

How Much Do Angora Goats Cost?

The price of the Angora goat can range from $300 to $650, depending on color, age, and sex. You can sometimes find starter herds, which might consist of does, a buck, and a few kids.

You can also search online for Angora goat breeders and even Facebook pages, such as Available Angora Goats to find yourself a goat.

Angora goats are known to be very docile, gentle, and relatively quiet, particularly in comparison to many of the other goat breeds. These friendly goats are quiet and calm in nature, which gives them the disadvantage of becoming the victims of aggression from different species if they are a part of a mixed flock.

Angora goats are relatively small in size compared to other goats, and they have an almost sheep-like appearance thanks to their soft and curly coats. Both the males and females have horns, but the doe’s horns tend to be smaller and shorter than the horns of the buck and are accompanied by long and drooping ears.

White mohair can be dyed quite easily, so most Angora goats tend to be white. However, there are a number of varieties of Angora goats in different colors such as gray, black, brown, red, and silver for naturally colored fibers that aren’t dyed.

How to Take Care of the Angora Goat

They will require dry bedding such as hay or straw (straw is better at staying dry compared to hay) to help keep them dry and warm.

These goats prefer sun exposure in the winter and shade in the summer. The enclosure should keep them warm in colder months and cool in the summer as Angora goats are prone to both heat and cold stress. They are particularly vulnerable to cold stress after shearing in late summer.

Placing fences around your pastures will ensure your Angora goats will stay secure as long as the fences are themselves safe. Fences that are around 3-4 feet high would be sufficient. It’s good to keep in mind that Angoras don’t tend to jump over fences but would be more inclined to crawl under one, so you need to be sure there isn’t space for them to do so.

Do Angora Goats Get Along with Other Pets?

Because of their friendly and docile natures, the Angora goat does tend to get along with other animals. However, because of their aggressive behavior during rutting season (when does are ready to breed, which generally occurs early fall and into March), you can expect some crazy behavior.

However, all goats are herd animals, and they tend to do best when with other goats or animals as they won’t do as well when alone. Just be sure to have your goats housed separately and allow for different feeding habits, and the Angora goat should get along just fine with other animals.

What to Feed Your Angora Goat

Angora goats are foragers and grazers that will even hoist themselves up on their hind legs to reach the lower branches of trees. They can be pastured with sheep and cows since they all graze on different kinds of plants.

The Angora prefers to eat brush and weeds (including thistles) but will sometimes need extra nutrition, so they are able to grow their mohair. Grass hay, alfalfa hay, minerals with small amounts of selenium, and goat feed with 14% protein (at a minimum) are all acceptable.

Of course, what and how much you feed your goats depends on age, size, and whether you have a pregnant doe or a young kid.

Lastly, your Angora goat should have constant access to lots of fresh and clean water.

Angora goats are prone to a variety of parasites and should be regularly dewormed, sometimes more than the average domestic goat. They are also susceptible to lice infestations and need to be routinely checked for lice eggs and nits and deloused.

As already discussed, Angora goats are quite susceptible to cold stress after shearing and should be kept warm. Ensure they have shelter and plenty of food, which all should be kept up for about 6 weeks after the shearing. They could also develop pneumonia if their fleece becomes wet in colder weather, so ensuring their enclosure is kept dry is essential.

You should never remove the Angora goat’s horns as they are used in self-defense and keep the goat cooler in hot weather as they help regulate body temperature.

In between shearings, the Angora goat’s coat should be checked for briars, weeds, burrs, urine, and moisture. It might be necessary to occasionally trim for hygienic reasons to avoid hotspots or maggots. You can also use a bath mitt or hand towel to wash them but be sure they are completely dry before shearing. The Angora goat’s hooves need to be trimmed every 3 to 4 months.

Breeding the Angora goat typically occurs from August/September to December/January. The doe is usually ready for mating by just being in the presence of a buck that is in rut. She will cycle every 19 to 21 days and run with a buck throughout the breeding season until she becomes pregnant.

Gestation can last from 148 to 150 days, and the kids are typically born from late February to early May. The doe usually only has one offspring a year but can have two or three on rare occasions.

Once a kid has been born, they need protection against cold and damp weather for at least the first few days. They are usually weaned when about 16 weeks old and can become sexually mature at about 6 to 8 months.

Are Angora Goats Suitable For You?

If you have the space and the time, the Angora goat is a wonderful addition to a small or hobby farm. In addition to their friendly and gentle personalities, the lucrative market for mohair makes them an appealing breed of goat. While Angora goats do require a great deal of looking after, they are worth it.