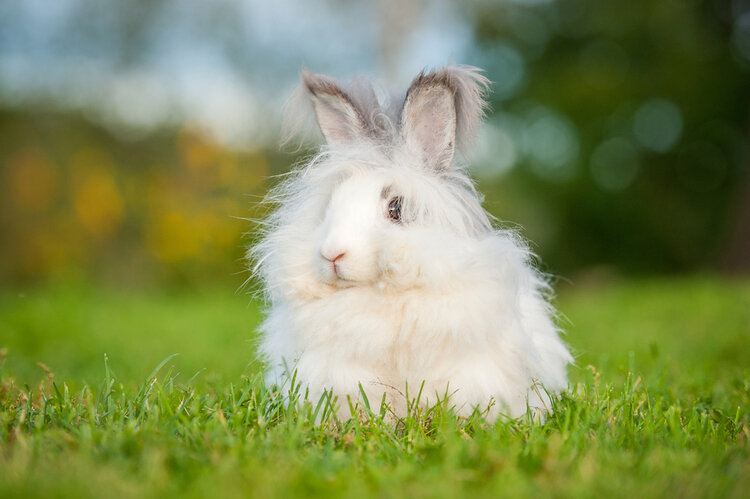 Angoras have made a big, fuzzy impression on the world of rabbit breeding since their introduction to Europe from their homeland of Ankara, Turkey. Impossible to miss, the incredibly long fur of Angoras has made them a popular option to keep as pets, where they also provide a valuable source of hypoallergenic wool.

Have you ever thought about owning one of these especially furry rabbits? Today, we’ll be looking at the Angora’s history and division into specific breeds, as well as everything you need to know to get started with their grooming, diet, and exercise. So, when you’re ready to dive into the fuzzier side of rabbitry, read on!

Hailing from Ankara, Turkey — historically known as Angora — this rabbit breed has wowed people for centuries with its prodigious fur production. Their soft and silky coats quickly led to their immense popularity as pets which could provide a source of wool, prompting them to be imported by France in 1723.

This French Angora is the surviving breed that most resembles the original ancestor of the family. Selectively bred for almost 300 years, it has given rise to the English Angora, Giant Angora, Satin Angora, and a handful of lesser-known crossbreeds. Exported to Japan, China, and the United States between 1920 and 1932, it is the base stock on which every other Angora breed today is based.

For a complete look at the detailed history of the Angora, see Bob D. Whitman’s book Domestic Rabbits and Their Histories. We’ve used it extensively as a reference in this article.

Because of their wide geographic distribution and significant differences in selective breeding, Angoras from different parts of the world can vary widely in the details of their general appearance. However, their exceptionally long fur always gives away their genetic heritage. No other rabbit has as dense, abundant, or soft a coat as any of the Angora breeds.

Usually, Angoras of all varieties will weigh between 8 and 10 pounds. Even the so-called “Giant Angora” rarely exceeds 10 pounds, and is named more for its incredibly abundant hair than an oversized body. They can be found in a variety of colors, though white is the most common.

Every breed of Angora comes with two health concerns not so commonly shared by other rabbits: Wool block and wool mites.

In the first case, a wool block can be caused by a rabbit eating too much of its own fur while grooming itself. Rabbits’ delicate digestive systems have a hard time passing this foreign matter, and too much of it can lead to impaction and ultimately death. To avoid this potential danger, every Angora’s wool must be clipped or plucked every 3 to 4 months.

Wool mites are a skin parasite that more commonly affects Angoras than any other rabbit breed, since they can nest so easily in their large volumes of hair. They will lead to patchy hair and flaky skin, and can be easily treated with a trip to the vet for skin powders or ointments.

Outside of these special concerns, Angoras require the same essentials that any rabbit needs: Lots of fresh water, abundant timothy hay, and daily servings of leafy greens. Give them plenty of room to stretch and exercise, and you’ll contribute greatly to their continued health.

Of every rabbit breed available today, Angoras require the most elaborate, frequent, and comprehensive grooming. If you have any intention of owning and caring for an Angora, you should be prepared for daily groomings with a rabbit-specific brush. During the shedding season, you may end up feeling like you’re grooming your Angora all day long!

Because of their fast-growing hair, Angoras must be clipped or plucked every 3 to 4 months to prevent any dangers to their health. Far from being an inconvenience, this process actually allows for the production of an extremely high-quality wool that is perfect for felting. Part of the joy of being an Angora owner is all of the potential projects you can embark on with their wool!

Due to their significant selective breeding, Angoras of all varieties display a very calm, even temperament. This is a redeeming feature of their constant need for grooming, and many Angoras come to love their daily brushings. Expect plenty of affection from this breed when its coat is well cared for.

Final Thoughts on the Rabbit Breed

Angoras are one of the most unique rabbit breeds available, though this comes at a cost of a significant investment of time in their grooming. If you are willing to make the commitment to an Angora’s coat, though, you’ll be well rewarded with a constant source of both wool and bunny affection.