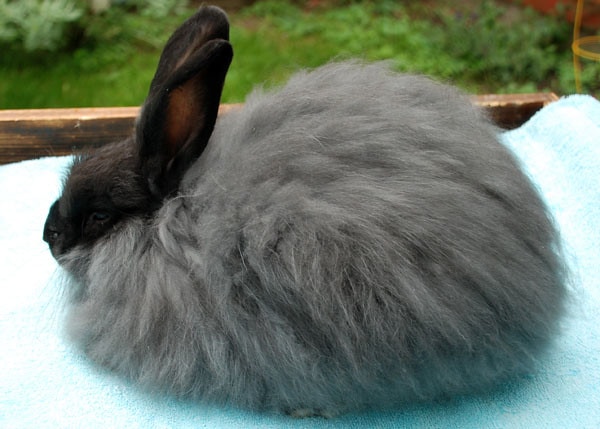 If you’ve ever seen a particularly fluffy rabbit, chances are it was one of 4 nationally recognized breeds of Angoras. Originating in Ankara, Turkey, these fascinating rabbits have been bred for centuries to produce the finest quality wool – with some breeds’ hair growing as much as three inches per season!

Whether you’re looking to keep an Angora as a pet, use it for wool production, or both, this guide will give you the rundown on the major differences between each breed of this illustrious lineage. Along the way, you’ll learn about the history of Angoras and get some helpful tips for how to care for this high-maintenance breed.

Let’s get started with the four Angora breeds recognized by the American Rabbit Breeders Association:

First recognized by the ARBA in 1910, the English Angora is the smallest of their four recognized Angora breeds. They max out at around 7.5 pounds, with most show animals being closer to 6 pounds. Though they have what may be the softest wool of all the Angora breeds, this coat also mats very easily. Because of this, daily grooming is a necessity in keeping an English Angora healthy.

The large variety of coat colors in this breed come from nearly 150 years of scientific breeding in England, originating with a French Angora which was then crossed with various colored breeds. These rabbits even have a long history in the United States, dating back to the 1840s.

While larger than English Angoras, this French breed rarely weighs more than 10.5 pounds. Its dense undercoat means that it requires less maintenance than other Angoras, though this is still considerably more than any shorthaired rabbit.

Easily identifiable by its lack of long hair on its face, the French Angora is much less prone to hair-related health problems (and therefore makes an easier pet to take care of). If you love the fluffy look of Angoras but worry about the maintenance requirements, a French Angora makes a good compromise!

As the largest of all Angora breeds, the Giant Angora lives up to its name! Often weighing upwards of 10 pounds, the Giant looks even bigger than comparable giant breeds because of its tremendously fluffy coat. Only the ruby-eyed white is recognized by the ARBA as a show rabbit.

Originally developed to be a commercial wool producer, they produce significantly more wool than the English, French, or Satin breeds of the same name. Because of their large size, Giant Angoras mature more slowly than their fellows, sometimes taking up to a year and a half to reach full maturity.

So-named for its rich and luxurious fur, the Satin Angora was developed in the early 1980s in Ontario, Canada. By crossing a wooly progeny of a Satin litter with a French Angora, Leopoldina P. Meyer created this breed’s glamorous coat and long, dense wool.

Sharing the clear face of the French Angora as well as the fine, shiny hair of the Satin, this breed has become especially popular amongst owners looking to craft clothing from their rabbits’ wool. Though it does not produce as much wool as other Angoras, it is available in a wider selection of colors.

Though not recognized by the ARBA, the German Angora is a cult favorite of the International Association of German Angora Rabbit Breeders. Smaller than other angoras, with a rich and dense wool, the German Angora lacks some of the pedigree associated with the other ARBA certified breeds, and is of uncertain heritage.

For more on this fascinating breed, we would encourage you to visit the IAGARB website here.

Because the Angora has traveled so widely, there are many breeds about which little is known of their ancestry or interbreeding. Furthermore, because these breeds are almost exclusively used for their wool production, there is little information available that is of use to home rabbit owners. These breeds include the Chinese, Japanese, Korean, Russian, Finnish, Swiss, and St. Lucian Angoras.

Although all breeds of Angora are remarkable for their long, soft coats, the differences between their five major breeds can help inform you of which might be best in your home. For maximum wool production, the Giant Angora is ideal… Whereas if you’d like lower maintenance and a more casual pet, French Angoras are the way to go. English, Satin, and German Angoras fall somewhere in the middle, with greater maintenance requirements as well as more finely textured fur.

Thank you for reading, and we hope that this guide to the Angora breed has been helpful in your research!