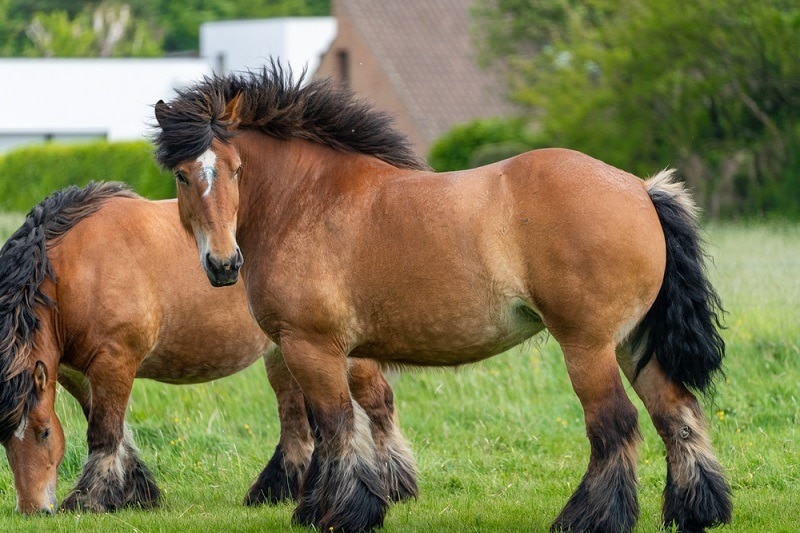 The Ardennes horse is a fairly large horse breed that originates from Ardennes, a region in Belgium. These horses have relatively heavy bones and are used primarily for draft work. In fact, they are considered to be one of the oldest breeds of draft horses in the world.

While this breed’s bloodline likely stretches all the way back to Rome, they have changed somewhat over the years. They have been crossbred with several different breeds to make them bigger and stronger. The breed with the biggest impact is the Belgian breed, which this horse breed shares many genes with today.

Quick Facts About the Ardennes Horse

The Ardennes horse has been used for draft work for centuries. They are relatively larger horses, standing at 16 hands high and weighing up to 2,200 pounds. Their legs are particularly gigantic, which gives them a lot of pulling power.

They have been used throughout history primarily as a draft horse. However, they have also been used as war horses, where they were cavalry mounts and helped move artillery. Today, they are used mostly for draft work, including competitive driving events. They are commonly used on farms where a heavy puller is necessary.

Their two most common colors are bay and roan. However, chestnut, gray, and palomino are not unusual. Black is exceedingly rare and not included in the breed confirmation, though it is possible.

How Much Do Ardennes Horses Cost?

Ardennes horses are a bit rarer than other horses on the market. However, they aren’t impossible to find in most areas, but you probably won’t find more than one or two for sale at the same time. In most areas, these horses sell for about the cost of other draft horses, which is usually around $2,500-$5,000.

The price will also vary based on the particular horse’s pedigree. Horses from a bloodline that have many awards and competition wins will likely cost more. You may be willing to pay the extra price if you’re looking to compete as well. However, if you’re just looking for a horse to work on the farm or a leisure horse, then you likely don’t need to pay this extra money. Some horses go for as much as luxurious sports cars.

These horses are known to be easy to work with, which is likely why they have survived so long. They are generally considered intelligent and patient. They learn easily and willingly, making them perfect for beginner horse owners. They are docile and calm, as most draft breeds are.

Ardennes horses tend to like their people and enjoy attention. They are great leisure horses, as they do require some attention from their owners. They may be good riding horses, though they are usually used for draft purposes.

They are relatively strong horses that can work for a long time. They’re quite people-pleasing, so they usually do whatever is asked of them.

These horses are pretty large. Not only are they tall, but they are also very big-boned. They have a heavy, broad head. Their whole body is usually quite broad and muscular. Despite their large size, they seem rather compact and very wide.

On top of their solid coat color, white markings are possible. Usually, these markings are small and restricted to only a star or a blaze.

Despite their compact size, they have a free-flowing gait and are typically quite animated. Their eyes are large, pronounced, and expressive. The ears are usually small and stay pointed forward.

Their feet are actually quite small – or perhaps they just seem small because of how big their legs are. Either way, their hooves are not nearly as large or compact as the rest of their body.

How to Take Care of an Ardennes Horse

These horses are generally categorized as “easy keepers”. This means they are not difficult to take care of and do not need a lot of care. Instead, they are pretty hardy and independent creatures. They are not particularly sensitive to extreme weather, given their size and the area they evolved. They can be kept outside, though you will need to keep an eye on their feathers.

This area is prone to skin irritation in all horse breeds that have feathers.

These horses do need a bit of grooming. They have quite a bit of feathering, so their hooves will require careful attention as well. Grooming and even braiding the feathering will be necessary, as you don’t want it to get wet and muddy.

Do Ardennes Horses Get Along with Other Pets?

As long as they are around the pet from an early age, most of these horses get along perfectly fine with other pets and animals. They are all quite good with other horses, though donkeys and ponies can make suitable companions as well. As long as all the horse’s needs are met, they typically get along pretty well. If the horses feel a need to compete, things can become a bit more serious.

Some horses will get along just fine with dogs, especially low-energy dogs that are bred to be around horses. However, some horses are a bit skittish and will not relax when in a dog’s presence. Some dogs and horses have been known to get along great with dogs, but other pairs do not get along very well. If they have not been socialized with dogs, many horses will see dogs as threats.

Most Ardennes horses will get along just fine with other farm species, like cows, goats, sheep, pigs, and alpacas. However, others may be a bit territorial, especially if they have never shared their pasture before. Close supervision is required to ensure that the animals are a good fit.

Ardennes horses and cats seem to get along fine together. As long as the cat can escape and has enough room to avoid getting stepped on, they are typically fine being allowed in the same space.

What to Feed Your Ardennes Horse

Ardennes horses are more affordable than other draft breeds because they do not require a special diet. In fact, they can survive and even thrive on low-quality forage and are great foragers in general. These horses are so good at foraging that they should not be put in a particularly rich pasture, as they may overeat and become overweight.

Generally, the Ardennes horse has a slower metabolism than smaller horses. Therefore, they do not necessarily need to be fed a lot extra. You should monitor their food and weight to ensure they are always getting enough food.

If you are working your horse regularly, supplementary food may be necessary. However, you should always use your horse’s body health as an indicator. Don’t assume your horse needs more food until they begin to lose some fat deposits.

Overall, these horses are extremely healthy. They are not prone to many health problems and seem to be generally easy to take care of. Most live long, happy lives. However, they are somewhat prone to the same disease that other draft horses are.

The muscles can not use the abnormal polysaccharides as fuel, so they eventually suffer an energy deficit. Eventually, this leads to necrosis of the muscle fiber. Luckily, this disease can be managed with diet. Instead of carbohydrates, the horse needs to eat a diet high in fat, as their muscles can use the fat as energy.

Azoturia is another common disease, which involves muscle products coming into the urine. Usually, this happens as the result of muscle damage. In draft horses, this is often related to EPSM.

Shivers is a neuromuscular disease that affects a horse’s back legs. Usually, one or both of the back legs are affected, as well as the tail. Generally, the horse is unable to pick their hind feet up without difficulty. Sometimes, owners interpret this as misbehavior when the horse really is sick. There is no known cause for this disease.

Breeding Ardennes is similar to breeding any other horse. However, these horses mature later than most other breeds, so it takes a bit longer for them to be ready to breed. Most of these horses make wonderful mothers, providing plenty of milk and rarely abandoning a foal. Twinning is somewhat common in this breed, but many horses can even support two foals at the same time.

These horses have even been known to conceive triplets, though this is still rather rare. Luckily, because they also have a rather large uterus, they are able to carry their twins to a later gestation, which improves their chance of survival substantially.

Because these horses are larger in general, their foals are also usually larger. This can create difficulties at times. Usually, the mare’s larger size offsets this, however. It becomes more of an issue when a stallion that is particularly larger than the mare is used. Often, the mare will have inadequate uterine muscles to deliver a foal due to its large size, even if she is having proper contractions.

Furthermore, retained placentas tend to be a bigger problem for draft mares in general. This problem involves the placenta not being delivered properly. Unless the placenta is removed, it can cause infection, which can be potentially deadly.

Often, draft foals are not as developed as their lighter counterparts. They usually take longer to stand and nurse. They also stay particularly vulnerable for longer, as they mature slower. This leaves more time for problems to occur and puts more work on the mother.

Are Ardennes Horses Suitable for You?

Overall, these horses are suitable for anyone looking for a draft or riding horse, especially if you want one that is easy to take care of. As far as care goes, these horses do tend to be a bit cheaper, simply because they are such good foragers.