Are Ball Pythons Nocturnal, and Can They See in the Dark? 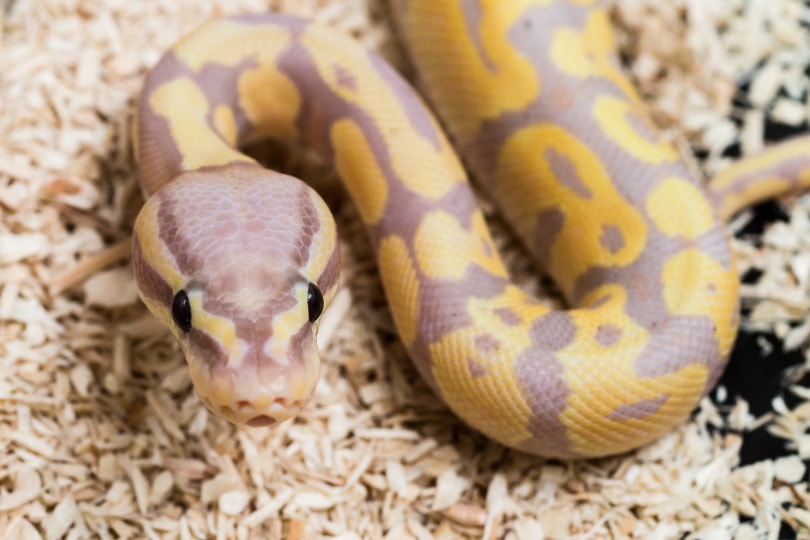 Ball Pythons have become a popular pet for reptile enthusiasts and people who are new to snakes. Owners newer to the species find that their Ball Pythons are nocturnal. They tend to prefer dark spaces and are more active at night. This behavior is because their eyes are susceptible to UV lighting, which makes their day vision pretty bad. However, they can see very well in the dark because they have developed the ability to sense infrared heat radiation.

Ball Pythons are ambush predators, meaning they prefer to trap prey by stealth, luring, or instinctive strategizing rather than chasing their game down. This means they spend a lot of time lying in wait for their prey, typically in the cover of shadows, and don’t need the same kind of sharp vision that pursuit predators need.

As ambush predators, Ball Pythons are nocturnal. They like to hunt when their prey is sleeping, as this is when they’re the most vulnerable. When it’s dark, they’re less hindered by the light and can more easily rely on their more developed sense of smell and infrared heat senses.

How Do a Ball Python’s Eyes Work?

A Ball Python’s eyes work differently from ours, though. The UV sensitivity of their eyes is high not because their eyes lack melanin, making them very sensitive to light damage.

Ball Pythons are nearsighted, meaning they can’t see objects that are far away very well. They can also only focus their vision on moving objects and perceive only a small range of colors. Furthermore, their eyes cloud over when they shed, and their vision becomes even worse.

Wild Ball Pythons live underground and have no evolutionary need for good vision like above-ground predators do.

Their “night vision” relies more on other senses, which compensate for their poor eyesight.

The pit organ contains a series of membranes, nerves, and air chambers that rapidly detect the air’s temperature and develop a thermal “picture” for the snake to observe. The pit organs have two air chambers. One chamber detects environmental heat while the other detects nearby animals.

Using these pit organs, Ball Pythons can perceive as low as 0.003 degrees of heat radiation. This allows them to be informed and precise with their decision-making. It will enable them to differentiate between objects and animals easily and even determine what kind of animal they’re sensing.

The pit organs can sense an object or creature that is almost ten feet away! As ambush predators, this gives the snake time to plan its attack. They’re able to sense the size and density of heat of an approaching mammal and make quick calculations on the threat level of the target.

Once the snake has determined the threat level, it will strike from its position to neutralize its target.

The Ball Python’s infrared heat sensing is so sensitive that it can train wild Ball Pythons. In some places where there is an overabundance of Ball Pythons, infrared heat lamps have been used to disrupt the Pythons’ heat sensing. Unable to accurately sense their surroundings in certain areas, the Pythons stopped going there, and their populations in those areas could be controlled without harming the snakes.

Snakes don’t have eyelids. Instead, they have what’s called a “brille.” The brille is a layer of skin that goes over the snake’s eye to protect it from dust or dirt. It’s ordinarily indistinguishable from the eye, but when the snake molts, the brille becomes cloudy and sheds with the rest of the skin!

With no eyelids to speak of, many wonder if snakes sleep at all. Ball Pythons sleep. Sleeping is one of their favorite activities; the average Ball Python sleeps 20-23 hours every day. Ball Pythons are considered pretty lazy when it comes to the snake world.

Their love for sleeping comes from their massive size and the amount of food they need to digest at once. Ball Pythons will swallow their prey whole, and the digestion process of a whole rodent is arduous. So, while they’re digesting their prey, they’ll usually coil up in a dark place and take a nap.

Ball Pythons usually don’t sleep for 23 straight hours. However, the amount of activity in between naps varies from snake to snake. Some owners report that their Ball Python will take a trip around their enclosure every so often, while others say that their Ball Python moves its head, looks around and then goes right back to sleep.

Owners of Ball Pythons will want to keep their snake’s usual behavior in mind. Even though their sleeping habits might seem excessive to us, they’re very typical for the snake. If your snake seems more sleepy than usual, consider what factors might be influencing it. If the snake were fed recently, they’d be sleepier, and if they’re molting, they’ll sleep for weeks without much activity.

If your snake seems listless or unwell, a trip to an exotic veterinarian can help confirm if your snake is ill or just lazy. Of course, every snake is different. Keeping track of what kind of behavior your snake normally exhibits can help you ease your worries and keep your snake safe.

Ball Pythons are a unique and wonderful pet to bring into your family. They’re a great option both for enthusiasts and new owners alike. Their infrared heat sensing is a distinguishing feature that sets them apart from other animals in captivity and the wild. We hope that you’re able to learn more about these wondrous creatures both from literature and in hands-on experience.