Are Chinchillas Endangered? What You Need to Know! 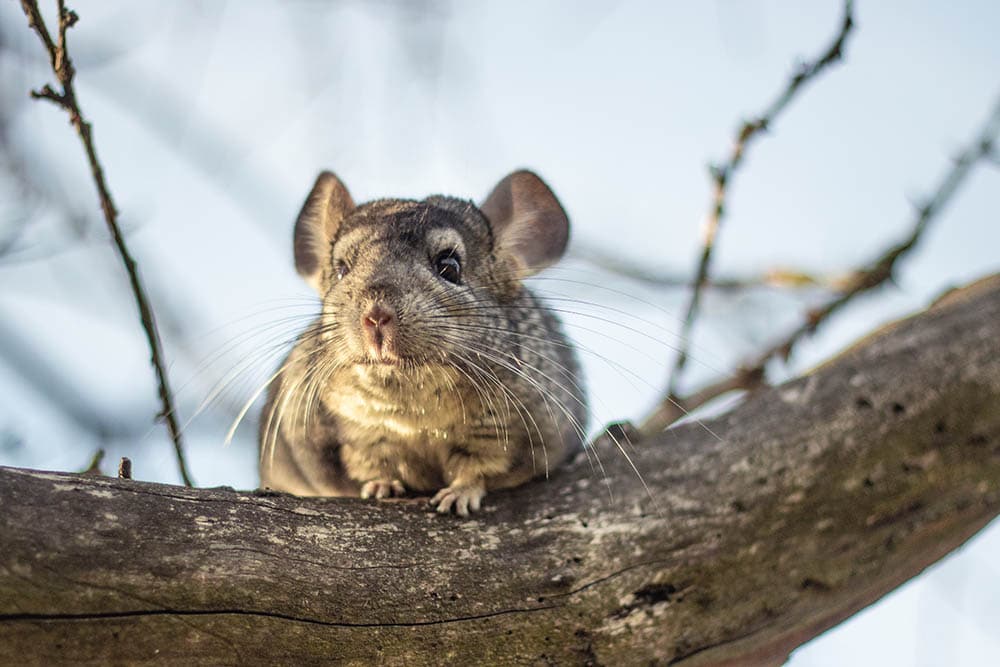 Chinchillas are a popular small pet. They’re small, relatively easy to care for, and they are clean. They do tend to be quite shy and are considered better pets for adults and quieter children, but with a lifespan of 10 to 20 years, a pet chin could be with you for some time.

Chinchillas originate from the Andes mountains in Chile. They have been and are still extensively farmed for their fur and their meat, which has seen the total population of wild chinchillas dwindle considerably. Although not extinct, this small rodent is endangered, which means that the species is at serious risk of extinction unless action is taken.

Read on for more information about this small animal and its conservation status.

Commonly found in burrows and rock crevices, chins are sociable animals that can live in herds of up to 100 animals. Once found in Peru, Argentina, and throughout South America, it is now really only found in Chile.

A comparatively long lifespan and quiet nature have made chinchillas a popular pet, especially with older children and adults. A healthy chin can live up to 20 years. However, even with regular handling, it is unlikely that the furry rodent will enjoy being picked up, although they do learn to tolerate it, which is a good job considering their thick, soft fur is very tactile.

They should be let out for supervised play, and exercise, at least once a day, and many experts agree that they should be kept in groups of at least two to ensure they do not become lonely. Loneliness can lead to depression and stress, eventually causing illness.

They require a reasonable size cage: they are much larger than hamsters, after all. They are also herbivorous, which means feeding commercial food and fresh produce, rather than insects or small animals.

All pet chinchillas sold by breeders and pet stores are captive bred. Wild chinchillas are not caught and sold to the domestic market. In fact, in the US, it is believed that virtually all pet chinchillas originate from 11 pet chins brought to the country by engineer Mathias F. Chapman, in 1923.

Although more of the Chinchilla chinchilla species are known to still live in the mountains of Chile, the total number is still only believed to be around 10,000. This represents a 90% drop in the total population in the past 15 years.

Despite having been listed as critically endangered in 2016, there has been a slight popular recovery, which has led to their classification being reduced to endangered.

Reasons For Their Endangerment

The reasons for the massive decline in the animal’s population are considered to be threefold:

Chinchillas come from cold, mountainous areas. As such, their fur is well adapted to providing warmth.  As such, their pelts have been used to make clothing and other items for centuries. Unfortunately, the chin is only a small animal, and it can take up to 100 to 150 animals to make a single coat, although smaller garments do take fewer.

Farms have already been established and most have a steady stock of chinchillas, although it is likely that some still catch wild chins to add to their population.

It is illegal to hunt and to trade chinchilla fur, but they live in mountainous and challenging terrain where it is difficult to properly monitor hunting. Poaching does continue.

Some people do eat chinchillas, although the fur is typically worth more than the meat, so this is more likely to be a secondary reason for them being hunted. Some chinchillas may still be hunted and eaten.

Although the Andes mountains have not been as fully developed as other wild areas, there has been an increase in mining in the region. Mining not only causes noise that deters chinchillas, but it leads to trees being uprooted and it means that a lot of the soil and earth around mined regions becomes uninhabitable for the little rodents. More mines mean fewer places for the chinchilla to live and eat, causing a further decline in numbers.

Experts do not believe that resale into the domestic pet market is a stressor for chinchilla numbers. Virtually all pet chins were captive-bred, and there is such a large number of them in captivity that there is no reason to hunt more from the wild.

1. They Have A Much Longer Life Than Most Small Pets

The chinchilla is a small animal that is usually kept in a cage. As such, it is often thought of as being similar to hamsters and rats. There are, in fact, many differences between all of these species with one of the most significant, for potential owners anyway, being the fact that the chinchilla can live 20 years in captivity. In comparison, hamsters and rats live around three years. Even rabbits will only usually live for approximately six years.

2. Although Quiet, They Make A Lot Of Different Noises

One of the benefits of owning a chin is that they are considered quiet animals, but while they may have hushed tones compared to other pets, they have an impressively large vocabulary. They can make ten distinct sounds, including the quiet chattering that most owners have heard, as well as a surprised shriek.

Chinchillas do have long and sharp teeth, which is characteristic of the rodent family. While they tend to be quite shy, preferring to run away rather than defend themselves, they can nip. Thankfully, they will usually only do this if they feel threatened or if they are being handled too roughly or improperly. This is also a good reason to hold your pet chinchilla away from your face and ensure that young children are supervised when handling them.

Captive chinchillas are quiet, tolerate being handled, and will live for approximately 20 years. Almost all of them originate from a group of 11 that were introduced to the USA nearly 100 years ago, and there is still a sizeable population of pet chinchillas.

The same is not true of wild chinchillas: of which there are estimated to be only 10,000 left. They are officially classified as endangered thanks to illegal poaching and hunting, as well as the destruction of their habitat, to make way for mining.