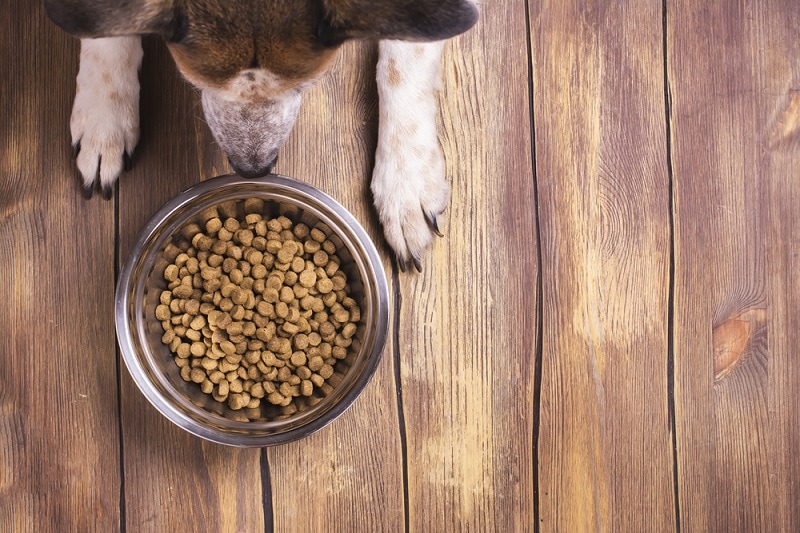 You would be forgiven for thinking that dog food manufacturers would only use high-quality and healthy ingredients in their dog food. After all, helping ensure that dogs are healthy will keep owners and pets coming back for more.

BHA and BHT are synthetic antioxidants. They were first used in the 1940s, with BHA hitting the pet food scene first, soon followed by BHT. In some respects, they can be compared to vitamin E. Vitamin E is an antioxidant and is used to keep food fresh, which is exactly the job of these two seemingly innocuous ingredients.

Not only are BHA and BHT found in dog and cat food, but they are also found in processed food for humans. Does this mean that they are safe? Let’s find out.

BHA and BHT are antioxidants, and they were first devised as a safe, synthetic alternative to natural preservatives.

Antioxidants help the body fight free radicals and they can also detoxify chemicals within the blood. They are generally considered essential, and they are just as important to dogs as they are to people.

You will see a lot of commercial dog foods boasting that they contain natural antioxidants like blueberries. These ingredients are not necessarily associated with dogs but are added for their nutritional benefit.

Because BHA and BHT are antioxidants, it is easy to see them as being beneficial additives to food. However, despite their benefits, they have been linked to cancer in canines, and thus, they aren’t a safe choice for our dogs.

Both compounds are used as food preservatives. As soon as you open your dog’s food, it is exposed to air. The oxygen causes the chemical composition of food ingredients to alter and break down. There are several ways to prevent this oxidation, including placing the food in an airtight container. This is why some commercial foods include a self-sealing bag so that you can keep the food fresh and prevent oxidation from occurring. Other solutions include adding oxygen scavengers or including food preservatives.

Food preservatives can be considered beneficial because they prolong the shelf life of food and ensure that it remains fresh and appealing.

FDA Safe, But for Human Consumption

BHA and BHT are designated as being generally safe for use, albeit in limited quantities, in human food and for human consumption.

It is important to bear in mind that there are plenty of foods that are safe for human consumption but should not be given to dogs and other animals. Garlic, for example, is considered toxic to dogs but would certainly be considered healthy for humans.

So, FDA approval does not mean that these synthetic compounds are safe.

Despite the FDA’s position, more and more groups and individuals are pointing to BHA and BHT as being potentially dangerous for consumption.

Studies have shown that BHA, in particular, is a possible carcinogen. In fact, the National Institute of Health has declared that it can be “reasonably anticipated to be a human carcinogen.”

One of the biggest issues with feeding these products to our dogs is that we do so on a regular basis. The dog has no choice but to eat what we feed it, and we give food containing BHA and BHT two or three times a day, every day. The more exposure a dog has to these ingredients, the more likely that they will suffer some type of ill effects as a result, but we still continue to feed them.

BHA and BHT are two of the worst offenders, but there are other synthetic preservatives that could be doing just as much cumulative damage to our dogs. Propylene glycol and artificial food colorings are some such ingredients.

While it is a natural ingredient, you should also look out for corn syrup. Corn is a cheap, low-quality filler that is used to bulk up foods without costing much. An excess of this product can increase the likelihood of diabetes and may cause hyperactivity in your dog.

What makes the situation worse is how readily available natural preservatives are. Vitamin C and vitamin E are commonly used natural alternatives. Rosemary oil is another ingredient that enjoys the same positive effects without proving dangerous for your best friend.

When looking for natural preservatives, they are rarely labeled as vitamin A or E. Look, instead, for the word tocopherols or ascorbic acid in the ingredient list. These are the chemical names for these ingredients and suggest the use of positive and natural ingredients, rather than synthetic and potentially harmful ones.

BHA and BHT have been used since the 1940s and 1950s. They have been added to human and pet foods and are a synthetic alternative to the likes of vitamin C and vitamin E antioxidant preservatives. These preservatives do slow the oxidation process, but both have been called out for causing tumors and potentially being carcinogens.

Look for tocopherols and ascorbic acid, rather than the synthetic equivalents. They may not be as effective as BHA or BHT, but they are healthier and carry fewer potential risks for your dogs.