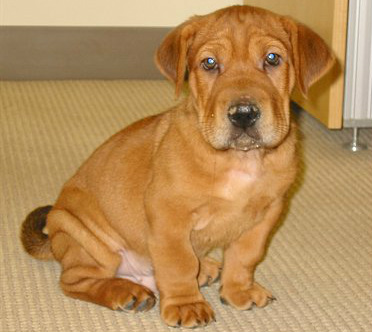 The Ba-Shar is a mixed dog the result of crossing a Chinese Shar-Pei with a Basset Hound. He is a medium to large cross breed with a life span of 8 to 10 years. The Ba-Shar is also sometimes referred to as the Sharp Asset. He has talents in watchdog and can be comedic and also quite stubborn at time.

Where does the Ba-Shar come from?

Over the last 30 or so years there have been a number of mixed breeds deliberately created. In the last 15 years or owning one has become a very popular trend amongst regular people and celebrities too. They are called Designer dogs. Most are a mix of two purebreds and have a name that blends those parent names together. Because of their popularity they have attracted the very much unwanted attention of bad breeders and puppy mills looking to make money. Unfortunately there are a very large number of Designer dogs out there being bred by these kinds of breeders so be very careful and so your research.

If the Ba-Shar has attracted your attention you need to keep in mind that while breeders may try to promise that the best of both parents go into their puppies in fact this is not something they can really control. With first generation breeding anything can happen, puppies can look like one parent or the other, or be a mix. They can be the same but with temperament, the good and the bad. Even the same litter of puppies can reflect the variations that can happen. As with many designer dogs there are no origins known for the Ba-Shar apart from that he was first bred in the USA. Therefore the best way to determine what makes him click is to look at the parents.

The Basset Hound originally comes from France when the St Hubert breed mutated leading to a dwarfed hound. They were liked so bred on purpose and then used to track hare and rabbits under brush. First mentioned in a book written in 1585 they were used primarily by French nobility. After the French Revolution the commoners kept them to hunt with as they were easy to follow on foot. The breed probably came over to America in the late 1800s but was not recognized by the American Kennel Club until 1916.
In the 1920s his popularity went up, helped in part by the advertising campaigns by Hush Puppy shoes.

Today he is laid back and gets along with everyone, children and other animals too. When indoors he is calm but outside if he catches a scent he will run off to follow it. He also can be stubborn when it comes to training. As a pack dog he does not like being left alone.

We are not exactly how old the Chinese Shar-Pei is, but his origins are Southern China where he was used as a fighter, hunter, guard dog and herder. When the People’s Republic of China formed dog breeding was negatively affected. Thankfully some Chinese Shar-Pei were in Taiwan and Hong Kong and a breeder in Hong Kong saved the breed. In 1973 a few came to America and they were recognized by the American Kennel Club in 1991.

Today this is a very alert dog who is wary of strangers and has an independent nature. To his owner or family he is devoted and he wants to spend all his time with them. He is calm but strong willed. He also has an aggressive side if he feels his family are being threatened, and that aggression can come out with other dogs. Early socialization and training are important and his owner will need to establish themselves clearly as the dominant one.

The Ba-Shar is a very intelligent dog who is very loving and affectionate and has a wonderful sense of humor too. He does have a stubborn side but he is a great companion dog who has a lot of energy and loves to have fun. He can be curious and will want to investigate everywhere. He could be a very good family dog, he is loyal, loves to entertain by showing off and soaks up all the attention he can! While he is laid back to some degree he will not like being left alone for long periods of time. He will be vocal and could get destructive. He loves to snuggle with you and will always want to be close to wherever you are. He is cautious around strangers and also with new experiences.

The Ba-Shar is a medium to large dog dog weighing 30 to 60 pounds and stands 10 to 13 inches tall. He has a body that is low to the ground and long like the Basset Hound and he has a large head, often referred to as Hippo heads. His eyes are usually brown, he has floppy long ears, short legs and a long tail that curves at the end. His coat is straight, short, rough and dense and he can have wrinkles over his body. Common colors are chocolate, cream, fawn, white, black, browns and golden.

How active does the Ba-Shar need to be?

He loves to go on walks and is a fairly active dog who also loves to play with his toys. He is a little more active when he is younger. You may want to also include bones and chew toys in his rotation as he can be a chewer. He does have chasing instinct so he will want to chase things when out. Some off leash time in an enclosed area is a good idea. But as much as he might like his walks or trips to a dog park is at heart a lazy dog and is equally happy lazing around.

The Ba-Shar is intelligent and able to learn but training can be moderately difficult so he is not a good option for new owners. It will be important to have a lot of patience when training, be firm but consistent and positive. Some owners have less problems with training than others. Early training and socialization are important, it helps him deal with other dogs, people, pets and situations and it makes him a more well rounded and better dog. Avoid any negativity, frustration or punishments.

He will need a moderate amount of grooming to keep him in good condition. He should be brushed twice a week and keep his wrinkles clean and dry. He is low shedding but is not hypoallergenic. He has flappy ears so ear infections can be an issue, check them once a week and clean them using a dog ear cleaning solution and a cotton ball. He should also have his teeth brushed at least two to three times a week and his nails trimmed when they get too long. Dog nails are not simple to cut like ours, if you are not familiar with the care to take have it done at a groomers or vets, or have them show you how.

The Ba-Shar could be very good with children with socialization, he can play with them and is affectionate towards them. With other dogs socialization can help him to be good with them. It also helps with other animals which is important as he does tend to chase them!

He can be a good watchdog and though he rarely barks he can howl. He will need 1½ to 3 cups of high quality dry dog food a day split into at least two meals. He has a very low tolerance for heat or cold so needs to be either kept in a very moderate climate or watched carefully.

As with any dog there is the possibility he might inherit health issues from his parents. With this dog that would include issues like Hypothyroidism, cancer, skin problems, patellar luxation, bloat, OCD, eye problems, Swollen hock syndrome, joint dysplasia and allergies. To lessen the changes of having a dog have any of these problems buy from a trustworthy breeder and ask to see health clearances for the parents. It is also a very good idea to visit the puppy at the breeder’s place to check on conditions and health of other animals. Any breeder who does not want you to visit should ring alarm bells and you should move on.

Costs involved in owning a Ba-Shar

The Ba-Shar puppy can cost between $650 to $1900. Other costs that you may have to cover if they are not included in the puppy price include a collar and leash, carrier bag, crate, vaccinations, neutering, chipping and blood tests. These come to between $510 and $550. Yearly medical costs just for basic needs like check ups, flea prevention, shots and insurance come to between $485 to $600. Yearly non-medical costs for essentials like training, license, food, treats and toys comes to between $510 to $600.

The Ba-Shar could be a great dog but training may be something that requires patience, so if you are short of that it might be best to look at other dogs! He will entertain you and be completely loyal to you. He has a unique appearance and is good for less active people.