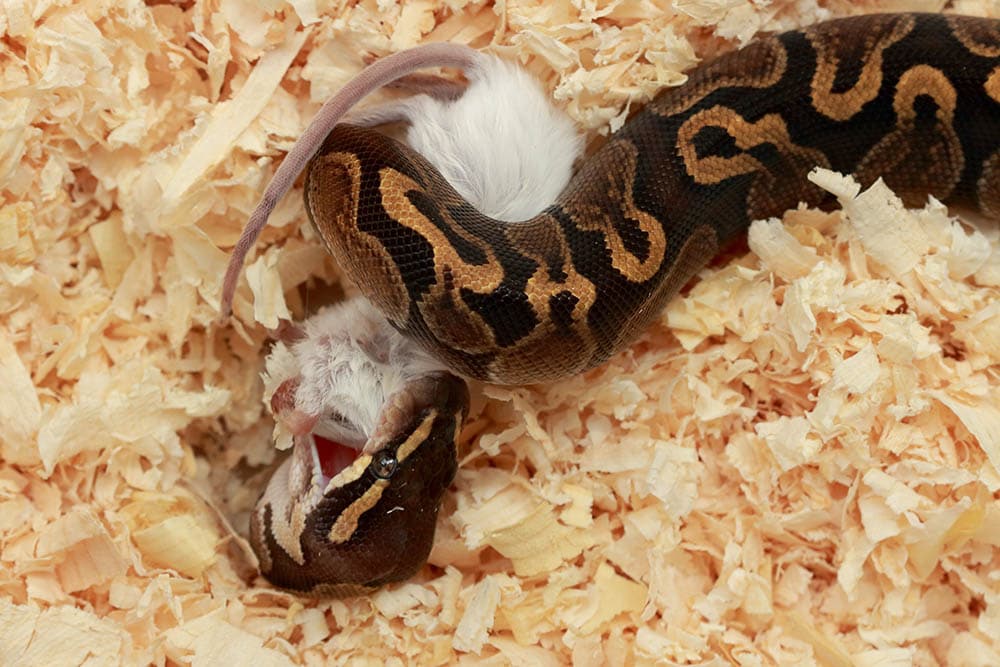 In the wild, Ball Pythons feed on common pests around Africa, including live birds, mice, and rats. Whenever a Ball Python is a pet, their diet primarily consists of rodents, but they will eat either pre-killed or live prey.

Whether you are an experienced snake owner or this is your first time owning one, a Ball Python feeding chart can help you keep your snake healthy for longer. In this article, we are going to tell you everything you need to know about feeding your Ball Python.

What to Feed a Ball Python

One thing that is important to know about Ball Pythons is that they are ambush hunters. This means that pythons will wait for their prey and attack whenever one passes. You might be wondering why this matters if you have a pet Ball Python.

How frequently you feed your Ball Python depends on its age. Here is a helpful feeding schedule based on the snake’s age, snake’s general weight, and the size of the food:

How to Feed Ball Pythons

If you have a Ball Python, you have two feeding methods to choose from: live prey or pre-killed prey. On the one hand, live prey creates a more similar hunting experience for the snake and may be less gross for you to watch, but live prey can also injure your snake during the hunt.

On the other hand, pre-killed prey is frozen and needs to be thawed out, which can be a bit difficult to stomach. Additionally, Ball Pythons that have already been fed live prey may take a bit more time to adjust to the pre-killed option. Still, Ball Pythons will eventually eat the pre-killed food.

No matter which option you select, it’s best to feed your Ball Python at night. Because these snakes are nocturnal, that is when they are more prone to eating. Now, let’s look at how to feed a Ball Python based on each feeding method.

How to Feed a Snake Live Prey

Whenever you feed your snake live prey, make sure it is the proper size for your snake. The animal should not be larger than the snake’s widest point. Additionally, ensure that the prey does not have any signs of injuries or parasites.

Using tongs, gently lift the prey up by the tail and begin to put it in the python’s enclosure. Do not place the prey on the enclosure’s floor because it will fight back, potentially harming your snake in the process. Instead, use the tongs to dangle it above your snake so that it can strike.

How to Feed a Snake Frozen Prey

Feeding a Ball Python frozen prey takes a bit more prep work, but it is pretty simple. You will need to defrost the prey inside your refrigerator before feeding. This will typically take about five hours for a rat or two hours for a mouse. Do not dethaw the prey in the microwave because it may not heat properly, or it can explode.

After the prey is thawed, put it inside a plastic bag and place it inside warm water. Let it heat up to about 110 degrees Fahrenheit. Once it has reached the proper temperature, dry it off and use tongs to lift up the prey by its tail.

Because this animal is already dead, it won’t fight back, meaning you can place it on the floor of your snake’s enclosure. Remove the animal if your snake has not eaten it within 12 hours.

Tips For Feeding Your Ball Python

Although feeding a Ball Python is relatively straightforward, there are some tips you may want to keep in mind. These tips can make the process easier and ensure your snake is healthy.

Feed the Snake in a Different Enclosure

Even though snakes are not the most intelligent creatures, they pick up on trends. If you feed your Ball Python inside its regular enclosure, it may begin to associate you opening the cage with being fed. As a result, the snake may strike when you open the enclosure or try to escape.

Do Not Hold the Snake 72 Hours After Feeding

Although it may be tempting to hold your snake as soon as it is done feeding, fight this urge for at least 72 hours after the snake has fed. Because reptiles have such a slow metabolism, it can be very stressful to be held after eating. Waiting 72 hours to hold your snake means that it won’t become stressed or regurgitate its food.

Unlike other animals, Ball Pythons do not need vitamins or supplements if they are given the right environment and food. Focus your attention on those things instead of finding a good supplement for your snake.

Because Ball Pythons have such low metabolisms, only feed the snake as often as it needs. Familiarize yourself with the chart above to know how much you should feed your snake. You can select live or frozen mice, rats, or chicks for food. Being diligent in providing your snake the proper diet can help it stay healthier for longer.