Do Ball Pythons Have Good Vision? What You Need To Know! 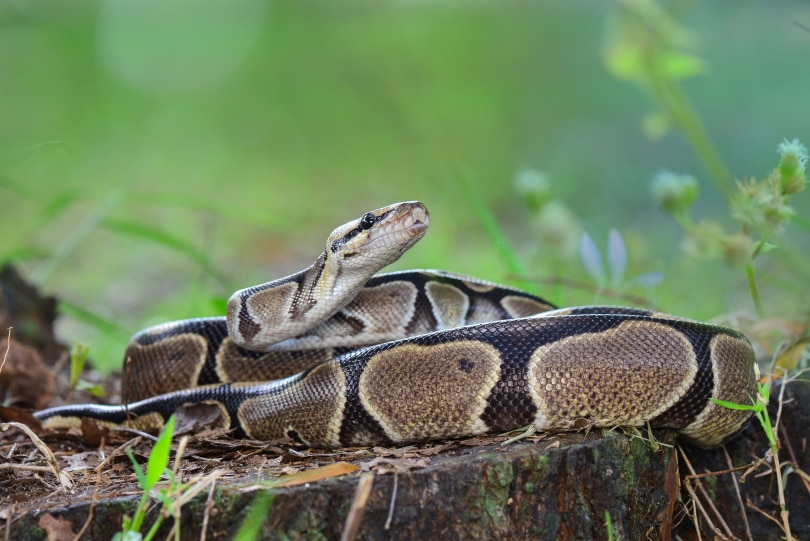 Whether ball pythons have good vision depends on your definition of “good.” Ball pythons are obviously very different from humans, and thus, they have very different eyesight features. However, that doesn’t necessarily mean that their eyesight is bad – just different.

For instance, all ball pythons are short-sighted. In other words, they can’t see far away. You don’t really need to when you’re underground, which is where ball pythons spend much of their time!

They can also only focus on moving objects. As predators, they don’t really need to focus on still objects. After all, all of their prey animals are moving creatures. This trait may also help them spot moving creatures better, which would obviously help with hunting.

Like most predatory animals, they cannot see colors very well. It isn’t that they can’t see colors at all. Instead, their eyes are simply better at picking up movement – not color. Most of their prey items use camouflage to some extent, so seeing color really wouldn’t be helpful.

Plus, ball pythons are nocturnal, which makes seeing color difficult anyway. Most animals that do see in color don’t see very well at nighttime. Just look at us!

To make up for some of their lesser visual abilities, these snakes can detect infrared radiation. This trait allows them to detect living animals better, which is useful when you’re spending much of your time in darkness. They also have a very developed sense of smell, which also helps with hunting and navigation.

Furthermore, they also have particularly bad eyesight when they are shedding. During this time, their eyesight is cloudy, as the skin over their eyes blocks some of their vision.

It isn’t that ball pythons have bad vision – just that they see in a different way than we do. They evolved under very diverse circumstances, so they require alternate traits.

For a long time, we considered all snakes to be colorblind. However, we now know that ball pythons actually have two types of cones. Cones are the part of the eye that detects colors. Therefore, it is likely that ball pythons can see two different colors.

Everything they see is in the shade of one of those colors, black, or white.

As an example, we have three different kinds of cones that can detect blue, red, and yellow. All the colors we see are either these three colors, black, or white. Ball pythons will see similarly, minus one of the colors.

However, we can’t tell what colors ball pythons see and which ones they don’t. Until we can see through their eyes, we won’t know.

With that said, some experts have suggested that they can see blue and green. It is unclear if they can see yellow as well.

Can Ball Pythons See at Night?

Ball pythons do have “night vision.” However, they likely can’t see as well at night as you’d expect.

It isn’t that they can see at night just as well as they can see during the day. Nighttime does not look like daytime. However, their eyes are built towards detecting movement – not color. They have a high concentration of rods that allows this to occur.

However, rods don’t help cones work better. The ball python still won’t be able to see colors at night. Everything will be on a greyscale, similarly to how we see at night – only with more distinction.

UV light also makes it fairly easy for ball pythons to detect prey items, like mice, which would otherwise be more difficult to find at night.

Are Ball Pythons Sensitive to Light?

Ball pythons are nocturnal. In the wild and in captivity, they spend most of their active time at night. However, this doesn’t necessarily mean that they are sensitive to lights.

In most cases, it is recommended that ball pythons in captivity be given lighting. The lighting doesn’t have to be particularly bright, as it is mostly around to help establish a clear day/night cycle. In most normal homes, this can be achieved without providing the reptile with its own light.

Often, the light coming in from the windows and brightening up the house is enough. Do not use night lights, as this may upset their natural rhythm.

However, there is a slight debate when it comes to albino snakes. Albino ball pythons are quite popular and widely available. The trait does not seem to have too many negative effects on the snake, unlike other animals.

With that said, it is possible that albinism can cause a ball python to be more sensitive to light. In these cases, you may want to lessen the lighting around the snake. That doesn’t mean remove it completely – even albino snakes will need some amount of light to determine a wake/sleep cycle.

However, you probably shouldn’t keep your snake near a window or use a reptile light if they have albinism. This may irritate their eyes, though we don’t have any specific scientific information to back this up.

Red bulbs are often advertised as “nighttime” bulbs, as it is thought that reptiles cannot see them. However, we don’t actually know if this is the case.

As we previously stated, ball pythons do have two different cones in their eyes, which means that they can see two different colors. However, we don’t know which two colors these actually are. Therefore, they could very well see red. There is no solid way for us to find out for sure.

The theory behind the red light is actually derived from how humans detect light. Red light does not interfere with a human’s sleep cycle in the same way that blue light does. Therefore, it is often recommended to use red or yellow lights at night when you want to see but also sleep.

While red lights won’t disrupt a human’s sleep cycle, we don’t actually know if they work for reptiles. We don’t know how red light disrupts their sleep or whether they can see it. You’ll hear different opinions from different people.

Some keepers are quite certain that their snakes cannot see red light, while others report negative effects. Therefore, we highly recommend avoiding red lights if possible. Ball pythons really don’t need them, after all.

Ball pythons certainly have different traits for seeing compared to people. They are short-sighted, and their eyes don’t focus quite as well as ours. It is likely that they can only focus on moving objects, like their prey animals.

These snakes can see some colors. They do have two different cones in their eyes; we just don’t know what colors they can see – and there is no way to know unless we figure out a way to ask them.

They can see movement better than we can, thanks to an increase in rods. These rods also help them see better at night, though they still can’t see colors at night.

Like most snakes, ball pythons can sense ultraviolet light, which helps them get around at night as well.  This sense helps them locate prey animals.

If you ask a ball python to spot something colorful in the distance, they won’t be able to do it as well as a human. However, they can see things that we can’t see. Therefore, it isn’t necessarily that they have bad vision, just that it is different from ours.