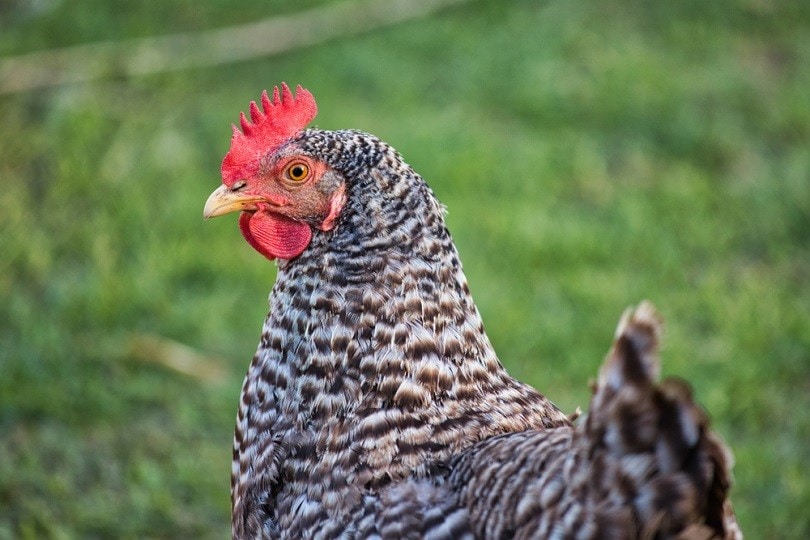 If you are thinking about adding chickens to your homestead or mini farm, you’ll be hard pressed to find a chicken that beats the Plymouth Rock. This breed is incredibly sweet and docile, but they also produce great meat and lay a lot of eggs.

Plymouth Rock Barred Rock chickens have been a favorite among American poultry owners. They are incredibly docile and friendly, yet they are also great for meat, egg production, and cold climates.

Plymouth Rock chickens come in several varieties, but the most common is the Barred Rock. Barred Rocks have a very unique look, complete with black and white stripes. This helps them to stand out from the rest of their flock.

These large and hardy birds are ideal on small farms because they are gentle yet highly productive. At the same time, they are a great meat and egg source, especially for farms in moderate to cold climates.

As we already mentioned, Barred Rocks can be pretty big. They can weigh up to 8 pounds. They are considered single comb and lack feathers on their legs. Additionally, they are not crested and have 4 cute toes.

Cocks will have striping of equal width. Hens, on the other hand, will have wider dark bars, in comparison to their white bars. This makes them look darker than the cocks.

Barred Rock chickens are really beneficial to have on a small farm because of their dual purpose. They can put on quite a bit of weight, allowing them to have tasty meat. At the same time, they produce a whole lot of eggs.

All around, Barred Chickens are a super great breed because they are friendly and productive on a farm.

How Much Does the Plymouth Rock (Barred Rock) Chicken Cost?

Even though other breeds of Plymouth Rock chickens are relatively rare, the Barred Rock is highly populous. As a result, they are considered incredibly affordable, costing much less than other chicken varieties.

Even though chickens can sometimes be a bit nasty, Plymouth Rocks are docile and friendly. Even though they’ll be happier out roaming, they do pretty well in confined areas as well. The one exception to this generalization is that roosters can be bullies, but the hens are generally sweet.

Because of the gentle behavior of this chicken type, they are a favorite among farms with children. These chickens are not likely to bite or scratch. Instead, they are laid back and sweet.

Plymouth Rocks are considered a sturdy and heavy breed. Their bodies are complete with a full breast and vivid yellow legs and beaks. Meanwhile, their comb and lobes are a bright red color. Their feathers are striped with black and white. This coloration makes these birds stand out amongst the flock.

There are also other varieties of Plymouth Rock other than the Barred Rock. For example, there is a White, Buff, Buff Columbian, Columbian, Silver Partridge, and Blue Laced. Most of these varieties, with the exception of the Barred Rock and White rock, are pretty rare.

How to Take Care of The Plymouth Rock (Barred Rock) Chicken

Barred Rock chickens are considered winter hardy birds. As a result, they actually do better in cooler environments, unlike most other chickens.

Plymouth Rocks love having room to roam and play, but they need a secure coop. Because they lay so many eggs, they need a place where they can nest. Within the coop, they need a private nesting box and perches for roosting.

Additionally, add a nesting box. The nesting box provides a place for the chickens to lay their eggs. Make sure to add a dry bedding to the nesting boxes for comfortability.

Barred Rocks like colder temperatures. In fact, they are one of the best chicken breeds if you live in a cold environment. It is best to keep the coop cool. For coops in the summer months or hot environments, make sure there is adequate ventilation and shade so that the coop doesn’t get too hot inside.

Light plays a big factor when it comes to your chickens. During the winter months, it’s a great idea to add soft yellow light to your chicken coops to aid your hens lay eggs. When using lighting, make sure to put it on a natural timer so that it goes off at night.

You should use straw and hay as the bedding in your Plymouth Rock’s coop and nesting box. This will create a springy texture and nice smell that draws chickens in.

Does the Plymouth Rock (Barred Rock) Chicken Get Along with Other Pets?

You do need to be careful when introducing a Plymouth Rock to other pets, however. Even though they may be kind and good natured, many other animals would love to eat up a fat, nice chicken. Be sure to keep any aggressive animals and pets away from your coop.

What to Feed Your Plymouth Rock (Barred Rock) Chicken

One benefit of chickens, including Plymouth Rocks, is that they are pretty easy to feed. Generally, you should feed your chicken quality chicken feed and the occasional table scraps. However, you should not feed your Plymouth Rock chicken any processed foods, rotten foods, avocado, meat, and potato skins.

If you want to use your Plymouth Rock chickens for egg production, also consider giving them a calcium supplement. You can simply select an egg layer feed or apply crushed up egg shells to their regular feed.

Make sure that your chickens have 24/7 access to water as well. It’s a good idea to use platforms or hanging water feeders so that the water is clean and free of debris.

Plymouth Rock chickens are pretty hardy and don’t have special requirements for care. Most importantly, just make sure to feed them a healthy diet and plenty of water. This is especially true if you are using your chickens for egg purposes. Invest in a good quality chicken feed and secure water feeder.

Additionally, provide them with a safe coop to live in. Chickens are prey animals. There are a number of other animals that would love to get their jaws around the neck of your plump little Plymouth Rock. The coop should be secure, well lit, and have a nesting box and roosting perch.

During cold weather, you may need to take care of your rooster’s comb and waddles too. Other than that, your Plymouth Rock chicken should withstand just about anything.

Most chickens that are known for their breeding abilities are called broody. Plymouth Rock chickens aren’t particularly known for broodiness, but that does not make them bad mothers. In fact, you can easily encourage this breed to reproduce and for the mothers to be good sitters.

As for the chicks, they are really fast to mature. It only takes 8 to 12 weeks for them to be considered as broilers.

The fact that Plymouth Rocks are good mothers and don’t brood very much gives you the best of both worlds. It provides you with a great mother that can also lay eggs nearly year around.

Is The Plymouth Rock (Barred Rock) Chicken Breed Suitable For You?

Plymouth Rock chickens are great for you if you are a homesteader or have a small, local farm. These chickens will provide you great meat and eggs, all while being friendly and docile to your family, pets, and children.

Really, the only reason you should not get a Plymouth Rock chicken as if you live in an extremely warm environment. Since they are better suited for the cold, they will get hot in warmer environments. Still, you can work around this issue by pimping out their coop with an AC, fans, or some other cooling feature.