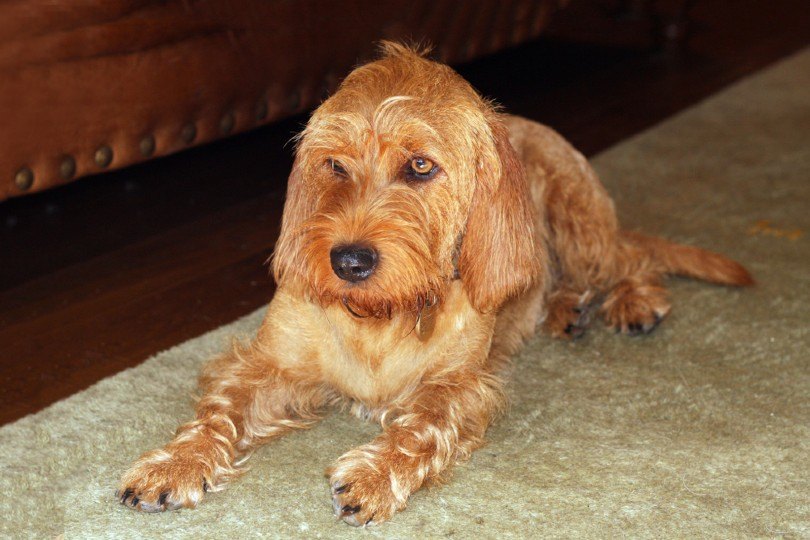 While many dogs come from royalty, this dog came from the humble French commoner who needed help hunting after the French Revolution. Since many commoners hunted on foot, they needed a dog that was slower but could also track and hunt game with ease.

These loveable dogs now are social creatures that love to have all the attention possible. They are a small package with great energy and just a dash of stubbornness. If you want to know more about this small breed, then read on.

While it may be tempting to bring home a Basset Fauve de Bretagne puppy, there are a few things you need to know before you bring one home. Yes, they are super adorable and they look like little teddy bears, but they are so much more.

These dogs are incredibly intelligent animals, meaning your home has to be puppy proof. They have so much energy to spare that they can be a handful if you aren’t prepared for it. As you can see from above, they are going to be wanting to run and play as often as possible.

Since they were bred to be hunting dogs, that nose is going to get them in trouble. If something smells good to them, well, they are going to find it. Being a slightly stubborn breed, they may not want to train on your terms. Just keep going and be patient with your dog. They are highly intelligent, but they can be easily distracted by their nose.

When it comes to the price of a puppy, it ranges from $1,300 to $1,500 USD. Depending on the breeder and how many puppies there are in the litter will change the price. The average litter size is 4-6 puppies.

Don’t just go with the breeder that offers you the best deal, though. As tempting as it is to save a few hundred dollars, if it sounds too good to be true, it probably is.

Always go to a quality breeder that knows what they are doing. Go to the facility or have a way to see the dogs before you purchase one. Once you can see that the dogs are in good health and have a great place, then you can talk about getting one. Know what you are getting before you get it.

1. They Came from a Now-Extinct Breed

2. These Aren’t Your Royal Dogs

In 1789, after the French Revolution, the Basset was developed. When the aristocratic privileges were abolished, that meant anyone who wanted to hunt could have a hound. Since many peasants didn’t own a horse, they needed a dog that they could keep up with. Why they kept getting shorter is up for debate. How is also a matter up for debate. What most likely happened was the smallest of the dogs were bred to the smallest.

By the 19th century, the hound packs in France were exclusively Bassets and they were used to hunt rabbits, hare, foxes, deer, and wild boars. It was during the WWII era that the Bassets almost met their end to everyone but the French. Today they are still used as hunting and family dogs in France, but are slowly becoming more popular here in the United States. There aren’t many breeders of this dog just yet here in the United States, but they are coming about.

However, their sweet natures more than make up for them being just a little stubborn about training. They are affectionate dogs that love curling up with you and sitting on the couch after a long day of play. This can even be seen with children.

Training can be a little difficult, though. They are stubborn and need a confident owner who can display that they are in charge. Without that, they can be a handful to train and sometimes housebreaking is the hardest task for them.

With proper training though, they can be amazing dogs that love to work. When outside, a fenced area is ideal to keep your dog on a leash. They are known to wander off and chase a smell they like. It is why car accidents are some of the top reasons these dogs pass on; they follow a smell into a street. When this happens, they either don’t hear you or it is hard to get their attention back and towards you. Only allow your dog off leash in safe areas where they can’t get hurt.

A post shared by Hi my name is Gramps! (@gramable_gramps)

Since they are so playful, children have an easy time getting along with these dogs. It is very unlikely that they will knock your toddler over accidentally since they are on the smaller side. Most likely they won’t be underfoot so they won’t be a tripping hazard either unless you have a fantastic smelling piece of food.

Every dog is different and while one dog may be great with other pets, another might not. It is best to keep these hunting dogs away from small animals like rabbits, ferrets, and rodents. They have been bred to hunt these creatures so they wouldn’t be a good mix to your household.

Things to Know When Owning a Basset Fauve de Bretagne:

Like any dog, the Basset Fauve de Bretagne does extremely well on high-quality dog food. This can be anything from commercially manufactured to home prepared meals. When going for the meals prepared at home, they should be regulated and approved by a veterinarian to make sure your dog has all their needs met.

Any diet that you select should be appropriate for your dog’s age. As a dog changes age, their dietary needs change. Also, when feeding your dog, avoid excessive treats. Too many and a dog can easily become overweight, even with an active dog like the Basset Fauve de Bretagne.

These dogs are highly energetic and love to play. They need regular exercise to keep their entertainment up. When walks happen, they need to stay on a leash. Since they are prone to wanting to follow their nose at a moment’s notice to go find what that unfamiliar smell is. They don’t need a vast space to play in, as they love indoor activities too, like playing hide-and-seek. However, they require at least a daily walk and mental stimulation to keep them busy. These dogs do great with agility sports for dogs and training classes.

These dogs are on the stubborn side of training. They want to learn, but their drive as a scent hound can get them to be easily distracted. Training needs to start young with the Basset Fauve de Bretagne because the scent can override the brain and leads to ignoring your commands. They are incredibly intelligent dogs, meaning they need the mental stimulation to feel their best.

Since they are extremely outgoing dogs, going to training classes and being social is a great way to keep your dog entertained and happy. Just know they can be stubborn about what they want to do at times if you don’t have their interest.

Thankfully, they don’t require that much grooming. Some breeds need extensive daily grooming, but the Basset Fauve de Bretagne is almost a wash, and they are good to go type of dog. Their coarse, wiry coat helps repel dirt and resists matting. They need weekly grooming with a fine-toothed comb, and then a stiff brush.

Shedding is seasonal, and even then, they lose little hair. A trip to the groomers for nail trimming, teeth brushing, and ear cleaning should be done regularly.

Just like any dog, the Basset Fauve de Bretagne can have health problems. However, it doesn’t seem to be any that are more prominent in the breed either. As they have a hunting background, they were bred to have a good bloodline. A hunting dog with serious health conditions wasn’t a dog that could be used. Just like any other breed, though, that doesn’t mean that they don’t come up.

Now that you know you want this breed, the final question is male or female. Lucky for you, there is really no difference between the two dogs. They are about the same size, same weight, and have the same energy levels. The only difference is personal preference. You can’t go wrong with this breed!

The Basset Fauve de Bretagne is a stunning little hound dog with a huge personality. They are great family pets and despite their small size; they give huge amounts of love. Just be prepared to give your little dog the time and attention they need because they don’t enjoy being alone. You are their pack now, and that means you are family.

You may even find that you end up learning along with your dog about how to stay active both physically and mentally.