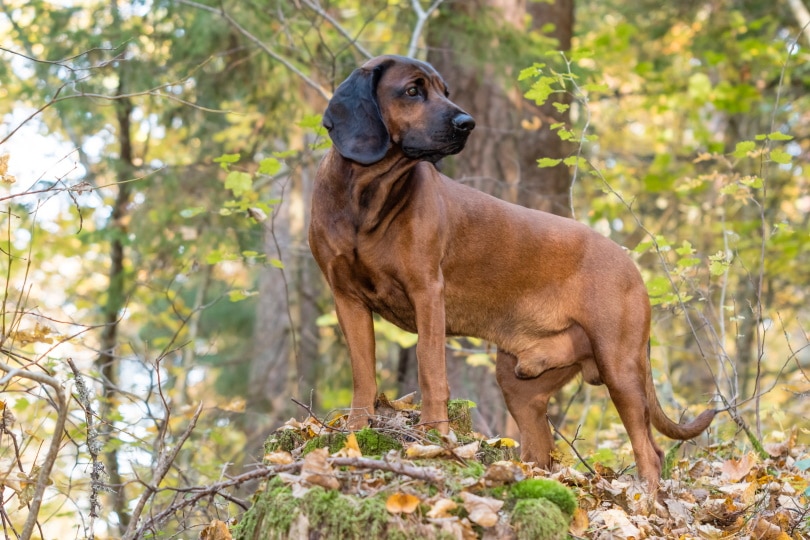 The Bavarian Mountain Hound is a scent hound that originated in Germany. It has been used since the early 20th century to track game in woodland. Originally, they were a cross between a Bavarian hound and a Hanover hound. However, they have developed into their own breed today.

This breed is extremely good at tracking. They are well-known for their cold-nose tracking ability, which allows them to tell injured animals apart from animals of the same species. They are small and active, devoted to their owners. However, they are a bit aloof with strangers.

As people-oriented dogs, they need to be with their humans often. They are not canines that you can leave outside for much of the time. They do require a bit of care. For instance, they require quite a bit of space and a decent amount of exercise. Their coats also need a bit of brushing.

They are usually only owned by hunters, foresters, and game wardens. However, they are sometimes owned as companion dogs.

1. They are some of the best trackers in the world.

While they may not be the most well-known tracking dogs, they are extremely good at it. They can tell the differences between injured animals and healthy animals of the same species.

2. They are quite similar to other hounds.

These canines are hounds and act very similarly to other hounds. If you’ve been around other hounds, then you know what the Bavarian Mountain Hound acts like.

3. The Bavarian Mount Hound is a newer breed.

While this dog may look ancient, it is actually newer. It started originally as a crossbreed in the 19th century. It was the result of crossing a hunting dog from the alps alongside a hunting dog from Germany. The result was a scent hound that is extremely good at tracking in tougher environments.

This canine is similar to all other hounds. They are calm and laidback. They typically aren’t super noisy, but they can have a loud bark when they do feel the need to use it. They can be very attached to their owners and affectionate. They’re people-pleasing dogs in their heart.

They are extremely good hunters. They are single-minded in their pursuit and often don’t require much training. They’re persistent and fast, able to tackle rugged terrain. Their superb nose makes them great hunters, which is often why they are often used as hunting dogs. They are rarely kept as companion dogs, though they do make good family dogs in some situations.

These dogs can be a bit stubborn, like most hounds. They aren’t particularly good at following commands, which can make them a bit difficult to train. They are simply much more interested in following their nose than listening to their owners. These dogs require a very patient trainer for this reason.

Because they are scent hounds, they should not be left off-leash unless they are in a fenced-in area. They will find a trail and follow it for miles. Recalls are not dependable with this breed, as they have “nose blindness.”

Yes. They typically get along well with children and bond very closely with their owners. They’re laidback and calm, which makes them good for families that aren’t super active. However, they do need to be socialized with children. They aren’t particularly gentle with kids or willing to put up with much rambunctious play. However, they are extremely good dogs for older children and those that are taught to be gentle.

Families need to have enough time for these dogs as well. They require quite a bit of exercise and overall care. Many will ask for attention from their family, though they typically aren’t very fond of strangers.

Yes. This hound is accepting of most other dogs. Early socialization is important. However, they are pack dogs and quite friendly around other canines.

Cats and smaller pets are a different story. These dogs have a high prey drive. For this reason, they have a tendency to chase smaller animals. They usually do not kill them. However, they will chase and can potentially harm them. They shouldn’t be left alone with small animals for this reason. Socialization does not help with this, as it is an innate instinct.

Things to Know When Owning a Bavarian Mountain Hound:

This canine does best on high-quality dog food. High protein and plenty of meat are important for the dog’s overall wellbeing. Look for foods that are free from fillers, including high amounts of grains and veggies. While veggies are healthy for many dogs, they should not be fed in high amounts.

These dogs can be prone to obesity if they are not exercised and properly fed. They are extremely food-driven, so they tend to overeat if left to their own devices. For this reason, you need to carefully control how much they eat. They are not dogs that you can free-feed. Strict portion sizes are required.

These dogs need water available at all times.

These dogs need quite a bit of space and exercise. They are hunting dogs, so much of their needs revolve around getting out in the woods and hunting. This means they have quite a lot of endurance. These dogs need an abundance of physical and mental stimulation for this reason. They can be suitable in family homes as long as these needs are met.

This often means taking them on long walks and letting them sniff around as much as possible. Space for these dogs to run is also important. You should provide them with plenty of playtimes. Try and pair physical exercise with mental exercise, such as hide-and-seek games or obedience training.

These dogs are quite intelligent, so they typically pick up on commands quite easily. They tend to love obedience training, as they need quite a bit of mental exercise. We recommend regularly training these dogs, preferably for a few minutes each day.

However, even with regular medication, these dogs are not necessarily going to listen to every command. They tend to have selective hearing. If they’re on a trail or see a small animal, they won’t be able to concentrate on the commands given. For this reason, we don’t recommend letting them off-leash in any circumstance – unless they’re in a fenced-in area with a secure fence.

These dogs are quite as trainable as others due to their independence.

While these canines have shorter coats, they typically need regular grooming. Their coat is dense and close-fitting. It is harsh and sheds a lot. For this reason, they require weekly brushing at the very least. During some circumstances, some dogs may need to be brushed more, especially during seasonal changes.

Their nails are particularly fast-growing and tough. You will need to cut their nails more often than other breeds. Nail clippers and grinders are both suitable options. You can cut them yourself or take them to a groomer to do so.

Their ears tend to trap debris and wax, which can eventually cause infection. You should check their ears regularly, preferably with every brushing session. If they are dirty, use a wet cotton ball to gently clean the ears. Any sign of infection should be brought up to a doctor.

You will need to brush your teeth regularly as well. Dental disease is quite common in dogs. Teeth brushing is the easiest and most cost-effective way to prevent this.

Because these dogs were mostly bred for practical purposes, they tend to be quite healthy. These dogs have fewer health problems than most canines.

Hip and elbow dysplasia are becoming more prevalent as the breed’s population grows. Proper nutrition when the dogs are puppies is important for preventing joint problems. Too many calories can make the dogs grow faster than their bones are prepared for, which can cause problems later on.

Otitis externa is the most significant and common problem. This medical term simply means that they have a predisposition to ear infections. This is largely because their ear canals don’t get aerated due to the floppiness of their ears. You should carefully clean out the dog’s ears whenever they become dirty. Some dogs are particularly prone to ear infections and may need a special ear wash to prevent infections.

There is no significant difference between males and females in this breed. They’re about the same size and have the same temperament.

The Bavarian Mountain Hound is a rarer breed that is mostly used for hunting purposes. Its extremely strong nose allows it to tell the difference between an injured animal and a healthy one, which can be particularly helpful for hunting situations. They have high endurance and intelligence. This is extremely useful in the field. However, these dogs require a lot of mental and physical stimulation to remain happy, which can be difficult in a family setting.

If you have the time and energy for these dogs, they can be great family pets.