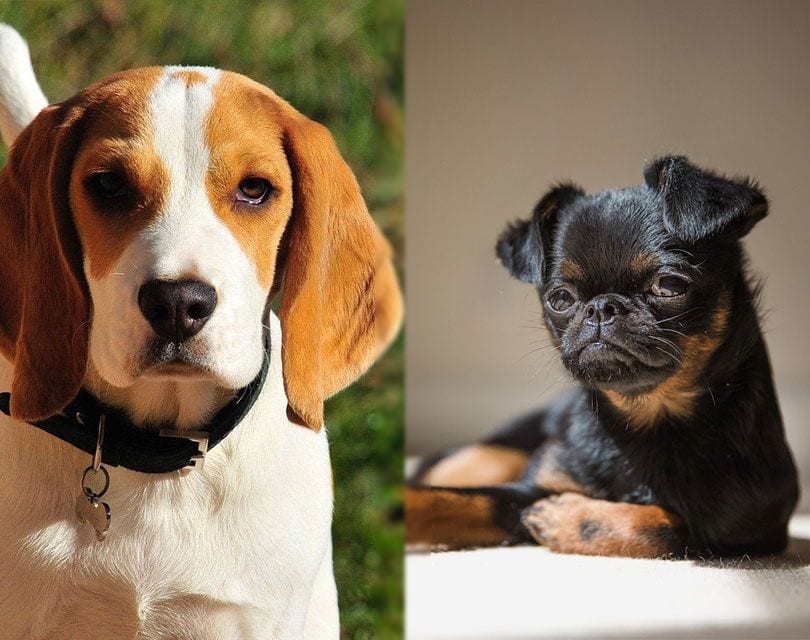 The Bea Griffon is a mixed dog, the result of breeding a Beagle with a Brussels Griffon. He is also known as the Beagle/Brussels Griffon Mix. He has a life span of 12 to 15 years and has talents in tricks, watchdog and agility. He is a small to medium cross who is both spirited and affectionate.

Where does the Bea Griffon come from?

The Bea Griffon is a designer dog, these are deliberately bred mixed dogs and they have seen a surge in popularity over the last 25 years. Most of these dogs are bred using two purebreds and a lot have a name that blends those parents names together. As well as being popular amongst the public celebrities too see to be drawn to them which is perhaps part of why the trend is so strong. While there are some breeders doing this with care there are also a lot who are just in it for profit. Avoid the puppy mills and bad breeders as there are a lot of them that are taking advantage of the trend. Here is a look at the Bea Griffon’s parents to get a feel for what goes into them.

The Beagle history is a little uncertain in some places as while we have reports of beagle like dogs from as far back as Roman times they were not the Beagles we know today. Used for hunting for a time they fell out of favor in the 18th century when foxhounds became popular and because Beagles were not that fast. However farmers continued to use them and that is what saved the breed. In the 1800s they were imported to America and there they were bred to be smaller.

Today he is an intelligent and lively dog with an expressive almost human like face. They can be sensitive and high strung, but can make wonderful companions and tend to bond more closely with one person in a family

The Bea Griffon is a loving and affectionate dog who wants to be with people all the time and will demand a lot of attention from you. He is intelligent usually with a great character and could be a good family pet or companion. He is energetic and playful and enjoys being social. He tends to be well-behaved and has a great enthusiasm for life. He bonds closely with his owner but is also caring for the rest of the family. He is very loyal and very friendly.

He is a small to medium sized dog weighing 12 to 24 pounds and standing 8 to 15 inches tall. He has floppy ears, a straight coat that can be coarse or smooth and is short. His muzzle is medium to long, a dark nose and dark eyes that are almond shaped. Common coat colors are orange, black, white, red, black, tan, golden, cream and tri-color.

How active does the Bea Griffon need to be?

The Bea Griffon needs a moderate amount of exercise each day to stay happy and fit. He can adapt to apartment living due to his size and ability to get some of his needs from his indoor play. He enjoys chewing and jumping, playing fetch and other such dog games. Take him out every day for a couple of walks and treat to him to visits to the dog park too. Access to a yard is not a requirement but if there is one that is a bonus place for him to play. Be prepared that he can jump quite high though and he tends to chase smaller animals.

He varies when it comes to training. Some owners find he is responsive and learns quickly and some find him more difficult. He may not be the best dog for a first time owner for that reason. Be firm and consistent but still keep it positive. Offer rewards and treats and praise to motivate him and if necessary keep training sessions shorter and engaging. Be patient, getting cross and scolding him is not going to be effective. Early training and socialization are important responsibilities a dog owner must take care of. If it is not going well there are professional schools or trainers you can pay for help.

Living with a Bea Griffon

Since the Brussels Griffon can be hypoallergenic so can the Bea Griffon but if that is a primary concern when looking at dogs you should visit the puppy before buying with person with allergies to check on any reactions. Depending on his coat he could be low to moderate shedding and so his brushing could be daily or every other day. Give him a bath as he needs it, too often or using the wrong kind of shampoo could dry out his skin. His ears will need checking for infection and wiping clean once a week. Smooth coated Bea Griffins will also have a seasonal shed to deal with. The rough coated ones do not but they will need regular trips to a groomer for clipping or stripping. He may also need his legs and beard trimmed regularly. Brush his teeth two to three times a week and have his nails clipped when they get too long.

He gets on very well with other dogs and can tolerate other pets though he sometimes will want to chase small animals. With children he is less natural, he will need early socialization and training and he is better if raised with them, or when they are older children who can be taught how to touch him and when to back off.

The Bea Griffon will bark occasionally and may have the Beagle howl. He should be fed ¾ to 1½ cups of good quality dry dog food a day, split into at least two meals. As he is so friendly he does not always make the most reliable watchdog .

There are health issues the Bea Griffon could inherit from his parents such as Intervertebral disk disease, eye problems, epilepsy, Hypothyroidism, Beagle Dwarfism, CBS, Patellar Luxation, Hip dysplasia, ear infections and skin allergies. The best way to lessen having any of these problems is to ask the breeder to show you health clearances for both parents. Another way to ensure you have a healthier puppy is to visit it and see the conditions it was bred and kept in.

This dog can cost anything right now, there are not enough on sale to gather a range of prices for. Other costs for things like a crate, carrier, collar and leash, deworming, shots, chipping, blood tests and neutering come to between $455 to $500. Annual costs for medical basics like check ups, vaccinations, pet insurance and flea prevention come to between $460 to $560. Annual costs for non-medical needs like food, treats, training, license, toys and grooming come between $655 to $755.

Looking for a Bea Griffon Puppy Name? Let select one from our list!

The Bea Griffon can be spirited but he is also very loving and affectionate and can be a great companion. He is not perhaps the best suited dog for families with children but with socialization he can adapt.