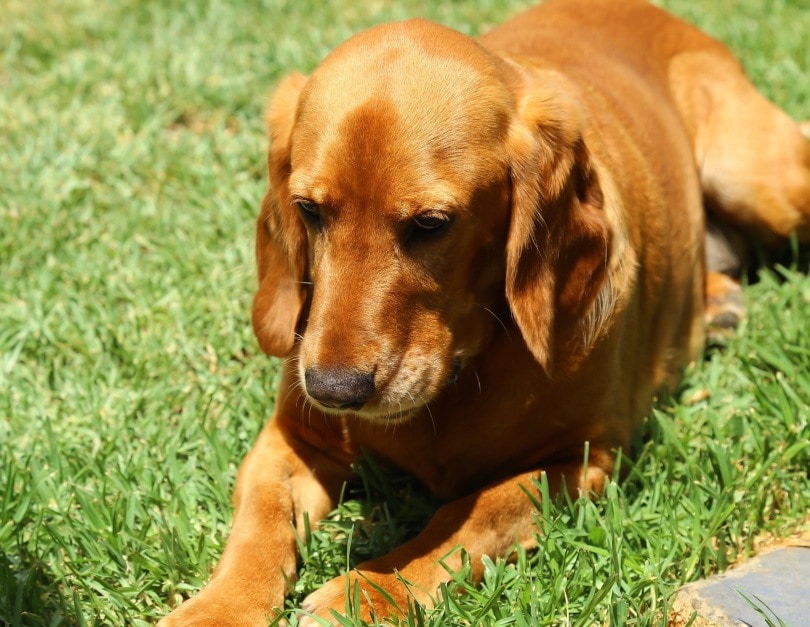 The Beaker, often called the Bocker, or Bocker Spaniel, is a cross between two purebreds-the Beagle and the Cocker Spaniel.

Being a hybrid, the Beaker typically possesses the looks of one parent breed and the temperaments of the other. However, one sure thing is that this dog is a loveable breed, intelligent, amicable, and loyal, just like its parents.

It may have a history and talent in tracking and watchdog, but more commonly makes a wonderful family pet these days. You can attribute its new role to its eagerness to please and dote on the family members.

One thing about the Beaker is that it is perceptive, although it can be stubborn at times. Plus, it can inherit the Spaniel heritage snappiness.

However, it might be just what every first-time owner needs. It is energetic but equally obedient, and it is as happy playing as it is snuggling tight on the couch at night.

Count on the Beaker for your safety because it is protective of the people it loves. It will always alarm you in case of intruders or signs of trouble – the reason it’s valued in most homes.

You’ll want it too because this dog is a complete package. Read on to confirm that.

What’s the Price of Beaker Puppies?

Although the Beaker has two popular parent breeds, it is relatively new and unknown. For this reason, you can find a Beaker puppy going for as little as $400 and $600 if you get it from a breeder with a reputable brand name.

Set aside an additional $455-$500 for things like a leash, collar, crate, neutering, deworming, carrier, and blood tests.

Your breeder should be thorough, with proper certifications. Ask to meet the parent breeds and any litter sibling if possible. This is because it’ll help shed some light on your pup’s temperaments and physical appearance when it’s older.

It cannot beat a Husky at this behavior, but beakers are also renowned barkers and howlers. They may get this trait from their Beagle heritage, as the name Beagle is French, meaning “open throat” because they tend to howl.

Howling is expected among hunting dogs as they do so to alert their handlers of potential prey. However, they may still howl even with no mark at the sight because they just enjoy it.

Some owners don’t consider howling an issue, but it can annoy neighbors, especially if it stays alone during the daytime when you are at work.

The good thing is that you can help control it. Perhaps, offer routine, puzzle toys, plenty of physical and mental exercise.

Or, you can leave a radio on to absorb the background noise when you are away.

Perhaps, the one thing you’ll notice about your Bocker is that this breed loves to sleep.

Beakers love routine and activity, but they may strongly resist exercise, playtime, or training-any activity that interferes with or disrupts their sleep time.

These dogs always make it clear from early on when they want to sleep.

3. Beakers are Considered Easy to Train

These dogs are intelligent and would do anything to please their owners. They are also friendly, a cocktail that makes them highly trainable.

Plus, beakers are just easy to train overall, so owners should always look forward to molding their pup into one that befits their lifestyle.

Temperament & Intelligence of the Beaker

The Bocker Spaniel is a mixed breed with the potential to inherit a wide range of temperaments. However, this dog generally tends to well-behaved, is loving, intelligent, with a desire for agility play.

While Beakers are generally friendly, there’s always a chance that they might develop the infamous Cocker Spaniel’s rage. However, this trait can “hide” during its puppy years, so you may notice it until the dog becomes of age.

Beakers are highly energetic, which means you need to provide them some form of activity throughout the day. And if you have a yard or can give it daily walks in the neighborhood, the better!

Both its parent breeds hate being left alone for long hours, so do Beakers. The good thing is that it’s possible to desensitize them from getting overly needy.

Beakers come from a lineage of excellent family pets. For this reason, they get along with everyone regardless of age and can tolerate strange faces at the first meeting.

Any family unit or individual can have a Bocker, especially active seniors and playful older kids. You may want to monitor it during its playtime with small kids, though.

Beakers are relatively small in stature, making them easy for little kids to grab and pull up. Unfortunately, this trait can lead to injury and frustration, which may prompt it to become aggressive.

Generally, this happy little dog enjoys curling up with its owner.

This dog isn’t picky on who to befriend, so be sure that it’ll get along pretty well with other dogs and cats.

However, it has a hunting strain in its bloodline, which means that they can be little bullies instinctively. Therefore, it would be best to introduce the pup to other household pets early and allow them to grow up beside one another.

One thing you should never forget is the dog’s natural high prey drive. So, just because your pup gets along with your family cat does not mean it will similarly accept other cats outside your home.

Things to Know When Owning a Beaker:

Bocker Spaniels are hybrids, so you can never be sure about their physical appearance and dispositions until they get a little older. However, you should be able to recognize whether your pup will have a Spaniel’s long curly hair or a Beagle’s short coat.

Generally, beakers are medium-sized, weighing around 20-30 pounds. You can find them in various colors, including white, black, and brown.

These dogs have adorable floppy ears, a broad head, a long but muscular body, small brown eyes, and a little curvy tail.

Here are other things you need to know about these pups:

A Beaker’s ideal diet is the one that’s formulated for small dogs with unmatched energy levels.

And, since it’s prone to obesity, overfeeding can make it pack on pounds, so you can consider sticking to a daily feeding plan.

You can provide your pup with good quality feeds and divide them into two or three meals a day at a set time. Don’t leave the food on the floor because your pup will eat it and keep coming back for more.

With a quality feed, you can provide it less at a time, and it’ll still receive all the nutritional value it needs.

The Beaker might be petite, but it still requires the same amount of exercise its Beagle parent gets. So, you’ll have to exhaust its pent-up energy through regular walks for about an hour or more.

It’s also an intelligent breed, which means that it craves physical and mental stimulation. So if you don’t provide it, it might get destructive and pick up on activities like chewing your shoes and grabbing items you’d rather it doesn’t.

Access to a yard isn’t a must-have for a Beaker as long as you offer it other exercise opportunities. However, it would be a bonus for it to run around and play more often.

Bockers are intelligent dogs, thanks to their bloodline. This means that it takes commands and instructions much more quickly than other dogs.

Intelligence can sometimes get in the way of training, so you may need to set yourself clearly as a pack leader while still using a positive approach.

This breed tends to snap, get aggressive, and jump too much, a trait you may want to curb with proper training on socialization. But, on the other hand, it’ll allow the dog to interact with strangers, children, and other pets better.

The good thing is that Beakers are eager to please. So, whenever it gets a command right, you can reward it with treats and praises to motivate it more.

Beakers are moderate shedders, which means that you may have to clean some hair. In addition, your pup will need a brush now and then to help with loose hair.

The fact that it sheds makes it not a good option for anyone with allergies. However, it does so moderately, so you may keep it if you want a dog that won’t need professional grooming unless you want to.

It’s equally important to ensure its dental hygiene, so brush your pup’s teeth at least three times a week. Also, check its ears and wipe away build-up or gunk with a damp cloth to prevent ear infection.

The Beaker is relatively new. There are no known conditions prevalent in this breed. It’s generally healthy and hardy and usually lives up to 10 years, with many going on to 14 years and more.

Beakers can also be epileptic and suffer from heart defects.

Bitches tend to be slightly smaller than males, although there’s little known difference in a female or male Beaker’s physical or mental attributes.

Generally, they are hybrids, so their traits are more likely to be directed by the dominant parent gene rather than the dog’s gender.

The Beaker breed is a happy, outgoing, small canine that makes an excellent companion for any home. But its bloodline is made up of hunters, so your dog requires regular exercise.

And while Beakers can live in an apartment, they are howlers and barkers, something that can offend your neighborhood. You can contain the behavior using radio, enough stimulation, and your presence, though.

A beaker dog breed would love nothing more than human contact and spending time with you.