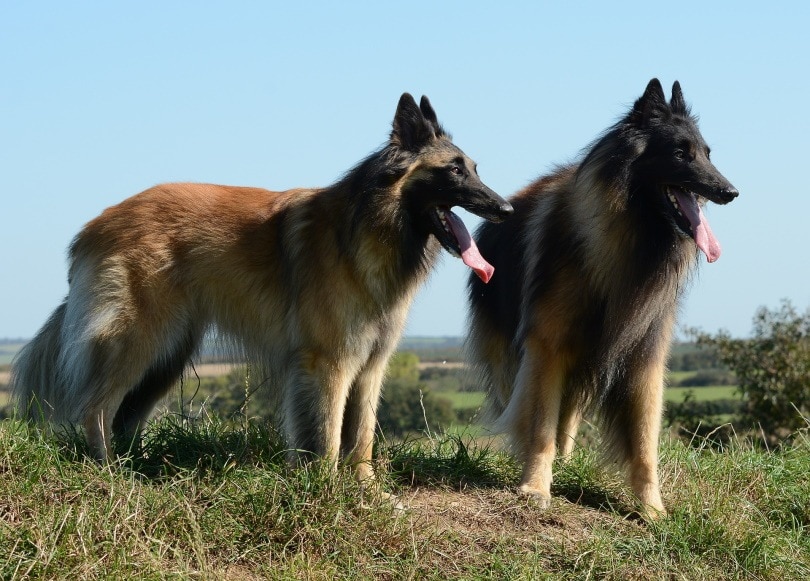 Belgium is a small country that is located in Western Europe. It shares a border with the countries of France, Germany, Luxembourg, and the Netherlands. Today, Belgium is mostly known as a diamond center, producing about 90% of the world’s raw diamond negotiations in Antwerp.

On top of their known diamond industry, Belgium is known for quite a few dog breeds as well. Their breeds range from small to large, meaning that you can easily find a Belgian dog to fit your preferences, lifestyle, and home.

In this article, we are going to look at the nine dog breeds that come out of Belgium. Four of these nine breeds classify as Belgian Shepherds, meaning that there are four different Belgian Shepherd varieties. Beyond that, there are also small Belgian dogs to consider.

Let’s check them out!

The Belgian Shepherd Groenendael is a medium sized dog that is incredibly well built and muscular. It has long neck fur and a double-layered coat. The coat is also black, glossy, and thicker around the chest area, forming a collar.

This sort of dog is built for many seasons, making it perfect for outside play. It tends to get along really well with humans, dogs, and other pets when socialized early. Because it can be a bit reserved, the breed does need a little bit of training and exercise, but it is perfect for many households.

The Belgian Shepherd Laekenois is also a medium-sized body with strong muscles and an elegant look. The coat is different on this Shepherd dog. It is much more short, rough, and bristly. Plus, the hair is primarily yellow-copper with black areas around the nose and tail.

In terms of personality, the Belgian Shepherd Laekenois is very similar to the Groenendael. It loves to play outside, and it tends to get along well with animals and people. They are also pretty easy to train and love playing outside.

Much like the other two Belgian Shepherds, the Belgian Shepherd Malinois is medium-sized, strong, and elegant. What sets it apart in terms of appearance is its coat. The coat is primarily short, but it is a little bit longer along the collar. The color is reddish-yellow, but it has some black around the muzzle too.

The Belgian Shepherd Malinois is just as easy to train as the other two varieties. It loves playing and loves to be around other people, animals, and dogs. This is a great breed for active people who like walking or running outside.

Finally, the last Belgian Shepherd type is the Belgian Shepherd Tervuren. In most respects, this Belgian Shepherd is similar to the other three varieties in that it is medium sized and elegant. Its coat is short on the head but long along the rest of the body, especially around the neck. The coloration can vary from copper-red to mahogany, and it has a black head and black hair tips.

Just like all the other Belgian Shepherds, this one is incredibly active, intelligent, and gentle. They tend to get along well with other people and children, but they can be aggressive if not socialized from an early age. Luckily, they are very easy to train.

Being an old breed that descends from Tibetan Mollos, the Bloodhound is a large and strong dog. It is known for its thin skin that droops along its forehead, cheeks, and neck. It also has distinct eyes, which are deep set and dark. The coat is rough and short, and it can come in many colors, such as black, fawn, fawn and red, and pure red.

The Bloodhound is known for being an intelligent, active, friendly, and persistent dog. Because it was bred to track prey, it is known to find scent trails and stick to them, making the breed independent and stubborn. At the same time, they are gentle, including around people, children, dogs, and other animals.

Because these dogs are so stubborn, they can be a bit difficult to train. It’s important to teach this dog from an early age, or else it will have a mind of its own. Bloodhounds make great companion dogs, but they are especially great for people who want a hunting dog too.

Unlike the other five dogs which are really small, the Brussels Griffon is super small, and it is the national dog of Belgium. Their bodies are short and strong, paired with a large and round skull. The eyes are prominent and set apart, and it comes in three different coat types, including the Bruxelles Griffon, Belgian Griffon, and Barbacon Dwarf.

When it comes to their personality, they are really calm yet playful and restless. They tend to be affectionate and devoted to their master. They also get along well with children, other animals, and dogs. This is a great dog for apartment living or more moderate activity.

As its name implies, the Bouvier Des Flanders was developed in the Flanders area of the country. This large dog is strong and stocky. Because of its whiskers, its head appears much bigger than it actually is. The coat is double-layered and often comes with a lot of texture on the outside layer. It can come in multiple colors, including gray, fawn, salt and pepper, and black.

In comparison to many other breeds, the Bouvier Des Flanders is well balanced and brave. It tends to be protective and devoted to the owner and family, making it important to socialize this breed. If not socialized from an early age, it may be a bit suspicious around strangers and other animals, though it tends to get along well with children.

The Papillon is a small, graceful, and elegant breed. Despite its short stature, it has a long body and large ears. It comes in two different varieties, one with straight ears and one with drooping ears. Depending on the breed type, there is often fringes along the ears, tail, and chest.

Despite being so small, Papillons can be a bit naughty, though they are also intelligent, alert, and playful. If trained well, the dog will be obedient. It also tends to be a great dog to its master, children, and other animals, but it may be a bit reserved around strangers. This is a great dog for less active people and apartment living.

Finally, the last dog on our list is the Schipperke. This dog is medium sized and almost looks like a Wolf but smaller. Its body is much bigger in the front than the back, and its fur is much longer on the hind legs and neck. The color is almost always pure black.

The Schipperke is more like a wolf than just in its appearance. It also is really daring and curious by nature. This makes it a really great watchdog because it will definitely alert you when intruders are around. At the same time, these dogs are affectionate and loyal to their master, and they get along great with children.

It is important to train this dog from an early age because it can get into mischief if not socialized and trained. It’s also a great dog if you are looking for a watchdog or need to catch pests, such as rodents, rabbits, or moles.

As you can see, Belgium put out a lot of very unique dogs. Though most of their dogs are large, there are a couple small ones too. The great part about Belgian dogs is that they come in so many varieties that just about any household can find some Belgian breed to fit in their home.