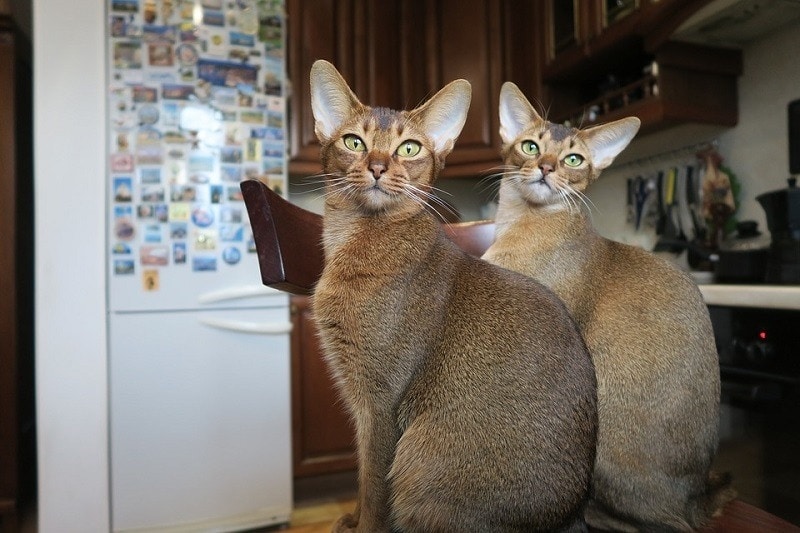 A cat is a great addition to any family. They can bring love, character, and fun to a house. But if you have kids, you have to consider the welfare of the cat and the safety and enjoyment of the child.

Kids tend to poke, pull, and shove cats and small animals around. While your feline family member may have the capability to get out of the way and up high, they can still be caught off guard.

Therefore, you should look for a cat breed that is not only loving and loyal but also tough and hardy. They should offer cuddles and not get angry or aggressive if your toddler accidentally grabs a clump of fur. Here are 15 breeds of cats that are suitable for families and meet these requirements.

The Abyssinian is the perfect choice for families and has something for everybody in the house. They are bright, intelligent, and quick enough to get out of the way of toddlers but are loving and affectionate enough for adults and older children. The breed will also live with other cats and can live in a house with well-behaved and well-mannered dogs.

The Bengal is active and lively. If you do have children, you should ensure that you check with the breeder how many generations away the cat is from their wild leopard cat hybrid relatives. Ideally, you should ensure that your domestic cat is at least four generations away from this wild stage. They like to climb, love to walk, and can often be taught to fetch and play games, even with young children.

The Birman is considered a somewhat magical breed, and every country’s Birmans are a little different, but in general, you can expect an even-tempered cat that will not get angry or aggressive. They are tolerant of grabby toddlers, get along with other pets in the house, and will enjoy spending time with humans.

The Exotic Shorthair is a cross between the American Shorthair and the Persian. They have the same features as a Persian but a denser coat. They need much less grooming than a Persian requires, and they are considered easygoing and friendly cats. Although they might chatter a bit, they have quiet and soft voices.

The British Shorthair is mild-mannered, even a bit quiet and subdued. They will become loyal and loving family members, though, and are known for being sweet and affectionate without being cloying and overly clingy. They are rugged and hardy, tend to stay clear of most illnesses, and make a great addition to the family home.

The Manx cat is known around the world for having no tail. The breed can actually have no tail, half a tail, or even a full tail. They originate from the Isle of Man and are friendly and gentle while also being playful, which makes them a great choice for the family home. They do like to talk, and although they usually form a closer bond with one human, they will love all family members.

The Burmese is widely considered to be the ultimate in companion cats. They are affectionate, sometimes described as being the most affectionate breed. They may be referred to as Velcro cats because they will stay as close as possible to their owner, so if you aren’t prepared to have a little shadow follow you around the house all day or if you are out of the house for long periods, this may not be the right breed for you.

The Cornish Rex is most widely recognized for their curly hair, which is indicative of the Rex mutation. They will follow you around, primarily because they always want to play. They are inquisitive and highly energetic and athletic cats that are more than capable of climbing, running, and performing for you.

The Devon Rex is similar to the Cornish Rex. They come from the county next door and have the same Rex gene. The two breeds also share the same energy levels. The Devon Rex is good with children and will get along with cat-friendly dogs.

The Himalayan is a cross between a Persian and a Siamese. They have long hair and a flat face from the Persian and the coloring of the Siamese. They are good companion cats and tend to be sociable, and they will befriend visitors and family members. Quite lively, the Himalayan does enjoy a game, and they can be taught to play fetch with a ball or other small object.

The Scottish Fold has an adorable look due to the backward ears that give the breed their name. They are good with kids and with well-behaved dogs. The Fold loves attention, so they will get along well with children who are prepared to give them respectful attention. The Fold is another breed that is capable of learning tricks, probably because they enjoy playing and spending time with their humans.

The Siamese is a well-known cat breed and is an ideal choice for families with children and dogs. They are highly inquisitive, watching whatever is going on around them. They are playful, enjoy company, and quickly grow to love their family. They are vocal cats, so be prepared to enter into a lengthy discussion on most topics.

The Siberian is a hardy cat. Not only can they live in sub-zero temperatures, thanks partially to their long and thick coat, but they are tough and will enjoy playing with children. The Siberian coat does require a great deal of attention, though, and it does shed heavily, so you will need to be prepared for this when you take them home.

The Ragamuffin is a descendant of the Ragdoll and exhibits many of the same traits. They are friendly and will relax into your arms for cuddles. They are friendly, and they will become attached to all family members, including kids, which makes them a great choice as a family cat.

The Ragdoll is the original breed that gave rise to the Ragamuffin. Not only do they relax into your arms, but they have also been known to physically throw themselves down for serious attention from their favorite human. The Ragdoll has an innate sense that they shouldn’t use their claws while playing, which is ideal for children, and some will even let children dress them up and walk them in prams.

These are 15 of the best cat breeds for families. These cats enjoy human attention and give love and cuddles but are even-tempered and mild-mannered enough that they won’t strike or attack children, even if they are being a little rough and grabbing at fur.