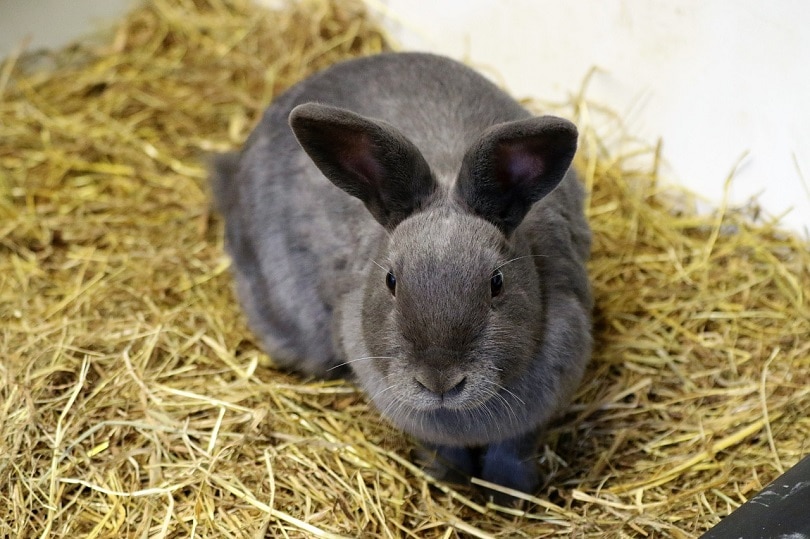 Did you know that grass and hay should make up three-quarters of a rabbit’s diet?

In the wild, rabbits eat anything they can get their paws on, from grass and wildflowers in the summer to twigs and evergreen needles in the winter. They’re infamous for invading vegetable gardens to chow down on leafy greens.

Domesticated rabbits have different needs — they aren’t running for their lives most of the time, for starters — but they’re not that distant from their wild cousins. They need a constant supply of fiber to maintain a healthy weight, strong teeth, and good digestion.

Those little brown pellets you might be feeding them are mostly grain. There’s some nutrition in there, but your rabbit will miss out on a lot of the other benefits of eating grass.

Don’t worry, though: if you’ve been neglecting to feed your fuzzball enough hay, it’s not too late to introduce this critical staple into their diet. But there’s a lot of hay on the market, and not all of it is good. We’ve put together reviews of the best hay for rabbits so you can do right by your furry friend.

A Quick Glance at our Favorite Choices in 2021

The 10 Best Hay for Rabbits

There are a lot of good brands of hay out there which have the perfect nutritional balance for your rabbit, and are nice-smelling and easy to serve out. The difference with Oxbow Western timothy hay is the attention they clearly paid to what the bunnies want, not just what they need.

We’re not rabbits, but it’s easy to tell that rabbits find Oxbow Western delicious, given how often they’ll eat it when they’re not interested in anything else. If you’re despairing about getting your rabbit onto a higher-fiber diet or getting their weight under control, this is the solution.

The only downside of Oxbow Western is that it’s very much, in their own words, a “product of nature.” The hay isn’t always going to be even, and there’s often a lot of dust among the tasty morsels in the bottom of the back.

However, all in all, this is still one of the best timothy hay products for rabbits in 2020.

High-fiber, low-protein timothy hay can be expensive, but not from Kaytee – it’s easily the best value hay for rabbits for the money, and it’s suitable for hamsters and guinea pigs too. Like all the best rabbit hay, Kaytee’s timothy hay has no other ingredients, and has an excellent leaf-to-stem ratio.

We also like that it’s American-grown (in the Pacific Northwest), for those who care about buying local. You’ll find it an easy, reliable way to get the proper amount of fiber into your furball’s diet, especially since a single bag can last one rabbit for months.

Like our #1 pick, Kaytee has some issues with dust. We’d prefer they not cut the stems too small to begin with, since it leads them to disintegrate under pressure in the bag. Also, according to our tests with real bunnies, they just don’t go for it as often as they do for Oxbow western, so we had to put Kaytee at #2.

Switching gears for a second, we’ve got a slightly more expensive product from Rabbit Hole, which is formulated for rabbits under seven months old. Since it’s made from alfalfa instead of timothy or grass hay, it’s got a higher protein and calcium content, with correspondingly less fiber. With longer strands, it also helps your bunny practice chewing correctly.

Extra protein and calcium promote healthy growth in young bunnies, but when they become adults, their dietary needs change to require more fiber. As such, this isn’t a product you’ll want to be feeding your pal for their whole life, so we decided it shouldn’t top the list.

Another product from Oxbow, our #1 winner, this orchard grass hay is a bit different from their timothy hay that’s such a hit with bunnies. With its sweet scent, long strands, and high fiber content, it makes an ideal mixture with other types of hay. A freely available, well-mixed selection of different hays will convince your rabbit to eat its fill, while honing its chewing skills.

In addition to its nutritional value, this hay rarely comes out dusty, but we’ve still marked it down because Oxbow occasionally mixes in stems that are too firm for smaller animals to chew. There’s also sometimes timothy hay in the mix, which is a nasty surprise for people or rabbits who are allergic to it.

Kaytee’s wafer-cut timothy hay is the right hay for anybody willing to pay a bit more to ensure a food with less mess than long-strand hay. “Wafer-cut,” which is just a fancy name for shorter strands that come apart in sheets, is easier to serve and less prone to disintegrating in the bag. The wafer cut also means that the blades are softer on average.

Notice we say “on average,” because our big concern with Kaytee’s timothy hay is consistency. We’ve opened some bags to find soft green shoots, and others to find brown, crumbly hay with bits of straw and sometimes even pebbles. It’s still a great brand for the most part, but there’s more risk here than we like.

Vitakraft’s timothy hay is another reliable source of fiber and healthy teeth for your bun, preserved in neatly compressed bales. We like it for any rabbit that’s extremely picky about freshness and taste — we’ve seen some rabbits who usually only eat fresh wild greens eating Vitakraft up. The lack of any artificial additives helps.

Any problems? Well, it’s timothy hay, which humans and bunnies are frequently allergic to. It’s also cut extremely short, and the smaller pieces make it messier to serve and eat. With so many bits and so much dust, a lot of it just ends up on the floor.

ZuPreem’s timothy hay is definitely a bargain – this is one of the least expensive 14-ounce bags on the market, so it’s great for multi-rabbit households.

American-grown, sun-dried, and high in fiber, ZuPreem Nature’s Promise is delicious to small animals, and their owners will like the smell. We like that it’s made using the second cutting of hay, which is much more palatable to the little ones (the first cutting usually goes to horses).

The reason it’s marked so low is that, while this hay was definitely tasty when packaged, it has a nasty habit of coming out dry and dusty. What really bothers us is that the outside of the bag is often greener than what’s inside. We can’t stand false advertising.

This timothy hay from Higgins is sold in an unusual form: wrapped up in small individual bales. In theory, this preserves the freshness and moisture in each individual package.

In practice, it often means the hay gets too compressed. This dries it out, turns it yellow, and results in your bunnies tearing it up and spreading it around more than actually eating it.

Higgins Sunburst isn’t all bad. The servings are nicely proportioned, and the break-a-bale system does reduce mess outside the cage. Moreover, it’s proved itself able to entice picky eaters – and your pets really will have a great time breaking it apart.

Standlee’s orchard grass hay advertises itself as a hand-selected meal that’s close to what a rabbit would forage for itself in the wild. While we tend to think of “hand-selected” as a marketing gimmick, and while pet rabbits and wild rabbits have different diet needs, we can’t deny that Standlee orchard grass does a good job of maintaining its freshness long after you open the package.

The downside is that animals really don’t seem to like it. Whether it’s the smell or the texture, we’ve seen a lot of rabbits go out of their way to avoid this, even when it’s mixed with other types of hay. Like we said: nature isn’t always the right guideline.

Rounding off the list, we’ve got another alfalfa hay, which is a dietary staple much more suited to young, fast-growing rabbits. According to Living World, alfalfa hay encourages all your bunny’s natural instincts, including foraging, nibbling, and burrowing. Its high calcium and protein content helps your rabbit grow, but its lower fiber makes it less suitable for adults.

Compared to Rabbit Hole’s alfalfa hay at #3, this is almost unforgivably dusty, especially since it sells for about the same price. Rabbits get that, and often won’t even eat this as a treat. Some do like it, though, so if you’ve found your baby bun likes alfalfa, it’s at least worth a try.

At the top of this article, we told you that a rabbit’s diet should be 75% grass. But what kind of grass? And what should the other 25% be?

Grass is important to rabbits for so many reasons. Its fiber keeps their gastrointestinal systems in working order. Chewing on it helps them keep their teeth from growing too fast. For cage-dwelling rabbits, it even doubles as a toy, which they love chewing on and burrowing into.

However, as great as grass is, it can’t be the only thing your rabbit eats. A lot of hay is nutritionally unhelpful, since it passes through your bunny too quickly to digest. The rest of the fiber they need should come from pellets, vegetables, and fruits.

Take a look at our handy charts to find out what you should be feeding your rabbit at each age. The #1 rule to follow at all times is that once your rabbit is no longer nursing, it should have constant access to as much hay as it wants.

What different types of hay are there?

There’s a lot, and they all look pretty similar. The one rule to follow here: try all of them and see which ones your rabbit likes. Then take the ones it chooses, and serve a mixture of them all.

Here are your options:

Oxbow Western Timothy Hay blew the others out of the water in our tests for these reviews. It’s scrumptious for rabbits (and chinchillas and guinea pigs as well), who we often saw digging through a mixture of hays to get at their favorite timothy.

It’s also easy for humans to serve up, and had one of the lowest likelihoods of dust in the bag. All in all, a fresh treat that’s worth your money.

For a better value choice that stacks up in nearly every category, we also like Kaytee Natural Timothy Hay. In fact, it was so close that the choice went down to the bunnies, who liked Oxbow slightly more. Neither one is a bad option for any of your small pets.

We truly hope that these reviews have helped you find the best hay for your rabbit. Good luck in your search!