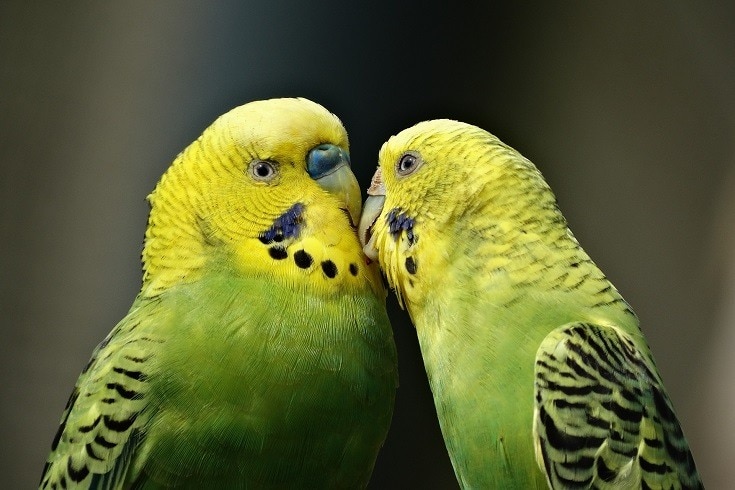 Birds have long been a popular companion to humans, notably large species of parrots, and an estimated 5 million birds are kept as pets in the United States alone. Before choosing a pet bird, it is vital to do research, as some species require a massive amount of attention and special care, and some are even likely to outlive their owners!

Smaller bird species, like budgies, doves, and canaries, are great options for beginners, as they are easy to care for and don’t require huge amounts of human attention and interaction. These birds are also easy to feed and house and typically don’t live as long as Macaws and other large parrots, some of which can live for well over 60 years.

Birds are highly intelligent creatures that need to have their physical and mental needs met. Large parrots especially are a significant responsibility that should not be entered into lightly. If you have the time and dedication and are ready to bring home a pet bird, here are 12 of the best bird species to keep as pets.

The African Grey is one of the most intelligent parrots on the planet, with an astounding ability to learn and imitate speech that has earned them the nickname, “The Einsteins of the Bird World.” There are two distinct subspecies of African Greys: the Congo, with a larger body and black beak, and the Timneh, with a smaller body, darker grey feathers, and maroon tail feathers. While these birds are a fairly high-maintenance species and can live for over 50 years, they bond strongly with their owners and are affectionate companions.

Amazon Parrots are one of the most popular medium-sized birds kept as pets due to their playful and outgoing natures. They are bold and comical birds that enjoy being the center of attention and are known for their talking and singing. While they adjust well to captivity, these birds require a great deal of attention and mental stimulation, without which they are prone to behavioral problems. Amazon Parrots typically live for 40-50 years and in some cases, beyond 80.

Also known as parakeets or simply as “budgies,” Budgerigars are intelligent little birds that are lower maintenance than bigger parrots and require less space, making them a popular choice for beginner bird enthusiasts. They can talk just as well or better than larger parrot species, and some have been known to develop fairly complex vocabularies. They come in a wide variety of beautiful colors and typically live for 12-14 years.

Canaries have been kept and bred for hundreds of years by bird enthusiasts and have been developed into over 200 different subspecies, each with their own unique character and appearance. They are well known for their detection of noxious gases in coal mines in the late 1800s, as well as for their depiction as the popular cartoon character “Tweety Bird.” They are great for beginners, as they are easy to for and have a friendly disposition and typically live for 5-15 years when well cared for.

The medium-sized Cockatiel is a member of the Cockatoo family and is often described by their owners as comical, outgoing, and cuddly — these birds enjoy snuggling into their owner’s shoulder, for example. They are known for their whistling and singing more than talking, as well as their impressive head crest, as they are the only small parrots to feature one. They come in a diverse range of beautiful colors and typically live for 15-20 years.

Cockatoos are great companion birds and are known for their affectionate, comical, and mischievous characters. These birds demand a great deal of attention and are commonly referred to as “Velcro birds” as they love being close to their owners. The cockatoo species is made up of around 21 different birds, most recognizable for their prominent crests and curved bills, and they can be noisy at times. While these parrots make great pets, they are one of the more challenging bird species to care for, and some varieties can live for up to 60 years.

Conures are comical and fun-loving birds and popular pet companions. They are small to medium-sized parrots that range widely in vivid coloring, similar to that of the larger Macaw. They are social birds that love to be close to their owners and are known for their gentleness and patience with children. They are also known for being attached to and friendly with the entire family and don’t get attached to one owner, as many other parrots do. There are almost 100 different subspecies of Conures, making them one of the most diverse parrot species. They have a lifespan of 20-30 years.

Perhaps a surprising addition to this list, Doves make great companion birds when raised and cared for properly. They are good-natured and friendly, easy to look after, and quieter than parrots. Doves are a great choice of bird for beginners for these reasons and will happily perch on your shoulder as parrots do. When raised properly, they are highly affectionate birds that enjoy human interaction, including petting and cuddling. The most popular pet doves are ringnecks, which have an average lifespan of 12-15 years.

The tiny Finch has become a popular pet bird species due to its quiet nature and hands-off maintenance. There are hundreds of different subspecies of Finches, the most popular pet varieties being the Zebra Finch, Owl Finch, and Society Finch. While Finches are easier to care for than parrots, as they don’t require human interaction, they do require a large aviary and are happiest when kept in pairs or groups. They are unlikely to be trained to perch on your shoulder, although some can be trained to with patience. Finches typically live for up to 10 years.

One of the smaller species of parrot commonly kept as pets, Lovebirds get their name from the loving bond that they form with their mates. There are 9 different subspecies of lovebirds, each with their own unique characteristics and coloring, but they are all active and loving parrots. Lovebirds are best kept in pairs, and there is a common myth that they will die of depression if kept alone. While this has been proved largely untrue, these birds should be given ample opportunity to live up to their name!

The Macaw is one of the most famous of all parrots and for good reason. They are incredibly beautiful, brightly colored birds with large beaks and long tails. While there are a few small subspecies, Macaws are typically large and extremely vocal birds that require a ton of attention and living space and are a massive responsibility. Macaws are playful and active birds that make popular pets. These birds can easily live for 50 years or more in captivity, so they will likely be a lifelong commitment.

Parrotlets are the smallest species of the parrot family that like their larger cousins, form strong bonds with their owners and are popular pets. Although they are small, Parrotlets can live for 20-30 years if properly cared for and have big personalities. They are known for their feisty and sometimes mischievous characters that demand a ton of attention. They are also highly active birds that love to explore their environment, so they should be let out of their enclosures as much as possible.