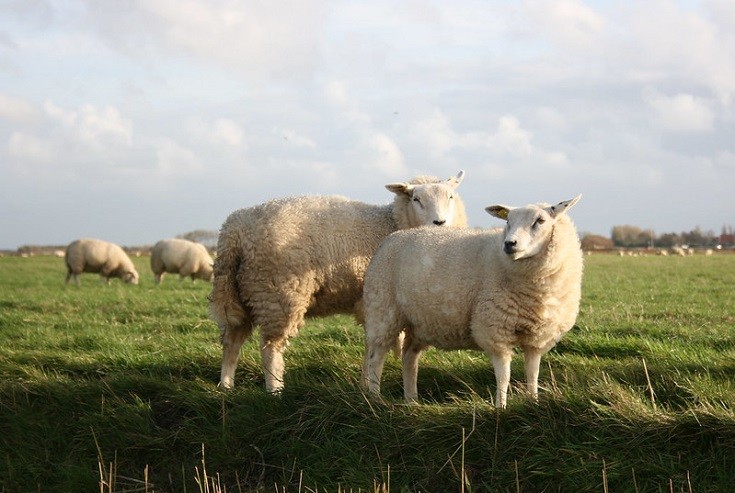 Sheep and humans have a long and storied history, one that dates back to about 10,000 years ago in Central Asia. When we first domesticated sheep, we did so with the intent of securing a steady source of meat and milk. This went on for millennia until we figured out how to make long, strong fibers out of wool. As a result, we started breeding sheep for different purposes.

Today, there are dozens of sheep breeds, with each serving unique purposes. So, which are the best ones for meat?

Sheep that are bred for meat production typically feature rapid weight gain, with some attaining half of their adult size when they are young as 4 months old. In addition to a fast growth rate, these breeds tend to reach sexual maturity faster, thus breeding more often.

In this article, we bring to you some of the best sheep breeds for meat to check out today.

This breed originates from Suffolk, thus its name. It came about after crossing Southdown rams with Norfolk Horned ewes. Appearance-wise, the Suffolk comes with a bare head with no horns, a black face, and bare black legs.

Their larger stature, however, is the reason they are considered one of the best breeds for meat. Suffolk ewes typically weigh between 180 and 250 pounds, while rams can attain weights of up to 350 pounds.

What’s more, the Suffolk’s meat is renowned for its superior quality. This is because it has a higher muscle and protein composition and a higher nutritional value than most meats. Additionally, Suffolk sheep have not only a rapid growth rate but also a long life expectancy since they routinely live up to 13 years. They are also a hardy breed, thriving in a wide range of conditions.

In addition to being great at meat production, the Suffolk also produces a decent amount of wool, making it a dual-purpose breed.

Native to South Africa, the Dorper breed is a cross between the Blackheaded Persian and the Dorset Horn. While this breed can come with either a black head or a white one, farmers often favor the black head trait. This is why most Dorpers feature black heads.

Dorpers are prolific breeders and are some of the most popular breeds for meat production. Unlike most breeds that only mate during fall, Dorpers can mate all year round.

As expected of a breed designed for meat production, the Dorper has a phenomenal growth rate, gaining between 80 and 90 grams per day. As a result, lambs can weigh nearly 90 pounds at only 4 months old.

Additionally, they are a hardy breed, which allows them to adapt easily to a wide range of climates.

As its name suggests, this breed originates from Hampshire in southern England and is one of the most popular sheep breeds for meat due to its large and muscular frame. The quality of the Hampshire’s mutton is also one of the best.

Hampshire sheep are typically white when it comes to appearance and have long dark faces and slightly drooping ears. Their legs tend to be dark too.

The Hampshire matures early and has a fast growth rate. Hampshire ewes typically weigh around 225 pounds, while the rams can tip the scales at over 350 pounds. These attributes are what make them excellent options for the sheepmeat industry.

Thanks to their early maturation, fast growth rate, and lean, large frames, Hampshires are often used to enhance other breeds. They are also quite hardy.

The Southdown is yet another sheep breed from Sussex. Developed during the early 19th century, this sheep is rather small, with ewes weighing between 135 and 180 pounds. The rams weigh a maximum of 240 pounds.

Despite their small stature, Southdowns are popular in the meat production industry due to the high-quality nature of their meat. Additionally, they reach sexual maturity earlier than most other breeds, which makes them prolific breeders.

The Southdown goats are also renowned for their hardiness. They are also efficient foragers. This means that they do not require a lot of maintenance. Nonetheless, providing them with supplements is important, as it improves the quality of their stock and meat.

This breed originates from Texel, which is an island off the Dutch North Sea coast. The Texel is renowned for its outstanding muscular development, which means that most of its carcass consists of lean meat. In the meat industry, the leaner the meat, the higher its quality.

These sheep also have a fast rate of growth, with some individuals gaining up to 250 grams per day. At only 3 months old, a Texel lamb can weigh nearly 60 pounds. Fully-grown ewes can weigh up to 190 pounds, while rams can weigh up to 300 pounds.

The Texel fleshes easily and does well on a diet of grass feeds. Nevertheless, providing them with a well-balanced and nutritious diet is essential for improving productivity.

Texels are hardy sheep, thriving in most climates. They are also great at milk production.

The Dorset is a cross between the Spanish Merino and the Wales Horned sheep. This breed is renowned for its lambing abilities. Unlike most breeds, Dorset ewes do not typically pause their estrus cycle during warmer months.

This means that they are capable of year-round lambing, thus allowing you to maximize your profits by producing numerous crops of lambs. Fully-grown Dorset ewes weigh between 150 and 200 pounds, while rams can weigh up to 275 pounds.

Developed in the United States by crossing the compact Cheviot with the large Columbia, the Montadale is a relatively recent breed. This sheep was developed by E. H. Mattingly in a bid to create a beautiful, productive sheep.

Montadales are renowned for their high-yield carcasses, as they are usually lean and muscular. Additionally, they have a rapid growth rate. When it comes to size, females typically weigh between 160 and 180 pounds, while males can weigh up to 275 pounds.

The Montadale is an excellent option for those looking for a multi-purpose breed, as they also produce plenty of milk and high-quality fleece.

The Shropshire is native to England, where it was developed by crossing various native breeds, such as the Leicester, Cotswold, and the Southdown.

This breed was introduced to the United States in 1855, where it became an instant hit. Shropshires are a medium-sized breed, with ewes weigh between 170 and 200 pounds while rams can weigh up to 290 pounds.

The reason for their popularity in the sheepmeat industry is the high-quality nature of their carcasses, as they are lean and well-muscled. Additionally, they are fast growers.

Shepherds also value this breed for its decent milk production, as well as medium-grade wool.

There you have it, the top 8 best sheep breeds for meat in the world today. While there are numerous other breeds that serve the same purpose, we found the above breeds to be among the best in terms of meat quality and productivity.