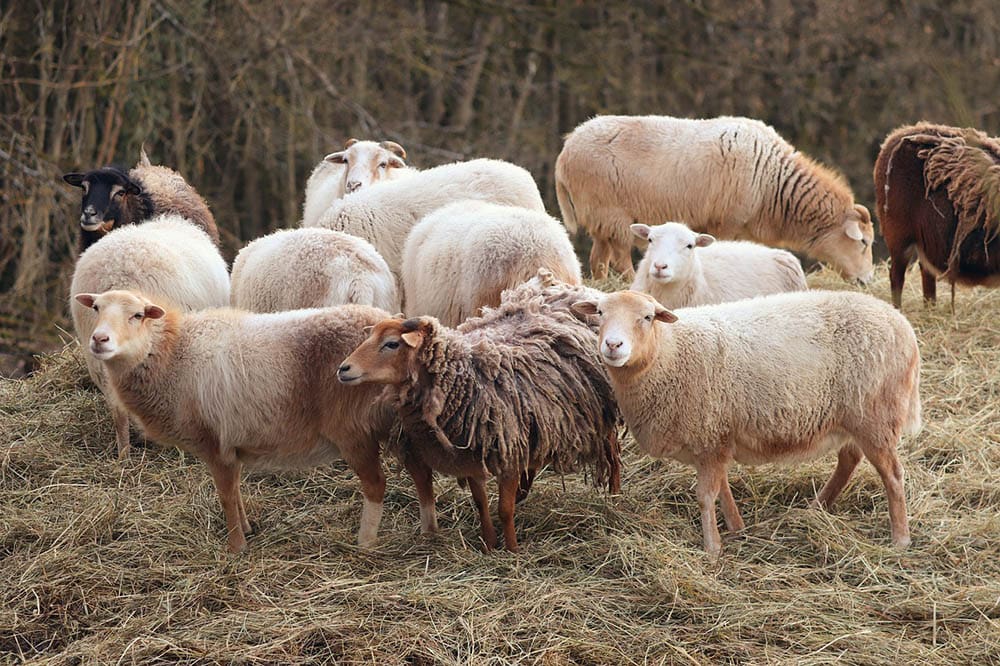 Humans have used wool for centuries, for everything from carpets and blankets to clothing and everything in-between. Therefore, sheep have been highly valuable animals for just as long. There are thought to be over 1,000 breeds of sheep — 60 in the U.S. alone — and most experts believe that there are more sheep breeds than any other livestock apart from poultry.

While all these breeds produce wool, not all produce the same type of wool, and some breeds produce fine, soft wools suited for clothing, while others produce hardier wool best for carpets or blankets. Also, some sheep produce far less wool than others, and these are better suited for wool production.

The Bond Sheep is an Australian sheep breed known for producing high-yielding wool that is typically the longest among fine wool production. They are a hybrid breed of Merinos and Lincolns, crossbred to adapt to the hot environment in the Riverina area of Australia. They are primarily used for wool production but are dual-purpose animals used for meat production too.

The Borderdale sheep was developed in New Zealand and is a cross between the Border Leicester and Corriedale. They are medium to large sheep that are used for both wool and meat production and are known for their good growth rate and low susceptibility to foot rot.

The Cormo sheep originated in Tasmania, Australia, in the 1960s and is a cross between a Merino and Corriedale. The wool from Cormos is high-yielding, with a high degree of fiber uniformity, and is mainly white and highly versatile. Cormos are medium-sized sheep that grow fast, and as such, they are used for their wool and in the meat industry.

A dual-purpose sheep used for wool and meat, the Corriedale is a hardy sheep that is highly adaptable to a variety of conditions and came from crossing a Lincoln Longwool and Merino. The breed originated in New Zealand in the late 1800s — one of the oldest crossbreeds — and is now a popular breed worldwide.

The Cotswald is a fairly rare breed, originating from the Cotswald hills in England. They are a dual-purpose breed used for both meat and wool, although their rarity makes them more suited for wool production. They are known for being calm and friendly sheep and are unique in that the rams do not have horns. Cotswald wool is exceedingly strong and grows quickly.

A cross between Delaine-Merinos and Rambouillet sheep, the Debouillet is a hardy and adaptable breed raised almost exclusively for wool production. They are medium to large-sized sheep that were originally developed in New Mexico in the early 1920s, with long, fine wool with a deep, close crimp that is highly valued by wool producers.

Herdwick sheep are raised primarily for meat production because their wool is coarse and difficult to dye, but there has recently been a resurgence in the use of their fleece. They originated in England and are known for being territorial animals that don’t stray far from their home. They are hardy sheep that can withstand cold temperatures and survive on little food, making them easy to care for.

Merinos originated in Spain, and their wool is known for being some of the softest, finest wool available, and it is thus one of the most valuable types of wool on the market. Merinos are also commonly used for meat production and are hardy and adaptable animals, making them one of the most popular, highly sought-after sheep breeds in the world.

An Australian breed that originated in the late 1800s, the Polwarth sheep is a large animal with 25% Lincoln and 75% Merino bloodlines, crossed to improve the hardiness of the Merino. They are commonly used for wool but occasionally for meat production too, and the breed has been exported all over the world since their development.

The large and robust Rambouillet is a breed that is commonly used for both meat and wool production and produces a fine, elastic wool that is one of the best for use in felting. The breed originated in France in the late 1700s and is known for their large, curved, decorative horns. They are strong, sturdy, adaptable animals that are well-suited to almost any climate and are found in many countries around the world.

The Romney is a “long wool” breed that originated in England in the early to mid-1800s and produces high yields of tough, versatile wool. The breed is also commonly used in meat production, and due to this and the versatility of their wool, they are found in almost every sheep-producing country in the world. The breed is also highly resistant to foot rot and is a prolific breeder, so it’s easy to see why they are one of the most popular breeds around.

The Shetland sheep originated in the Shetland Iles of Scotland and produces some of the finest wool of any European sheep breed. Shetlands are small and slow-growing in comparison to most other commercial breeds, but they are hardy, adaptable, and long-lived sheep and valuable due to their fine wool and use in meat production. These hardy sheep can survive in harsh conditions on little food and are thus much easier to care for than many other commercial breeds.

Related Read: Do Sheep Make Good Pets? What You Need to Know!

Suffolk sheep originated in England in the late 1700s, and although the breed is raised primarily for meat, their wool is highly valued too. They are known for being docile and quiet animals that are easy to handle and care for, making them great for novice owners. They are one of the most numerous and widespread sheep breeds in the world.

A relatively new breed of sheep that originated in the 1920s in the United States, the Targhee breed was developed by the United States Department of Agriculture in search of a western range breed that had a good yield of both meat and wool. They are hardy, adaptable animals that are used for meat at times but primarily for wool production. They are known for being docile and easy to handle.

Teeswater sheep are raised primarily for meat production but also produce long, tough wool that is highly sought-after by crafters. They are incredibly hardy animals that can adapt to most climates and environments and are docile, long-lived, and easy to care for. They have a characteristically long fleece with an unmistakable topknot of wool on their heads, and they are generally off-white or grey in color.