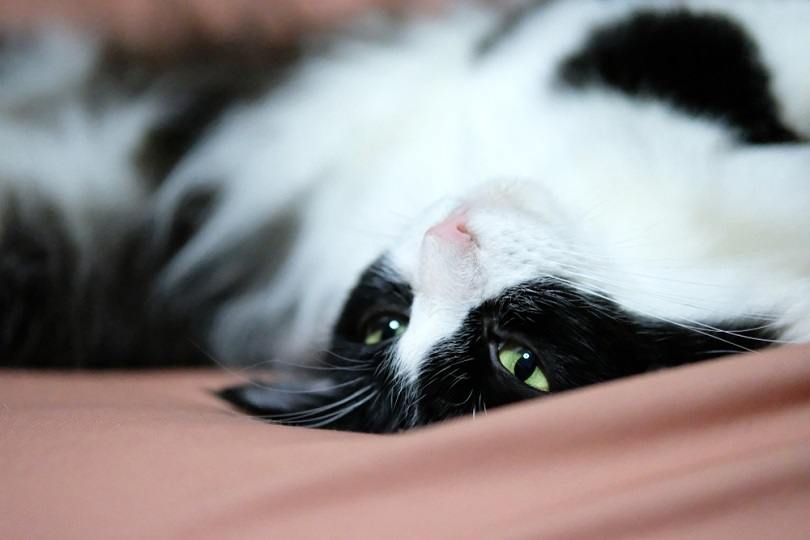 There are several beautiful black and white cat breeds. Often, the markings on these cats are described as tuxedo or piebald. Despite this, the tuxedo cat isn’t a specific breed. It’s just a way to describe color. The feline looks like they’re wearing a formal suit, hence the term.

The Maine Coon is rather popular and common in the US. They’re giant cats with lustrous, long coats. As their name suggests, they originated from Maine, so their coat developed to keep them warm from the colder temperatures.

Maine Coons can come in all sorts of colors and patterns, including black and white. Tabbies are common, though they can come in pretty much any coloration.

These felines get along well with most animals and people. They’re outgoing but not human-dependent like other breeds. They can be great pets for children and multi-animal households. They are affectionate but don’t mind being left alone.

They are also great mousers, so they’re good for keeping rodents in check as well.

The Manx is a rather dog-like cat. They are known for being energetic and playful. You should plan on helping them run off plenty of energy. Otherwise, they’ll likely get into things they shouldn’t. They are intelligent as well, so they need plenty of mental stimulation. Puzzle toys and training can be essential for these felines.

They are sometimes tailless, but they can come in tailed versions as well. The trait is recessive, so only some kittens end up tailless.

They come in a variety of colors, including black and white.

These cats aren’t the healthiest because of their shortened spine. They also shed quite a bit, even when they are shorthaired.

These cats have a unique fur that is short and curly. This leads to very tight rows of fur, which is unique in the feline world. They also have large ears and a trim physique. They look a lot like Siamese, except their colorations are slightly different.

They are very people-oriented cats. They like to hang out with their humans and be involved in whatever they’re doing. They need quite a bit of attention, which also means they require more time than other felines. They can be trained to perform tricks due to their high intelligence. Some can even walk on leashes.

Munchkins are a relatively newer breed that is unique. They have shorter-than-average legs, hence their name. This is the result of a genetic mutation that naturally occurred some years ago. Since then, the mutation has been encouraged to create this unique breed.

These cats come in many different colors, including black and white. Truthfully, they can come in practically any color that any other coat comes in. They are fun cats that make good companions for active families. Despite their smaller legs, they don’t have much difficulty with mobility or anything of that sort.

These felines are well-known throughout the world. Their smooshed faces make them instantly recognizable. They come in many different colors, including black and white. Their thick, long coats require quite a bit of care and grooming, so be sure you have the extra time before you commit to adopting these felines.

This breed tends to be relatively laid back and calm. They aren’t particularly active, nor do they require much mental stimulation.

The Oriental Shorthair looks a lot like a Siamese. They are often confused for a Siamese, likely because the latter is better known. These felines often have green eyes, but their coats come in a wide range of colors. They can be black and white, though they can be nearly any other color as well.

These felines are very smart and loud. They like to meow a lot and will let you know when they need attention. They are even-tempered and make good family cats if you have the time to dedicate to them. Their short coats aren’t very protective against the cold, so they prefer warmer areas. There is a long-haired version of this breed, but it is classified as a completely separate breed.

As their name suggests, these cats evolved to survive the harsh winters of Siberia. They have long, triple coats that do an excellent job of keeping them warm in the elements. They can survive in forested, freezing areas thanks to their coat.

They have become more prevalent in the US over the years, mainly due to their people-oriented nature. They love spending time with their humans. They like cuddling and playtime, making them a good fit for many different households. They are intelligent and active, so they do require some enrichment. Their coat is not prone to mats, but it does shed regularly.

These felines are found in a wide range of colors and patterns. They come in a black and white coloration, though brown tabby is the most common.

The Scottish Fold is most well-known for their folded over ears, where they got their name. They are pretty unusual to look at, which is one of the reasons they are so popular. Laidback and friendly, these felines are great housecats. They can live easily alongside other pets and even children.

Due to their folded-ear mutation, these cats are at a greater risk for cartilage and bone problems. Their coat may be quite short, but it is also very dense and requires regular grooming. They may require a bit of extra time and care.

Once known for their white coats, this breed has developed other coat colorations over the years—including black and white. They still are primarily available in white coats, however. As affectionate cats, they prefer to be with their people the majority of the time. They do not like being left alone, so they do best in households where they will have company throughout the day.

They are also more active than most cats, so physical exercise is required. Lots of toys and climbing structures are necessary to keep these felines busy. Otherwise, they may get into trouble trying to make their own fun.

The British Shorthair is one of the most popular cats in England. They come in a few different colors, though blue (or grey) is the most common. Black and white options are available, but they are rarer. They were initially bred and kept for practical purposes, like hunting mice. Their dense coat keeps them warm and protects them from the elements, though it does not require much grooming.

They are independent cats that don’t mind being left alone, though they will cuddle with their people. They enjoy playtime but aren’t excessively active. Overall, they’re pretty typical felines that make good family pets.

Much like the Manx cat, Cymrics are completely tailless—most of the time. Because their tail is controlled by complicated genetics, they come in a variety of lengths. Some don’t have tails at all, while others have a tiny stump. Their lack of a tail is the result of a genetic mutation. Because they evolved on the Isle of Man, which is a relatively small area, this genetic mutation spread until it affected most of the felines on the island.

These cats come in many different colors today, including black and white. They are people-oriented and don’t like to spend too much time alone. They do best in families where there is always someone to keep them company. They can get lonely when left by themselves, which can result in destructive behaviors.

Like their name might suggest, these felines share a complicated history with the Ragdoll, which is a much more popular cat breed. They are pretty large with a muscular and rectangular body. They’re lap cats and spend most of their time lazing around. However, they do like to play occasionally.

These cats do like quite a bit of attention, usually through cuddling. They will greet certain people at the door and are well-known for following their owners around the house.

The Devon Rex is a highly lovable cat. They are very affectionate with just about everyone and love to cuddle. They aren’t super active and prefer to lounge around instead. Their unique appearance has made them rather popular throughout the years.

These felines have extremely short hair. This means they require some special care, like sunscreen in the summer if they are allowed outside. They come in black and white, as well as a variety of other colors.

Looking for info on other inter