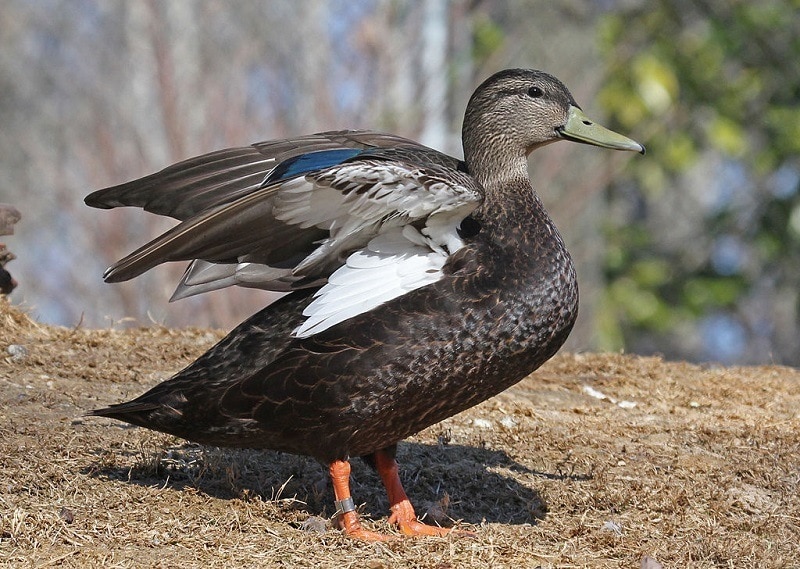 There are more than 120 duck breeds globally. Although all of them have different characteristics and temperaments, their plumage is the most convenient way to tell the difference between the various breeds.

The duck that people in North America and Europe probably are the most familiar with is the mallard, with their grey bodies and beautiful green heads. However, plenty of other kinds of ducks have a vast array of plumage shades and patterns.

This article looks at all the duck breeds with primarily black plumage, from the Black Scoter to the Pacific Black Duck.

The Black Scoter is a seaduck. The male is covered in velvety black plumage, with a bright orange knob at their bill’s base. This pumpkin-orange color against the black body makes them extremely distinctive from almost any distance. Females are not as easily identified because they have a motley brown color pattern. Their most distinctive trait is a blackish head cap with pale tan cheeks.

Black Scoters live in the sea in higher latitudes. They forage for insects in the summer and dive for mussels during the summer. Another way to ID these ducks is by their call. They are highly vocal waterfowl, with males making an incessant crooning sound reminiscent of the wistful dove.

There are not many breeds of duck whose origin is such a mystery as that of the East Indie duck. They were first recorded in the early 1800s in the U.S.A. and then in the U.K. in the 1830s. There are some theories that the breed was developed from the Mallard, and others say that it was mixed with the American black duck.

Now they are a favorite on the show bench and inarguably a beautiful bird. They only come in one color typology: a beautiful deep black plumage that when hit with sunlight in just the right way, turns a bright, sparkling green. The females are a much lighter tan color, without many feather markings.

The Cayuga duck is another beautiful black-colored duck. They are a medium-sized breed and were bred domestically. They typically weigh between 7 and 8 pounds and are often raised for their meat and eggs.

Almost all the male’s feathers are black with a green shade that only becomes more brilliant in the sun. As they age, they might develop white spots across their feathers. Their bills are always black.

These ducks are quite hardy and have a long average lifespan, living between 8 to 12 years. They truly live up to the idea of being a black duck, since even their eggs are black.

Pomeranian ducks are the rarest duck breed on this list. They are a developed breed crossed from other German domesticated duck breeds. They are a beautiful species of waterfowl, known for their attractive appearance and shimmering plumage.

Pomeranian Ducks are kept for both their meat and eggs, but they make excellent pet ducks too. They are also considered an “ornamental” species because they have such a beautiful deep black color, with shimmering green and blue shades across their feathers. They are a highly trainable duck that tends to be aggressive with other breeds and very chatty.

Pomeranian ducks have a short lifespan, an average of 4 to 8 years. They are only a medium-sized breed, and the hens lay an average of 80-100 years each year.

One species of the Platyrhynchos family is the Swedish Blue duck. They are quite attractive and are hardy to both the cold and the heat, as long as they have access to clean water.

The name “Swedish Blue” is a bit deceiving when it comes to their placement on a list of black duck breeds. However, they have plumage similar to those of the other breeds on this list. It is a deep black, with what appears to be a blue-gray sheen over the top. It is easy to ID these ducks because they have black bodies with a distinctive white bib from under their bill to halfway down their chest.

Swedish blues were developed in 1835 and were imported to North America soon after. They are quite common to raise as a poultry bird or keep as a pet because they have such an agreeable personality.

The African Black duck is genetically similar to the mallard group, and they have relatively similar plumage patterns. The primary difference is the dark shade that they have compared to the brown shade of the mallard.

The African Black duck is a beautiful dark breed. They have predominantly black plumage with white markings on each feather across their back and faces. Their wingtips are blue, and they have a blue bill and bright yellow feet with brown eyes.

African Black ducks are commonly found across the continent of Africa. Their hardiness allows them to spread across an expansive range, going from Angola to Zambia, Malawi, Botswana, and South Africa. They prefer to live in fast-flowing but shallow rivers with rocky substrates, eating primarily waterweeds and aquatic insects.

Their name notwithstanding, the American Black Duck is not as evenly black as many other birds on this list. The middle of their feathers is a tawny black color, edged with light brown all the way around. They have light tan necks and cheeks, with three black stripes running from their beak to the back of their heads. The male and female look similar, with the male having a yellowish beak and the female being slightly darker with a tan beak.

The American Black Duck primarily lives in lakes and ponds on the East half of North America. They largely scavenge for insects all year round and are considered a dabbler duck instead of a diver. These birds are an incredibly old variety of ducks, with Pleistocene fossils being unearthed in Georgia and Florida from more than 11,000 years ago. The oldest American Black on record was recorded at 26 years and 5 months old.

The Pacific Black Duck is commonly known as the PBD. They are a dabbling duck native to Indonesia, Australia, New Guinea, New Zealand, and across the majority of the islands in the southwestern Pacific.

Even with “black” in their name, they are not as dark-colored as many other varieties on this list. They have black on the middle part of their feathers, with tan around the edges and green-blue wingtips. You might find them on other lists as being predominantly brown ducks, even if they are classified as black ducks.