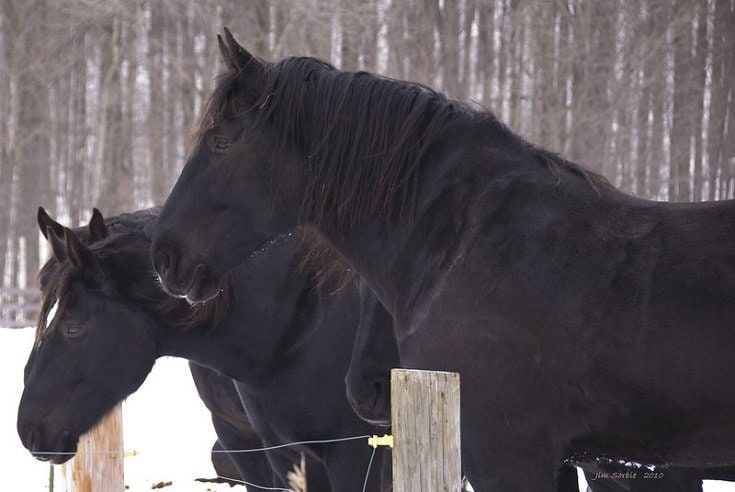 Black is a widespread color among different horse breeds because it’s one of the dominant versions, or alleles. Anything is possible with equines. There’s an elegance about black-colored horses because the color accentuates their lines and form. It’s even more noticeable in an in-shape, sculpted horse. Of course, genetics has the final say.

Our roundup includes horse breeds in which black is possible and those in which they are the predominant color. You’ll find a wide range of animals with different body conformations. Researchers believe that horse domestication occurred around 3500 B.C., which is a long time to give rise to variations within the species.

The Mustang has one of the most unusual stories among black horse breeds. After early horses became extinct in North America, the Spanish brought the equines back to the continent in the 15th century. The rest, as they say, is history. The breed continues to exist as a feral animal in the United States west of the Continental Divide. Their past speaks to the romance of the American West.

The Percheron is a French draft horse that has a stocky, muscular body conformation that suits their job. While the breed got their start in France, they soon appeared in the United Kingdom and across the pond in the United States because of their usefulness. The world wars in Europe disrupted the importation out of their native land. They have seen a resurgence as wineries revert to draft horses to work their farms.

The Lusitano is a Portuguese breed with an impressive lineage and showing record in the dressage ring. Chestnut is the more popular color, but black is fitting, given their role in competition. They are medium-sized horses, reaching a height up to 15 hands or more. Their body conformation is muscular yet lean, which gives them an advantage.

The Thoroughbred epitomizes everything that is elegant and regal about the horse. Black is a natural choice for a color that brings a sleek body conformation to the forefront. This breed’s primary job is racing, at which they succeed. Their start on the circuit begins in England in the 12th century. They made their way to the United States with colonization in the 18th century.

The Nonius has an unmistakable presence. It’s hard to ignore the stocky, muscular form of this Hungarian horse. While they have worked as a draft horse, the Nonius also had a place in the royal courts that recognized the grace of this breed. Unfortunately, the numbers of this horse have dwindled in recent years, worsened by crosses with other breeds.

The Giara Horse is another indigenous breed, this time from Sardinia, an island off the west coast of Italy. They are a smaller animal at only 13 hands high at the withers. Selective breeding for size makes sense, given their use in farming. It gives the horse an advantage when walking across the rugged terrain of this location. They have only recently crossed the line into the equestrian realm.

The Trakehner resembles the Thoroughbred because of their stately stance. They are a tall, warmblood horse breed from Russia. This equine is a sculpted animal with a lean body that is well-suited to their role in the show ring. This horse saw time in the cavalry branch of the military. They are an agile runner and a top competitor in cross-country events, dressage, and show jumping.

The Morgan is a jack-of-all-trades in the equine world. You’ll find this breed at sporting events, in the show ring, on the battlefield, or on the farm. They are truly an American horse, with their military history during the Civil War. They are a muscular animal that does well on the track, particularly with harness racing.

The Tennessee Walker is the closest thing that you’ll come to a gentleman’s horse. This animal is at home on the trail or in the show ring. They have a sleek body conformation that is suitable for their use as a pleasure riding horse. Their moniker refers to their characteristic gait that is the essence of elegance. Unfortunately, they have also been the victim of abuse in the show circuit.

The American Quarter Horse wears two hats, one as a working animal and the other as a competitor. They often have a stocky build, which makes them well-suited to ranching. They are surefooted and can maneuver well when dealing with livestock. They also succeed in the show ring, exhibiting those same characteristics. Unfortunately, they have also fueled inbreeding concerns that have increased certain congenital diseases.

The first thought that you may have when you see the Friesian is that this horse was probably at home during the Middle Ages. They are a muscular breed, with a stocky body conformation and strong legs. Despite their large size, they move gracefully, with a gait worthy of a Tennessee Walking Horse. They can reach heights up to 17 hands, which backs up their courageous nature.

The Arabian is a breed that you can’t help but notice. They have a regal appearance, and people have selectively bred them to make the perfect human companion. They are capable of many tasks that make them invaluable. Their endurance is legendary. It helps that the breed is easily trained and bonds with their owners readily.

The Murgese is an Italian breed that has a long history with the military. They are powerful horses that have earned respect for their superior endurance, docile nature, and versatility. They are handsome equines that deserve the respect they receive. The breed has a loyal following of supporters who maintain the standards of this popular horse.

The Irish Draft Horse holds the honor as the national equine of their native land. They are a large, cold-blood breed that can reach heights of nearly 17 hands. This horse has a presence. There are four classes based on their body conformation and compliance with the breed standard. This horse has crossed the farming realm to law enforcement mounts.

The Kladruber is one of the oldest European breeds that you’ll encounter. This one is best suited to pulling a carriage instead of a plow. Gray and black are the only permitted colors for this horse. The profile of the Kadruber is recognizable with their angular lines. They have an affinity with royalty in their native Czech homeland.

Black horse breeds include a wealth of equines, all serving different jobs with different histories. Genetics put this color to the head of the class with many of them. It has enhanced the conformation of many of them, giving them a beauty almost beyond description.