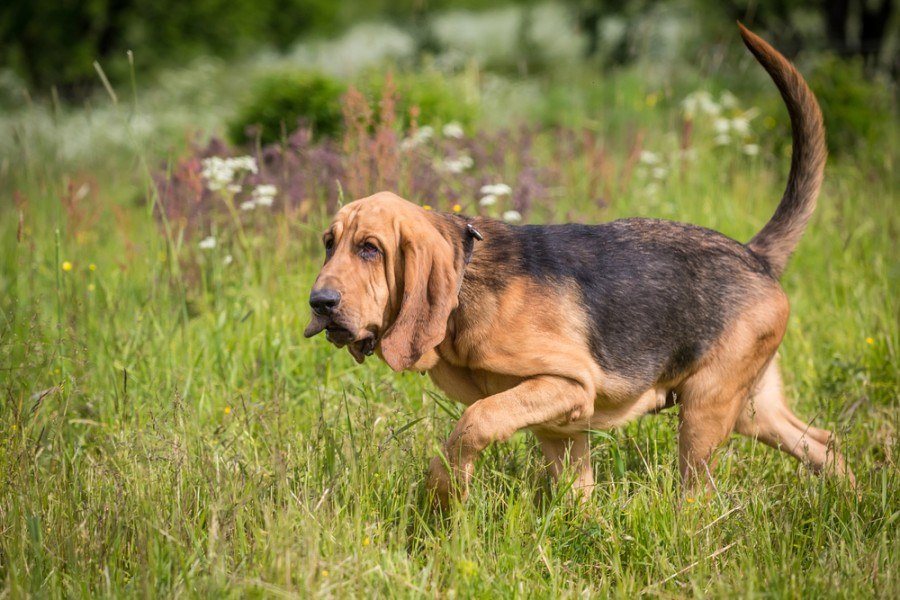 The inspiration for the phrase “nose like a bloodhound,” comes from these large, wrinkly hounds, famous for their ability to relentlessly track the scent of missing or fugitive humans. Bloodhounds are the most efficient finders of people. No modern technology yet invented is as sensitive or accurate as the nose of a Bloodhound. When not tirelessly following a scent, however, Bloodhounds are sweet-tempered, docile dogs who enjoy the company of humans and other dogs. While they do present some challenges, Bloodhounds can make wonderful companions for the right family or individual. Read on to learn more about the Bloodhound and to help decide if this is the breed for you!

Bloodhound Puppies – Before You Buy…

What’s the Price of Bloodhound Puppies?

Bloodhound puppies can cost anywhere from $600-$1,500 from reputable breeders. The most common price point for Bloodhound pups is around $1,000. Be sure you are purchasing a puppy from a reputable breeder rather than a pet store or a puppy mill. The American Kennel Club (AKC) is a good place to start your search for responsible breeders. Local veterinarians or other Bloodhound owners may also be able to point you to a breeder. Responsible breeders will always ensure puppies are vet-checked and that their parents are healthy and free from known health conditions.

If you prefer to adopt rather than purchase a Bloodhound, look for Bloodhound-specific rescue groups in your area. The cost to adopt a Bloodhound varies by rescue group but will almost certainly be less than the cost of purchasing a puppy. While it’s not impossible to find Bloodhound puppies available for adoption, it’s more likely to be adult dogs who find themselves in need of a new home, something to consider as you decide whether to buy or adopt a Bloodhound.

While not created directly by a deity, Bloodhounds were first developed by prominent members of medieval religious orders. About a thousand years ago, monks in Western Europe carefully bred and maintained large packs of Bloodhounds on the grounds of their monasteries.

2. Bloodhounds Didn’t Get Their Name Because They Track Blood

Unlike other hound breeds like the Coonhound or Otterhound, Bloodhounds aren’t named after what they hunt or track. The name “Bloodhound” comes from the term “blooded hound,” used to describe the dogs bred by the monks. During that time in history, the term “blooded” referred to being of noble or aristocratic blood, which is how the early Bloodhounds were perceived.

3. Evidence From A Bloodhound’s Tracking Is Admissible In Many Courts

No, they don’t have to swear to tell the whole truth and nothing but the truth (their handlers take the oath instead), but Bloodhound tracking evidence is often admissible in a court of law. The handlers must provide proof of the dog’s pedigree and training for their evidence to be accepted. Some states are more skeptical than others, but quite a few do allow Bloodhounds to serve as witnesses for the prosecution, so to speak.

Temperament & Intelligence of the Bloodhound

Bloodhounds are typically friendly, social, and tolerant dogs with a strong stubborn streak. They are not considered the most intelligent of dogs, not necessarily because they aren’t smart, but because they are independent and relentless when trailing a scent. Bloodhounds are smart enough to find and follow a scent for miles and sometimes days on end but they also probably aren’t going to pay any attention to commands while doing so.

Bloodhounds get along well with children and are known to be quite tolerant of them. Because they are a large and sometimes clumsy breed, they should be supervised with smaller children in case of accidental knockdowns and the like. Bloodhounds are social dogs who prefer to be involved in the family rather than relegated to outdoor living. Families who want to share their home with a Bloodhound should be aware that the Bloodhound is a drooler, because of their long jowls. Bloodhounds may also display common hound traits like loud baying and a doggy odor.

Because they were originally bred to work as part of a pack, Bloodhounds usually get along well with other dogs. Early socialization is important, especially with smaller dogs who occasionally may be viewed as prey. Some Bloodhounds can be aggressive to other dogs of the same sex.

Bloodhounds can get along with cats, especially with early socialization. Like smaller dogs, cats can sometimes be a bit too prey-like to safely live with Bloodhounds, so some caution is in order. Smaller pets such as rodents and birds should be kept away from Bloodhounds.

Things to Know When Owning a Bloodhound:

Here is some basic information on what is required to successfully and properly care for a Bloodhound.

Bloodhounds should be fed a high-quality, nutritionally balanced diet either commercially prepared or homemade. If you choose to feed a homemade diet, be sure to consult your veterinarian for help making sure it is properly balanced. Make sure you feed your Bloodhound the correct food for their age, whether puppy, adult, or senior. Like most hounds, Bloodhounds love to eat, so you will need to carefully monitor their weight and adjust their food intake accordingly.

Although Bloodhounds are often thought of as lazy dogs who sleep on the porch all day, they were bred to tirelessly follow a scent for miles on end and are more active than is commonly assumed.

Bloodhounds require daily exercise, either a walk or safe play in an enclosed area. They should always be kept on a leash when not within an enclosure as they will take off after an enticing scent no matter where it may lead them. A fenced yard is ideal as a safe play space but make sure the fence is high and sturdy enough to contain a large, strong, and escape-prone Bloodhound who will also attempt to dig their way to freedom if given the opportunity.

There’s really no way around the fact that Bloodhounds can be challenging to train. While they are devoted and docile dogs, their independence and stubbornness make patience and skill a must for successful training. Getting an early start to socialization and training will yield the best results as Bloodhounds tend to get set in their ways and bad habits can be hard to break. Bloodhounds like to be in charge, so firm, consistent handling is important. They will do best with positive training, full of rewards. Just make sure to keep an eye on your dog’s weight if you find that treats are their preferred reward.

Bloodhounds are a short-haired breed but they do shed, usually once or twice a year. Weekly brushing will help keep the amount of hair in your house to a minimum. Bloodhounds do require regular bathing to keep their doggy odor at bay. Keep the Bloodhound’s floppy ears clean to help prevent infection. As with all dogs, the Bloodhound’s nails should be kept trimmed and their teeth brushed regularly.

Bloodhounds are generally healthy dogs. They do suffer from a few inherited health conditions and are, like all large and deep-chested breeds, susceptible to a very serious medical emergency called bloat. While not exactly a true health condition, it should be noted that Bloodhounds, especially young ones, are very prone to eating anything and everything they can get a hold of, including non-digestible items like children’s toys and socks.

This unfortunate tendency often leads to a visit to the veterinarian.

Bloodhounds are prone to two eye conditions called entropion and ectropion, which involve the eyelid rolling abnormally either inward or outward. This can cause the eyelashes to rub painfully on the eye or the eye to become too dry. These conditions may be corrected with medications or sometimes with surgery depending on how severe they are.

Because of their long ears and wrinkly skin, Bloodhounds are prone to ear and skin infections. Check and clean your Bloodhound’s ears regularly and make sure their skin folds stay clean and dry. Contact your veterinarian if you are concerned your Bloodhound may be developing an infection.

Bloat is the common name for a medical condition called gastric dilatation and volvulus (GDV). GDV is a life-threatening emergency that most often occurs in deep-chested breeds such as the Bloodhound. When dogs bloat, their stomach becomes distended and twists on itself. The distended stomach just keeps getting bigger because the twist traps the gas and stomach contents. This is not only extremely painful but the stomach also becomes so large it begins to compress nearby blood vessels, disrupting the Bloodhound’s circulation and leading to shock and death. All Bloodhound owners should make sure they know how to avoid bloat as well as be able to identify early signs that their dog is bloating. Immediate medical attention is necessary if the dog’s life is to be saved.

Bloodhounds can experience both hip and elbow dysplasia, bone disorders where the joints don’t fit together properly. These conditions are inherited, so reputable breeders will have their dogs’ hips and elbows checked before breeding from them. Dysplasia may not be a life-threatening health condition, but it can cause a Bloodhound considerable pain and diminish their quality of life. Severe cases of hip or elbow dysplasia may require surgery to correct.

Male Bloodhounds are usually noticeably larger than females. It is also reported that females tend to socialize more easily than males and that they have a longer attention span. These characteristics may make female Bloodhounds a bit easier to train than males.

As you have seen, Bloodhounds can be big, lovable companions with the right mix of training, socialization, and living situation. Wrinkly, mournful-faced Bloodhound puppies are hard to resist but keep in mind that puppy will grow into a large, stubborn adult dog with a penchant for drooling. Make sure you do your research and try to spend some time around adult Bloodhounds before you decide to bring a Bloodhound pup into your family. If you do decide this is the breed for you, hide all your stray socks, fortify your backyard fence and make sure you work with a responsible breeder or rescue group to choose your new companion.