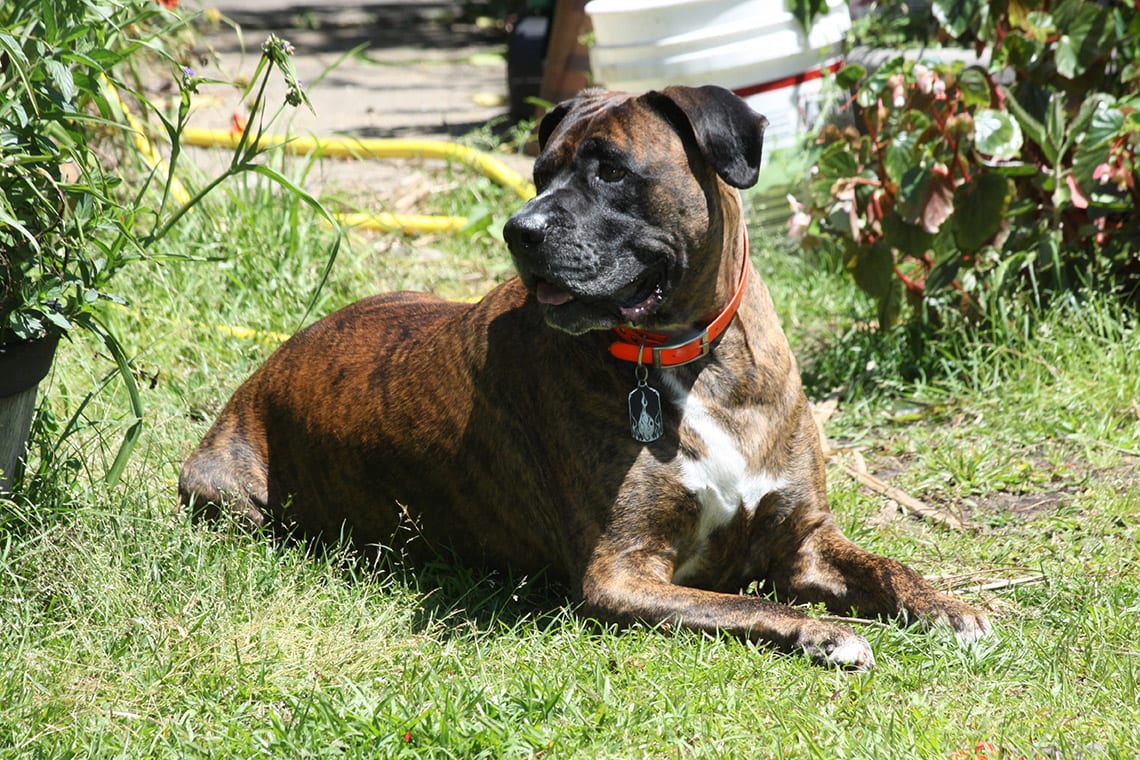 Dogs with brindle coats have been around as long as dogs themselves. A brindle coat is sometimes described as “tiger-striped” but is usually more subtle in appearance. It commonly consists of streaks of color that are darker than the dog’s base coat color, while some dogs also have coats referred to as “reverse brindle,” which consists of light streaks of color on a dark base coat. These strips can also be broken up into shorter lengths, sometimes appearing as spots. This subtle distinction is called brindle merle but is caused by the same recessive gene carried in brindled dogs.

A brindle coat is a stunning feature in dogs and can be widely varied depending on the breed. We’ve put together a list of 20 breeds that carry the brindle gene, so you can see this unique color variation in all its glory.

The Boxer is a powerful and athletic dog, with a short to medium-length coat that can commonly have bridle markings. They are intelligent and easily trained dogs, even with their slight stubborn streak. Boxers with brindle coats are fairly common and are usually a mixture of red and brown brindle markings with a white underbelly.

Originating in Central Africa, the Basenji was bred as a hunting dog uniquely known for their lack of barking. They are short-haired dogs, with all white paws, chest, and tail, and characteristic erect bat-like ears. Basenjis with brindle coats are rare and often consist of black stripes on a brown, red, or chestnut background.

The French Bulldog, or “Frenchie,” is a popular breed of toy dog in the United States, recognizable by their excessively wrinkled skin and massive bat-like ears. These highly affectionate and gentle dogs make great family pets, as they don’t require massive amounts of grooming or exercise. Frenchie’s are commonly found with brindle and brindle-merle coats, and the most frequent combination is a fawn background coat with grey or black markings.

The combination of the massive size and brindle coloring in a Great Dane is an imposing but beautiful sight. These gentle giants are friendly dogs and make great family pets. Brindle Great Danes can come in a variety of combinations, most commonly yellow-gold base coats with black markings. Brindle Great Danes are said to have fewer genetic health concerns than solid colors, especially regarding vision and hearing issues.

The strong, muscular, and rather intimidating Bullmastiff breed has a relatively high occurrence of brindle coats, making the breed look even more imposing. These dogs are gentle by nature, though, and if anything, are just fairly stubborn and hard-headed. They have a short, dense, and rough coat that when brindled, is usually a fawn or red background with black stripes. These dogs have a relatively short lifespan, with most living only 7-8 years or in rare cases, up to 10.

The most popular of all racing dogs, Greyhounds carry the brindle gene, but it is a fairly rare occurrence in this breed. Traditionally bred as hunting dogs, these speedy canines can reach speeds up to 45 mph. They are well-loved as family pets due to their sweet and gentle nature and make great playmates for children. They have a smooth, short coat that can come in a wide array of brindle combinations, commonly fawn with black or grey markings.

Extremely intelligent dogs that are often used for search-and-rescue and police work, Dutch Shepherds can have some of the most striking brindle coats. They were originally bred as herding dogs by shepherds and farmers looking for a dog who could withstand the harsh Dutch outdoors. Their short and rough coats are often brindled, most commonly with various shades of brown, gold, and silver.

These dogs were originally bred in England as small, fast, and tough fighting dogs, used for baiting bulls in animal fights. The Staffordshire Bull Terrier is now commonly kept as a family pet that is known for their loyalty, courage, and intellect. They have a smooth, short coat that can commonly be brindled in red-and-brown or fawn-and-black combinations.

Although fairly uncommon, the feisty Jack Russell also carries the brindle gene. A highly intelligent breed, Jack Russells are loving and affectionate dogs who are easily trained. They are hunting dogs by nature, so they can be feisty at times and prone to barking at every opportunity. The brindle markings on Jack Russells are usually found in the brown, black, or tan parts of their coats, never in the white. It is usually a wavy black- or tan-striped pattern.

The Plott Hound is a large scenting dog originally bred for hunting bears and wild boar, with an abundance of energy, stamina, and agility. They are intelligent and loyal dogs who are highly protective of their owners. They have short and wiry coats that are commonly brindled and reverse-brindled, with combinations of brown or tan basecoats and black markings.

Although fairly rare, Welsh Corgis do carry the brindle gene, which comes out in the brown and tan portions of their coats in black stripes or merle markings. These intelligent little dogs make great family pets, and due to their herding history, they can often be found attempting to herd children or other family pets. This also makes them bark often, an essential component of herding!

The small and wire-coated Cairn Terrier is one of the oldest Terrier breeds, bred to chase fowl and game in the Scottish Highlands. A brindle coat is fairly rare with Cairn Terriers, so puppies with this gene usually fetch higher prices. The brindle is usually black or grey stripes on a tan, medium-length basecoat.

The Cane Corso is a large, muscular dog with Italian origins, commonly used in policing and as guard dogs. They are intelligent, noble, and loyal dogs who will do whatever it takes to protect their owners, earning them a feared reputation. However, with the right training, they are not overly aggressive animals. They are commonly found with brindled coats, usually in combinations of black or grey stripes on a tan basecoat.

These strong and powerful dogs have a reputation for aggression but are no more vicious or aggressive than other terriers. With the right training, they are sweet and loyal dogs who form strong bonds with their owners. The brindle Bull Terrier is highly sought-after, and puppies can fetch high prices. The brindle can come in a wide variety of colors and patterns, usually combined with a pure white chest and feet.

Descended from the English Bulldog, American Bulldogs are an iconic part of American culture and history. They are rugged, tough, and sturdy dogs commonly used as guard dogs and show dogs. They are confident and intelligent pets that form strong bonds with their owners but need the right training and early socialization. Brindle is commonly found in American Bulldogs, usually brown basecoats with black or dark grey stripes and merle patterns.

A post shared by The World Of Luis (@luisworld123)

The Corsican is a large breed that originated from the island of Corsica. They are short-haired dogs commonly found with brindled coats. These dogs are highly intelligent and have calm and gentle temperaments, and they have been used in both herding and hunting. They consequently become highly attached to their owners and are wary of strangers.

Whippets are a medium-sized dog with a strong resemblance to Greyhounds. But their smaller size does not equal a shortage of energy, which they have an abundance of. They are friendly, good-natured dogs who make great pets for athletic owners, but they rarely bark and are not ideal watchdogs. They are commonly white or brown, with darker “saddles” of brindled markings.

The Treeing Tennessee Brindle lives up to its name, commonly found with a brindle coat, and a knack for trapping game up in trees for hunters. This hound is most widely known for its beautiful brindle coat that is short, dense, and smooth. They are a fairly new breed, originating in the United States as early as 1960. They are high-energy dogs who require a great deal of exercise to stay happy and healthy.

The American Mastiff can frequently be found with a brindled coat, and this is a popular and much sought-after trait among Mastiff owners. They are calm, affectionate, and loyal dogs who attach strongly to their owners, earning them the deserved reputation of gentle giants. Being a fairly stubborn breed, they can be difficult to train but are not known for being aggressive. This makes them a great family pet who gets along famously with children, and they will quickly become the family’s trusted protector.

Anatolian Shepherds are frequently seen with bridle coats, usually with a brown, tan, or fawn coloring. This breed originated in Turkey and was bred to protect livestock due to their excellent hearing and eyesight and was first bred as far back as 2,000 BC. They can be fairly protective and territorial due to this heritage, but with the right training and early socialization, they make great family pets.