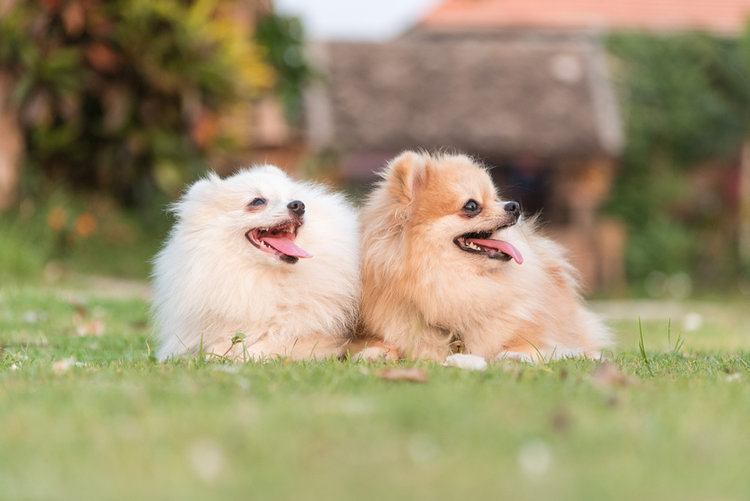 You might be surprised to learn there are more than 150 recognized dog breeds in the United States, and there are another 75 more waiting to be accepted. If you are a dog lover, it can be a struggle to learn about each breed if you don’t have a good system to sort through them.

In this article, we will look at 20 brown dog breeds of all sizes to help you learn more about them. For each listing, we’ll include a picture so you know what they look like, as well as a short description telling you a little about the breed so you can see if it interests you. By the end of this list, we’re sure you’ll find a few breeds you would like to have in your home.

The English Mastiff is an extremely large dog that can weigh up to 240 pounds fully grown. It’s the largest dog breed in terms of mass, and it has a large square head with drooping jowls. Despite its intimidating appearance, it forms strong bonds with family members and is quite affectionate. It’s calm and is rarely concerned about what’s happening around it unless it feels it needs to protect its master.

The Newfoundland breed is another large working dog. This breed is extremely strong, and many owners use it to pull carts and to work farming equipment. It’s highly intelligent and easy to train, so it often helps out with search and rescue missions. It’s a hardy dog that can withstand cold temperatures and webbed paws for enhanced swimming.

The Chesapeake Bay Retriever is another large breed that excels at swimming. It can grow to more than 100 pounds, and hunters use it for swimming out for ducks that fall from the sky. It can swim for several hours without getting tired, and its thick coat keeps it warm in the cold waters. It’s a happy breed that enjoys running and playing and is affectionate toward children and other dogs.

The Labrador Retriever is a swimming dog that doesn’t get quite as large as the Chesapeake Bay Retriever and usually tops out at about 80 pounds. Breeders in the United Kingdom created it from several Canadian dogs, and it has since become one of the most popular dogs in the world. It has a pleasant and outgoing temperament, and it follows commands well, so it’s popular in the military and other official organizations. It also makes a great family pet and watchdog.

The Leonberger is a German dog that can grow to weigh more than 140 pounds. It has a friendly disposition and likes to be around family members. It’s recognizable by its lion-like mane around its neck and chest. Due to so much fur, you will need to brush it frequently, and it’s prone to becoming overweight, so these dogs need to stay active and go for frequent walks.

The Great Dane is another German dog that’s been here since the Middle Ages. It can grow to weigh almost 180 pounds, and breeders used it for hunting bears, boar, and deer before people started keeping it as a pet. It’s a gentle dog that enjoys the company of children and will usually stay around family members unless it has a job to do.

The Irish Water Spaniel is the tallest of all Spaniels and can stand 24 inches tall. Most owners describe it as having a clownlike personality because it engages in fun behavior to get your attention. It gets along with children and pets as long as they don’t pull its fur, and they make excellent watchdogs due to its fierce-sounding bark. It will require frequent grooming to keep its curly hair from getting tangled.

The Cane Corso is an ancient dog that may date back to Rome. It’s a fierce-looking dog unrivaled in protecting its family, but it’s friendly and affectionate toward family members despite its aggression toward strangers. It’s also a good runner, and farmers can use it to herd livestock and protect the animals.

The German Shorthaired Pointer is a medium to large-sized hunting dog. It has powerful legs that allow it to turn quickly and large floppy ears that hang not the side. It’s well suited to family life, and early socialization will help them get along better with other pets. It requires a lot of activity, and it can become destructive if it gets bored, so it’s not a good choice for people that spend a lot of time away from home.

The Pit Bull is a controversial breed in many areas of the United States, but these dogs are extremely friendly and affectionate despite their bad reputation, even toward strangers. It’s a powerful breed with a history of dogfighting which is where it gets its name. However, now that dogfighting is illegal, more breeders are creating these dogs to be even-tempered.

Many people like to refer to the Affenpinscher by its other name, the Monkey Terrier, which it gets in response to its amusing behavior. It’s a curious breed and will often be under your feet as you move through your house. It has very shaggy fur that is popular with children, especially when it wants attention and starts acting like a clown.

The Dachshund is a popular breed that many people will recognize as a “hot dog” or “weiner dog”. It has a long body and short legs, and the hair can be long or short. It’s surprisingly strong and excels at digging. It also has a powerful nose. This breed is playful and affectionate but can also be stubborn and strong-willed, so it can be a challenge to train.

The Maltese breed is a small exhibition dog that can have long or short hair. It has a curly tail and droopy ears with some darker skin pigmentation around the face. The hair is shiny and soft without an undercoat, and they usually have brown eyes. These dogs make excellent companions, and their small size makes them suitable for apartment life.

The Scottish Terrier is a small compact dog with a wiry, weather-resistant coat that often gets quite fuzzy around the face. These dogs enjoy playing and will chase a ball for hours and even play by themselves if no one plays. These dogs tend to be jumpers and will repeatedly hop up and down when company comes to the door.

The Cavalier King Charles Spaniel is a small but fearless breed that also happens to be quite attractive. It’s energetic and enjoys following scents that it picks up along the walk. You will need to keep this breed on a leash, or it can easily get lost following some long-gone animal. It enjoys the company of humans and adapts quickly to most living arrangements.

The Pomeranian is a small breed that rarely gets more than a foot tall. It has a thick coat and a plumed tail that will be a hit with children. It’s a lively and playful dog that enjoys the company of humans or other pets. It tends to form strong bonds with other dog breeds and will cooperate with it to get what it wants. For instance, it might stand on a large dog’s back to reach the counter, and in return, it will get something for the big dog from the counter.

The Chihuahua is one of the most popular small dogs in America. It became very popular in the late 1990s as the mascot of the Taco Bell franchise, and it remains popular today. These dogs demand a lot of attention and can misbehave if they don’t get it. Most experts recommend only purchasing this breed if you are looking for something to devote your life to.

The French Bulldog is one of the best breeds for family life. It doesn’t require a lot of exercise, unlike most other breeds, and its coat is easy to maintain. It’s very easy going and will be happy to lay at your feet or on your lap for the entire day. It doesn’t bark much and loves the attention of family members, including children, and its small size makes it suitable for almost any living arrangement.

The Shih Tzu is another small dog breed available with long or short hair. Most people will recognize this breed from its unusual name, but it can make a great pet as well as a profitable show animal. The long hair version requires meticulous grooming by someone who intends to stay home to care for the dog several hours a day. This breed is friendly to its owners but tends to be barky when strangers are around.

The Labradoodle is a favorite among pet owners because it’s low shedding and hypoallergenic. It can still produce some dander in its urine and saliva, but it will be much easier to live with than other breeds if you suffer from allergies. It’s also affectionate and sociable, often coming out to meet strangers at home and on walks. It’s never aggressive, and children love its soft curly fur.

Of the breeds on this list, we recommend the French Bulldog for most people because it’s the most compatible with our busy lifestyles. The Labrador Retriever and Labradoodle are also great choices for many people. If you have a large home with plenty of room to run and play, the bigger dogs might be the better choice. If you live in a tiny apartment in the city, you are better off sticking to the small dog list.