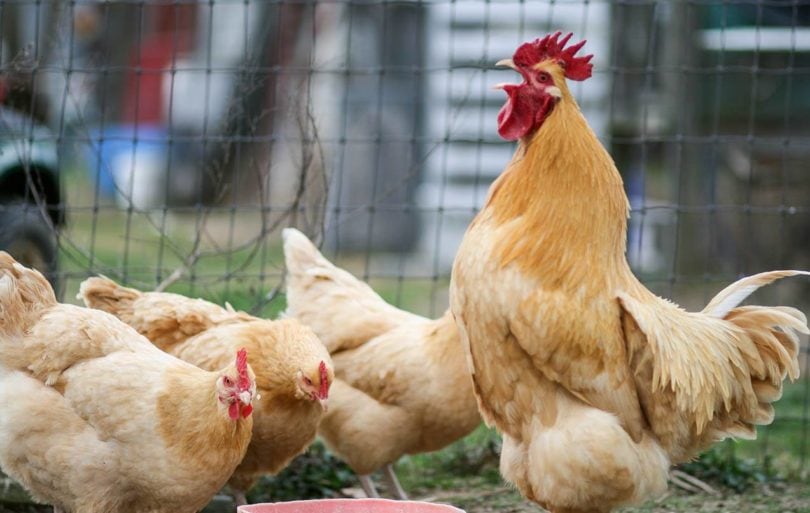 Of course, you could wait until the hens start laying eggs. That’s a fool-proof way to tell for certain. But maybe you don’t want to wait several months to figure it out. How then would you go about telling apart your Buff Orpingtons? While waiting for eggs is definitely the most certain sign, there are plenty of other indications as to the sexes of your chickens, which we’re going to cover in this article.

Male Buff Orpingtons are larger than females with several physical characteristics that can help to differentiate them from the hens. Even at four weeks old they might be offering clues as to their sex.

Naturally, Buff Orpington roosters are the larger, more robust chickens. When fully mature, the roosters will weigh 8-10 pounds on average. The larger specimens can stand 15 inches tall and are generally taller than the hens. Roosters also have noticeably thicker legs to support their extra weight.

As they mature, you’ll begin to see pointed cape feathers developing on the roosters’ back, neck, and shoulders. Males’ combs and wattles are also larger than females and display a brighter shade of red.

With all chicken breeds, roosters are more likely to be aggressive and territorial than hens. But one of the reasons Buff Orpingtons are so popular is that they generally have a very calm and docile demeanor; even the roosters. Still, some roosters can display territorial tendencies, though it’s rarer with Buff Orpingtons than roosters of other breeds.

Young Buff Orpington roosters called cockerels will begin to show their dominant side as they start to reach sexual maturity. They’ll begin to strut and stick their chests out, which is a behavior you won’t see in the hens.

One of the earliest indicators of roosters is crowing. Buff Orpington roosters will begin trying to crow as young as four weeks, sticking out their necks and making a small chirping sound. Eventually, this will be a full-on cock-a-doodle-doo, but at this age, it’s little more than a squeak!

Buff Orpington roosters are suitable for chicken keepers who wish to breed their Buff Orpingtons. Because rooster meat is generally considered tougher and stringier than the meat you harvest from hens, they’re not favored for meat production. Naturally, roosters can’t lay eggs either, so they’re really only necessary when you want to breed your chickens and need the rooster to fertilize the eggs.

Hens are generally considered to be the more utilitarian chickens. They’re great for egg production and are also the preferred sex for meat.

Buff Orpington hens are considerably smaller than the roosters, weighing a maximum of eight pounds and generally standing just 12–13 inches in height. They have smaller wattles and combs that are a darker, less vibrant hue of red and appear to be faded. Hens lack the cape feathers that roosters display.

Hens are usually thought of as the calmer, friendlier birds in any breed of chickens. Buff Orpingtons are already known as docile and friendly birds, and even the roosters don’t often become aggressive or territorial. The females are friendly most of the time, though this won’t make them easier to tell apart since the roosters aren’t too different temperamentally.

The biggest difference between hens and roosters is egg production. Hens can lay eggs and roosters can’t. It takes about five months for most Buff Orpington hens to reach maturity and begin laying eggs. After this, each hen can be expected to deliver about 175-200 eggs annually. When they begin laying, you’ll hear the hens all crooning in rhythm together. Once the deposit is finished, you’ll often hear an excited cackling.

Because they lay eggs, hens have a much larger, round vent compared to a rooster. The rooster will have a smaller vent since they don’t lay eggs. Similarly, hens of laying age will have pubic bones that are spread farther apart than a rooster or juvenile.

We’ve provided many different clues and indicators that you can look for to differentiate Buff Orpington hens from roosters. But for you to use any of these, you’ll have to wait until the chickens reach a certain age. At the earliest, these methods will begin to work at four weeks of age. So, what should you do if you need to tell the sex of your chicks right after hatching?

Vent sexing is a way of telling the sex of your chickens with 98% accuracy. However, it requires a professional to do it right since a chick’s genitals are easily injured at this early age. But if you must know the sex of your chicks, any chicken pro or good vet should be able to safely vent sex your chicks for you.

In this article, we’ve laid out the differences between male and female Buff Orpingtons, but why should you choose these chickens in the first place? There are many reasons why these birds are some of the most popular among backyard poultry keepers, and we’re going to briefly touch on them.

These birds are very resilient to weather. Many breeds are hardy against cold or heat, but few breeds can handle both. The Buff Orpington can. Hot summers and harsh winters are both acceptable for a Buff Orpington.

If you’re looking for friendly, docile birds that are easy to raise, Buff Orpingtons are a great choice. They’re known for their calm demeanor and friendly attitudes. Even roosters are rarely aggressive or territorial.

As great dual-purpose chickens, a Buff Orpington hen can lay over 200 eggs per year, and they also provide tasty meat with hefty yields from each bird.

Which is Right for You?

Buff Orpingtons make great chickens for any poultry keeper, but should you choose roosters or hens? For the most part, hens are your better bet. They’re the only ones that lay eggs, so if you’re hoping to eat fresh eggs laid by your chickens, hens are your only choice. Even for meat production, hens are a better choice, making for more tender meat and requiring less feed overall. Roosters are only necessary when you plan to breed your hens and increase your flock. Other than this special need, hens are generally the preferred option.