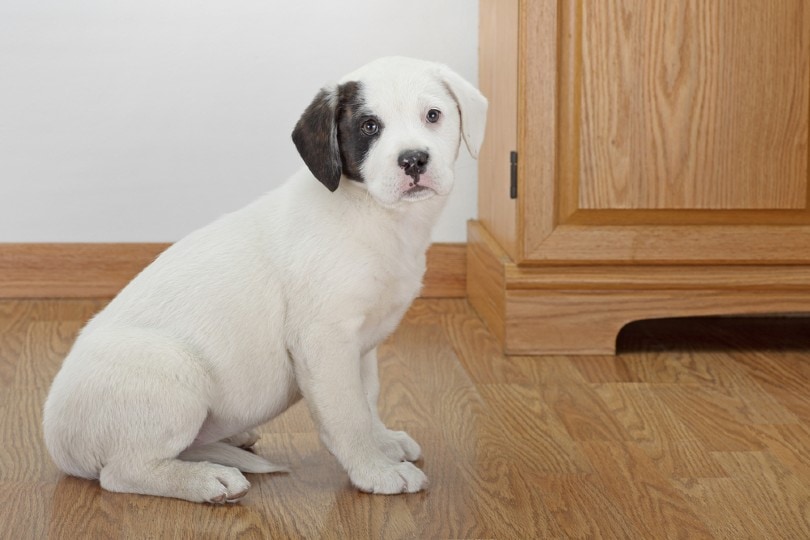 Where does the Bullador come from?

The Bullador as one of the many designer breeds that have come about in the last decade or so where people thought of deliberately breeding together two pure breeds that had not done so before. The names of such hybrids are usually an amalgamation of each parents name as you can see with Bullador, ‘bull’ for the English bulldog and ‘ador’ from the Labrador. The idea or hope is to get the best qualities of both in a more unique dog. There are very mixed opinions on this practice in the dog world though and it is vital to avoid puppy mills when looking to purchase one. There are no real guarantees when breeding any two dogs so the results in appearance and temperament are often mixed even within the same litter. To get a better feel for what might go into the Bullador here is a look at the parents.

The Bulldog is originally descended from mastiff dogs developed in England and quite an old breed. In the 1500s you can find mention of them and at this time until it was outlawed they were bred and used for bull baiting. This was a popular spectator sport during this time and people believed it was a way to tenderize the meat. In the 1800s when that sport was stopped instead of dying out as many thought they would the Bulldog was essentially rescued by some breeders who admired their finer qualities and wanted to breed them into being a more suitable companion.

They were successful and today the Bulldog still has a strength, stamina and persistence from those bull fighting days but are also now gentle and affectionate. They are social and lively and sometimes stubborn. They get on with everyone but can be harder to train as they are slow learners.

Originally bred in Canada to work with fishermen these dogs were good at helping with nets and fish retrieval as well as being good companions in the home. They can be found back in the 1700s but it was not until sometime in the 1800s that others noticed them and they were brought to England. It is a good thing that they were noticed as in Canada the breed disappeared due to tax laws and restrictions. In the 1920s they were brought to America. He is one of the most popular dogs around the world and tops that list in England, Canada and America. He is intelligent, eager to please and friendly and loving. He is a fantastic family dog, great with children and other pets and he is a great work dog too being used in various capacities very successfully.

The Bullador comes from two sweet natured and lively parents so it is natural to have those qualities in her too. She loves to play and is a very kind dog, funny and quite clever. She will be a devoted member of the family and will be quite protective of those she is loyal to and her home. She is loving and affectionate too and will be eager to please. From her Bulldog side she may be shy or scared unless she is properly socialized.

She may have more Lab in her looks or more Bulldog or have an even mix of the two. She is a medium to large sized dog weighing 50 – 90 pounds and her average height is between 22 to 25 inches. Her coat is water repellent, short, straight and dense and colors that are common include black, brown, red, yellow, tan. Her body is muscular and heavily built, some have shorter faces and some have longer faces with flappy ears.

How much exercise does she require?

The Bullador is a high energy dog and needs a lot of exercise to keep her happy. You need to be an active person yourself or be prepared to change your lifestyle to suit her needs. She would do best with a large yard she can play in, she loves to hunt things out. She also enjoys activities like swimming, long walks, and playing games like fetch, tug of war and so on. Also do not forget she needs mental stimulation in her play too. If you do not keep her stimulated she may turn destructive out of boredom and frustration. Expect to give her an hour a day at least.

Will she be easy to train?

Labs are very intelligent and easy to train. Bulldogs are not very intelligent and are harder to train. You could really end up anywhere with this one, from a dog that is stubborn and not as clever as you would have hoped, to something more like a Lab, bright and eager to please. However it lands for you remember to be patient, firm and keep it positive with praise and rewards. Establish a firm dominance and be consistent. Some owners say they have found their Bullador easy to train and some say they still struggle with things like jumping on people.

Living with a Bullador

How much grooming does she need?

The Bullador has moderate grooming needs overall. She does shed though that could be anything from a low amount to more moderate amounts. Therefore she will need regular brushing, daily when she is shedding. Regular brushing even when not a big shedder is still important to keep her coat healthy. Bathe when she needs it, some dogs manage to go a few weeks without the need, some find every muddy puddle they can!

Apart from her coat needs other grooming requirements include clipping her nails (not too low) some choose to leave that to the groomer due to potential pain you could cause. Then there is wiping and checking her ears once a week, checking her eyes and brushing her teeth regularly.

Is she good with children and other pets?

She is great with children because of her sweet nature and is usually good with other pets too though sometimes she may feel the inclination to chase smaller pets. Socialization, training and growing up with them helps a lot. With her size smaller children could get knocked down when she is playing just by accident so they should be supervised. The children also need to be taught how to behave with dogs. She may be a little aggressive to other dogs because she is protecting her territory.

Other information about living with a Bullador

The Bullador is not the best dog for apartment living because of her size and her level of activity and energy. She is also not good in extreme temperatures, either hot or cold. She is usually okay to be left alone for short periods. She makes a very good watchdog as she will bark to alert you if there is an intruder in the house but other than that she is an occasional barker. She does have protective instincts so may be perceived to be displaying aggression when in fact in her eyes she is protecting the ones she loves. She will need to bed fed 3 to 4 cups of high quality dry dog food a day, divided into two meals. Avoid letting her graze or overfeeding her as she is prone to obesity.

The Bullador has the potential to inherit health issues from either parent and the main ones that could come up are bloat which is life threatening, and then joint dysplasia, eye problems, ear infections and obesity.

Costs involved in owning a Bullador

This is a hard to find mixed breed and is especially uncommon in the U.S. Costs vary depending on where you are, popularity at the time, how reputable the breeder is and age of the puppy. Something between $500 to $750 is where they are right now. Other things to pay for before or at the time of getting a puppy are food bowls, collar and leash, crate, spaying, blood tests, micro chip, deworming. These costs will come to $500 – $600. Annual costs of owning a dog will include medical costs such as health insurance, vaccinations, flea treatment and vet check ups, along with non medical costs such as food, training, toys and treats and licensing. That will be around $1000 – $1200.

Looking for a Bullador Puppy Name? Let select one from our list!

The Bullador is a great family dog best suited to a house with a yard and an active owner. She should be properly socialized and trained to get the best out of her. She is extremely loyal and loving and protective but will also add a lot of energy and laughter to your home.