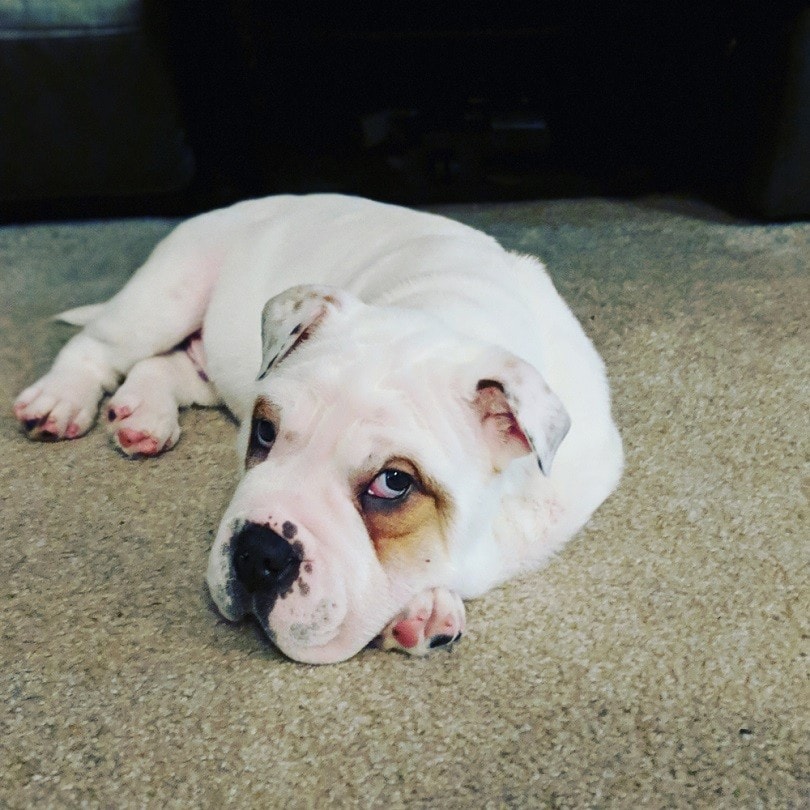 The Bullpei is a mixed dog who’s parents are the English Bulldog and the Chinese Shar-Pei. She is a medium to large dog with a life span of 8 to 12 years. Her name is sometimes spelled Bull-Pei. She participates in obedience and guarding and is a protective and loving dog.

Where does the Bullpei come from?

The Bullpei is just one of a lot of so called Designer dogs, these are dogs bred using usually two purebreds. Some are given names that blend the parent names together. Designer dogs are a very popular trend right now, celebrities and the public seem to love them but they are causing a divide in opinion. There are a lot of people that do not like them, mostly because they have attracted a lot of puppy mills and bad breeders. If we all work harder to avoid buying from these breeders though they would go out of business.

Whichever designer dog you go for you need to keep in mind that despite what some breeders might suggest, there are no guarantees with these first generation dogs. There could be any combination of looks and personalities coming from the parent dogs, even the same litter can vary by a lot. The best way we can get a feel for the Bullpei without any origins known is to look at the parents.

The Chinese Shar-Pei comes from Southern China where he was bred to fight, guard, hunt and herd. It is not known how old he really is. When the People’s Republic of China was formed the whole dog population in the country nearly disappeared including the Shar-Pei. However thanks to some being bred in Taiwan and Hong Kong and to Matgo Law for bringing some to America in 1973 this breed survived.

Today the Shar-Pei is an independent and strong willed dog but also very devoted and protective. He is aloof with strangers but loves the company of people he does know. He prefers spending all his time with his owner, is calm and can be intuitive. Sadly he was once used in dog fighting and he can sometimes still have an aggression towards other dogs so good socialization and training are important.

The Bulldog is originally descended from mastiff dogs developed in England and are quite an old breed. In the 1500s you can find mention of them being bred for bull baiting. This was a popular spectator sport during this time and people believed it was a way to tenderize the meat. In the 1800s when it was outlawed may thought the breed would disappear. Instead of dying out the Bulldog was essentially rescued by some breeders who admired their better side and wanted to breed them into being a good companion.

They were successful and today the Bulldog still has a strength, stamina and persistence but are also now gentle and affectionate. They are social and lively and sometimes stubborn. They get on with everyone but can be harder to train as they are slow learners.

The Bullpei is an affectionate, loving and protective dog. She is energetic and playful, curious and sometimes quite stubborn! She also has a gentle side though she is territorial, alert and is not welcoming of strangers until they get used to them. She is smart and loyal and can be a good family dog, getting along with everyone especially with early socialization. She loves being with her people and is quiet and confident.

She is a medium to large dog weighing 35 to 60 pounds with a sturdy and muscular body. She has a thick neck, solid build and flappy ears. She can have smooth skin or wrinkles and her coat is rough and fine and straight. Common colors are blue, brown, black, white, golden and chocolate.

How active does the Bullpei need to be?

She is a slightly active dog, she does not need a lot of exercise to keep her happy and healthy. This makes her well suited to apartment living and for owners who are not able to be very active. She does love her outside time though, a couple of medium to long walks plus play time should be sufficient. She does gain weight quickly so even if she is happy lazing around she needs her activity. She would enjoy trips to the dog park too. While a yard is not a requirement she would enjoy sniffing around in one and playing.

The Bullpei is fairly easy to train though she does have a stubborn side and that can come out more strongly in some dogs. She is smart and house trains very quickly though. Use early socialization and training to bring out the best in her. Be firm, consistent and patient with your training methods. Reward based training with lots of praise and positivity is far more effective than punishment and scolding.

These dogs need a moderate amount of grooming to keep them healthy and looking good. She sheds a moderate amount most of the year but that goes up to frequent twice a year during shedding time. A lot of vacuuming will be needed, hair will get on your clothing and furniture. Brush daily when it is bad, and then two to three times a week when it eases up again. Some owners choose to bathe more regularly during shedding time too. Otherwise just give her a bath when she needs it but be sure to use just a dog shampoo and when done make sure she is dried properly especially in the wrinkles. You can also use a damp cloth to clean those out in between bath times to avoid infection. Check and wipe her ears with a dog ear cleaning solution and cotton ball once a week. Clip her nails when they get too long or have someone who knows how, do it for you. Also brush her teeth at least two to three times a week.

With early socialization and training she can be very good with children, she will play with them and be affectionate and loving with them. She is protective too and would act to keep the kids safe. She can also be good with other animals but with other dogs that socialization is very important as she is not automatically good with them.

She can bark frequently and she snores sometimes too so this is not a dog you will forget you have around. She should be fed 2½ to 3 cups of high quality dry dog food each day, split into at least two meals. She is not good in cold or too warm weather, she needs it very temperate or you will need to make sure she does not over heat in the summer or get too cold in the winter.

There are health issues from the parents she could inherit like Hypothyroidism, cancer, skin problems, patellar luxation, bloat, OCD, eye problems, Swollen hock syndrome, joint dysplasia and reverse sneezing. Before you buy your puppy you should always ask the breeder to see health clearances for the parent dogs and you should visit the puppy to see the conditions she is kept in.

Costs involved in owning a Bullpei

This puppy could cost between $500 to $1200. Other costs come to $450 to $500 for things like blood tests, shots, deworming, collar and leash, crate, micro chipping and spaying. Yearly costs for basic medical needs like check ups, pet insurance, shots and flea prevention come to between $485 to $600. Yearly costs for other basics like food, treats, toys, license and training come to between $510 to $610.

Looking for a Bullpei Puppy Name? Let select one from our list!

The Bullpei is a great dog especially if you want a dog that will also be protective and alert but great with the children. She should be trained and socialized early on still, it will help with her willfulness as well as getting on with other dogs. She is very loyal to her owner too.