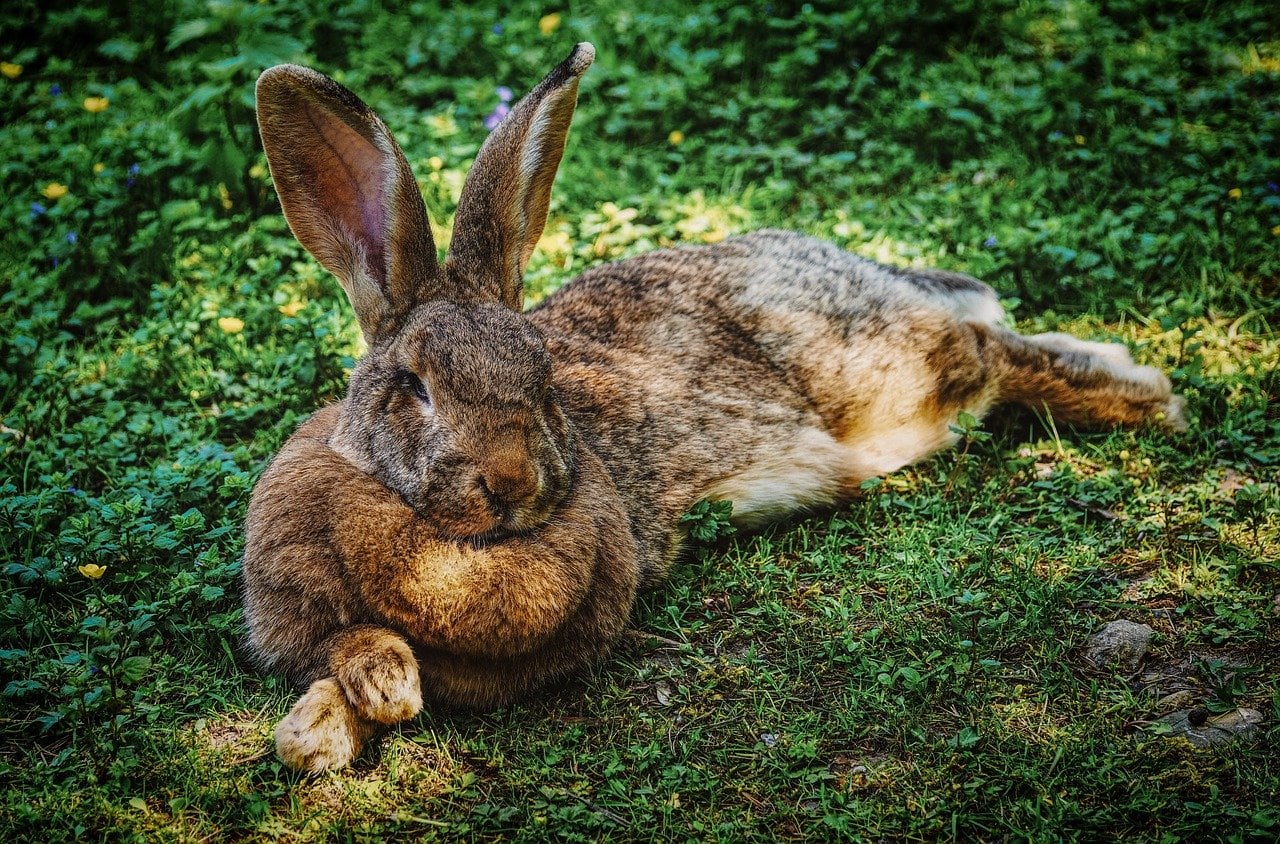 Perhaps more accurately called tri-colored then, today we’ll be looking at rabbit breeds that prominently display three colors in their coats. At the end, you’ll also see one with a coat so unique that it has its own category within the American Rabbit Breeders Association.

Because nearly every domestic breed of rabbit can show some degree of tri-coloration, we’ve limited our list just to those breeds with bold, striking differences in their colors. In almost every case, this tri-colored configuration is so characteristic of the breed that it is officially recognized by the ARBA.

Ready to get started picking out your favorite colorful rabbits? Then read on to find out more!

Everybody’s favorite giant-eared rabbit, the English Lop has a one of a kind appearance that’s impossible to forget. They are the forebear to all other lop-eared rabbits, though its exact origins remain unknown. They are especially docile for their size (around 10 pounds fully grown), and must be given special care so as to prevent injuries to their often inconveniently placed ears.

As the heir to a crossbreeding between the above-mentioned English Lop and a lesser-known breed called the Papillon, the French Lop was originally bred for commercial purposes. While its stocky body and lush coat make it ideal for meat and fur production, its gentle and affectionate temperament and variety of colors earned it fame as a house pet, as well.

Though not officially recognized as a tricolored rabbit by the ARBA, the Harlequin in some of its coat colors is perhaps most strikingly similar to a calico cat. In particular, the Blue Japanese shows a wide variation and unique patterning in its coat colors. Fun fact: In early 1900s USA, the Harlequin’s unique and fascinating coloration once made it the most expensive rabbit in the country.

Even weighing in under 7 pounds, the Mini Lop is in fact the middleweight of the lop family; the diminutive Holland Lop, a cross with the Netherland Dwarf, is the smallest available. Calmer and more docile than the high-spirited Holland Lop, they are a favorite of pet owners looking for an easy to care for lop breed. For options in their tricolored coats, see the English or French Lop sections.

Thick, short, plush fur is emblematic of the Rex family. Though a Mini Rex’s fur is certainly its most desirable quality, combining it with a sweet disposition, easy maintenance, and a variety of coat colors puts these pint-sized Rexes in a category all their own. They rarely weigh over 5 pounds and do well as pets even in small apartments.

The petite powerhouse that is the Netherland Dwarf has a reputation for housing larger than life personalities inside their tiny (less than 3 pound) bodies. Compact and spunky, they are known to settle disagreements with nibbles and chasing! With an endearing appearance and vast array of colors, it remains an incredibly popular breed year after year.

While not an officially recognized tricolor breed, Dwarves in Tan pattern varieties clearly exhibit three distinct colors in their coats.

Progenitor to the Mini Rex, this standard-sized breed once sold for nearly $1,500 a pair in 1924 U.S. markets. Renowned for its dense, even fur and solid, muscular structure, it has been a tremendously popular show rabbit since its first import to the United States. At nearly double the weight of their Mini progeny, they are a hardy and adaptable breed.

A distinct color pattern is the hallmark of this standard-sized breed. Two-color markings adorn a mostly white body, with dark areas along its spine, nose, ears, and around the eyes. Their full arch body type gives them a striking similarity to wild hares, while their active and graceful temperament makes them interesting pets.

The Rhinelander is another almost-match for the calico cat: black and golden orange on a white background is the most common coloration, though there is also a blue and fawn on white variation.

The American, Standard, and Giant Chinchillas fit into an interesting classification by ARBA standards: Their coats are so unique that they’ve been given a separate category for their color. Seen from any angle, their earthen tones give shades of white, grey, blue, black, and brown all at the same time – making it the most colors seen on any individual breed.

Each of these rabbit breeds can be a fascinating example of the influence of genetics and interbreeding on our pets. If not for the work of curious breeders and natural selection, who knows what colors we might not have available today? If you’re curious to see other colors shared by multiple rabbit breeds, please do check out our articles on grey, black, and black and white rabbits as well!