Can Bearded Dragons Eat Chicken? What You Need to Know 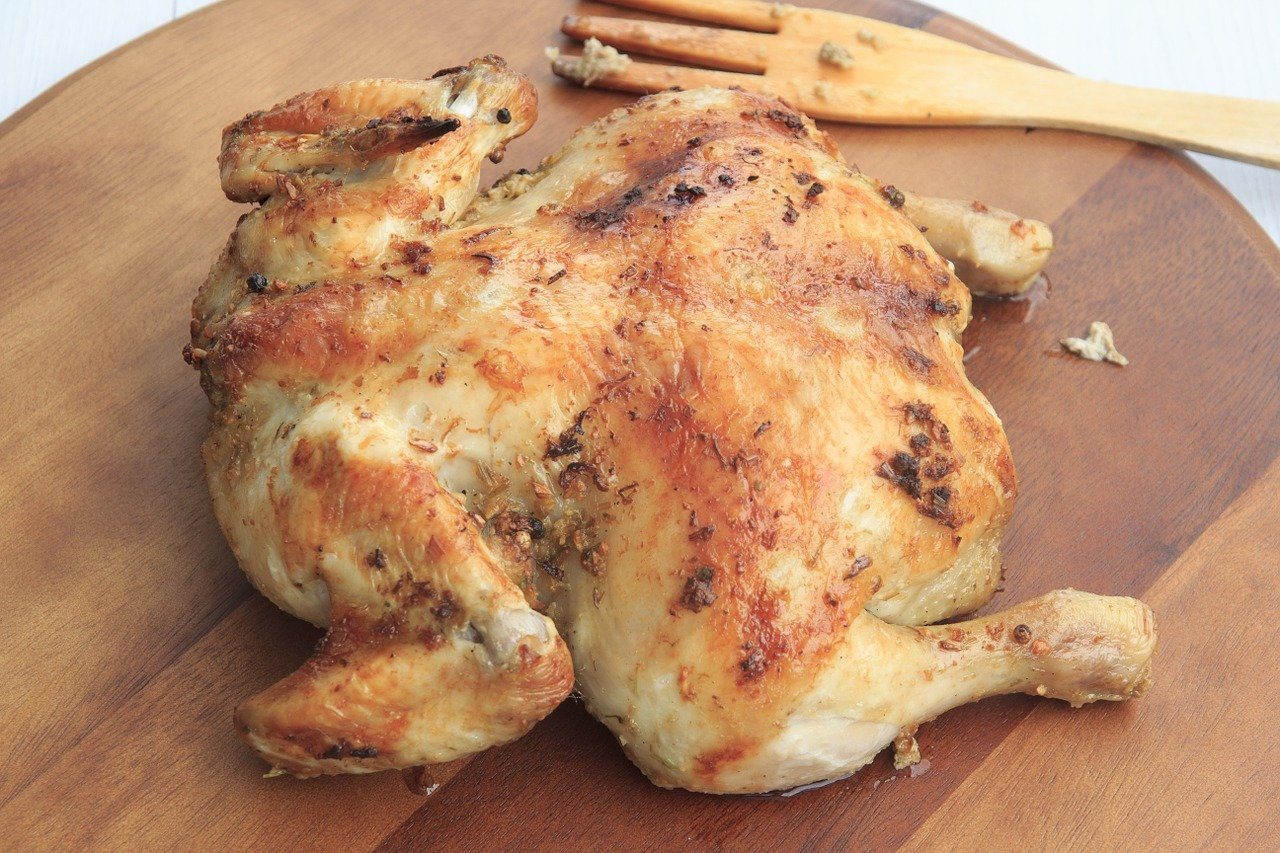 While you’re eating your delicious roast chicken dinner, maybe you’re wondering if you can sneak a little to your bearded dragon? After all, chicken is nutritious, and your beardie does eat meat, so perhaps it could be a special treat?

Is chicken safe for your bearded dragon to eat? The short answer is no. Chicken isn’t a very safe food for your beardie, and while you can give a tiny amount as a rare treat, there are a number of warnings you need to be mindful of.

The chicken is a domesticated fowl that is typically cultivated on farms for both its meat and eggs. They are found on farms all over the world and are considered to be the most common bird worldwide.

Chicken is believed to be the most popular white meat available and is used in a large variety of meals and with a very wide variety of approaches. Chicken is chock full of necessary nutrients, including selenium, protein, phosphorus, niacin, and vitamins B12 and B6.

Some of the many health benefits of chicken are:

Well, it’s evident that chicken has multiple benefits for humans, but does it have any of the same advantages for bearded dragons?

Chicken and Your Beardie

The bearded dragon is an omnivore, which essentially means he eats both meat and plant-based foods. The meat that bearded dragons eat is usually from insects such as grasshoppers, crickets, and cockroaches, as well as mealworms, spiders, and earthworms.

Do the health benefits of chicken for humans also apply to our bearded dragons? Nope! There aren’t any known benefits for beardies if they consume chicken.

If you’re wondering why chicken isn’t good for bearded dragons, read on.

The Downside for Bearded Dragons

While bearded dragons can safely eat animal-based foods (specifically insects) quite safely, chicken is another story. The most popular beardies are commonly found in the deserts of Australia, and food can be rather scarce. In the wild, the bearded dragon won’t come across any chickens running around, so they aren’t a natural part of their diet. Here are the reasons why chicken and beardies don’t mix.

This is the main culprit. Bearded dragons require certain levels of calcium for bone health and to keep them healthy overall. While chicken does contain calcium, it is also very high in phosphorus, which can actually block the calcium from being absorbed properly by the beardie.

There is more phosphorus than calcium in chicken, which is fine for humans and cats but is very unsafe for bearded dragons. The best calcium to phosphorus ratio for your beardie is 2:1, but chicken comes in at roughly 1:16, which is clearly not a healthy ratio.

Raw chicken is just as dangerous for the bearded dragon as it is for humans. The risk of food poisoning from salmonella, E. coli, or bacterial contamination is just as high. Avoid feeding your beardie raw chicken – it just isn’t worth the risk.

It turns out that not only is raw chicken not good for your beardie, but neither is cooked chicken. When you cook (or, in particular, boil chicken), it loses most of its essential nutrients. Some beardies might not even enjoy eating it since they don’t generally eat meat that has been cooked while in the wild.

Chicken contains high levels of protein, which is good for us but can be difficult for the bearded dragon to digest. If you were to feed your beardie chicken on a regular basis, he could become quite ill. The best kind of protein for your beardie usually comes in the form of insects. Essentially, chicken contains far too much protein for your bearded dragon to handle.

Chicken also contains high levels of fat, which is more than what the bearded dragon in captivity typically needs. Generally speaking, foods high in fat are unnecessary or can even be unhealthy for beardies since they don’t get as much activity and exercise as wild bearded dragons. Too much fat could lead to an overweight beardie in poor health.

Chicken is also known to have high water content, which can also make your Beardie unwell. Any foods with excess water could cause digestive issues such as diarrhea.

As already discussed, calcium is very important for the bearded dragon’s health. In particular, it promotes strong and healthy bones for your beardie. When bearded dragons do not get enough calcium, they are at risk for metabolic bone disease, which can eventually lead to serious illness and even death.

The symptoms can include:

If the disease progresses without treatment and the calcium levels become lower, it may result in:

If you detect any of these signs and symptoms in your bearded dragon, you should take your beardie to your veterinarian as soon as you can.

Calcium is quite clearly a vital nutrient for your beardie, and as chicken is something that could interfere with his calcium intake, it’s likely something you should avoid.

The bearded dragon has a tiny digestive system compared to humans and larger animals, so particular kinds of meats, including chicken, will be much more difficult for them to digest. There are beardie owners who have fed chicken to their pets without any issues, but is it really worth the consequences when there are so many other treats you can provide them that are risk-free?

If you are determined to give your bearded dragon chicken as a treat, only give him a small morsel once every 2 to 3 months. However, the recommendation is to avoid chicken altogether. Your beardie’s health and welfare are far more important than giving him a treat that really isn’t necessary since it doesn’t provide any health benefits.