Can Bearded Dragons Eat Mealworms? What You Need To Know 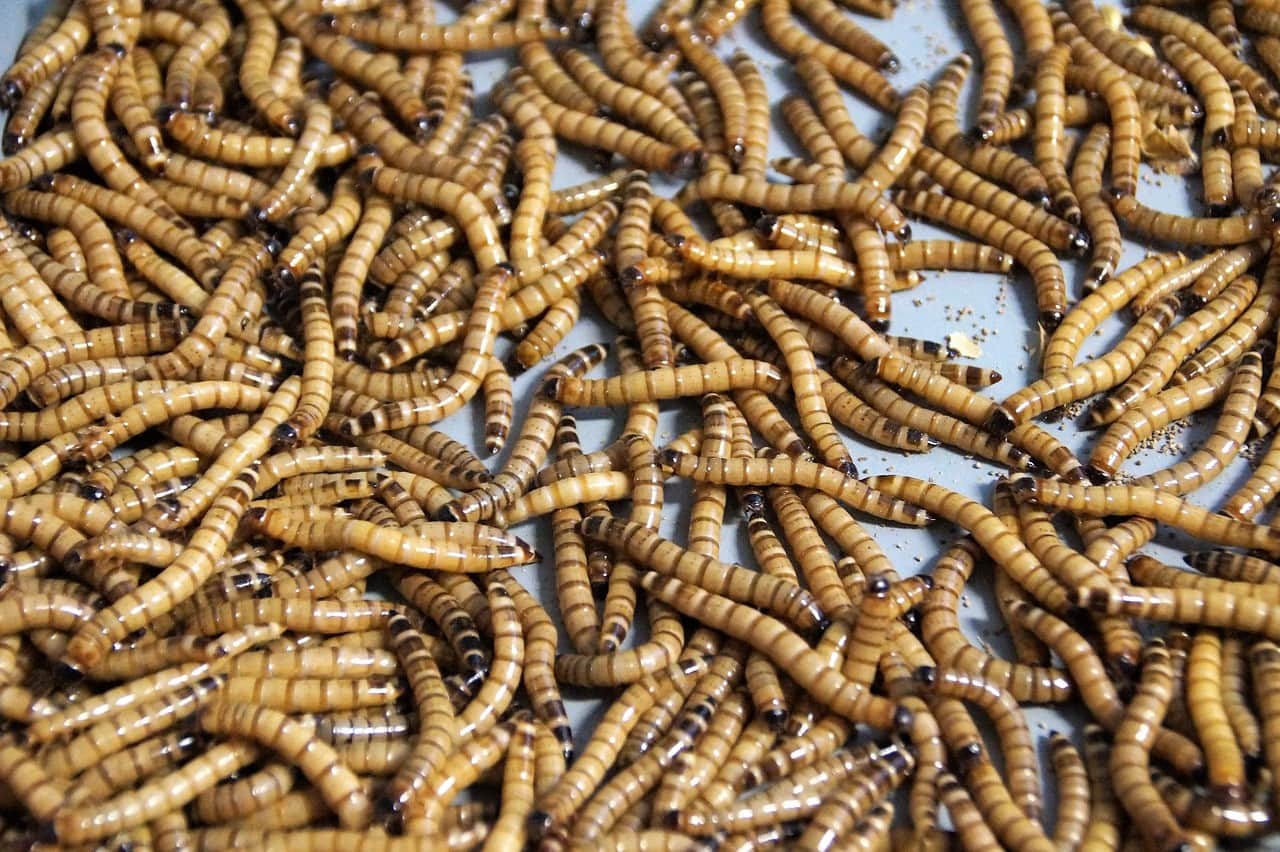 The bearded dragon is one of the most popular reptilian pets. They are considered a good introduction to the intriguing world of lizards because they are relatively easy to care for, hardy, and they are laid-back little animals that typically know their place.

They do benefit from a meat-based, live, diet, this typically means feeding them insects.

Mealworms are considered a safe addition to an adult beardie’s diet, but they should not be fed to juveniles because they cannot cope with the chitin exterior of the insect. What’s more, they are high in fat and phosphorous but low in calcium and protein.

So, while they are safe, they are not considered a healthy addition. You can dust them with supplements, to increase the vitamin and mineral content of the feeder insect, but you should feed other types of insect, such as crickets, as your beardie’s primary meat-based food source.

The Calcium To Phosphorus Ratio

When looking for nutritious food for a bearded dragon, you will see mention of the calcium to phosphorus ratio of foods like insects and vegetables. Beardies need calcium, and they also need vitamin D3 to help their bodies absorb the ingredient. If they get too much phosphorus, it prevents the formation and use of D3 which, in turn, prevents the proper absorption of calcium. Experts recommend a calcium to phosphorus ratio of 1.5:1 to 2:1. The ratio for mealworms varies but is 0.33:1 at the highest, which is far too low.

Giant mealworms and king worms have similar ratios. Therefore, you should only feed a few mealworms at a time, and as a supplement, that is fed in addition to your beardie’s main insect diet.

Despite them not having the best mineral ratio for your lizards, your beardie will develop a taste for the mealworm. This means that they can become addicted to the little worm. Once you stop feeding it, they may be looking for the mealworm and avoid any other insects or foods that you offer instead. No matter how well you dust them, the mealworm is not a solid replacement for other insects.

They Are High In Fat

They may not look it, but mealworms are high in fat for their size. This means that if you feed too many to your beardie, it can cause them to put weight on. If you feed additional treats and other high-fat foods, you should be especially careful when giving mealworms as a treat. Bearded dragons are prone to becoming overweight, and an overweight beardie is more likely to become an unhealthy beardie.

How Many Mealworms Can An Adult Bearded Dragon Eat A Day?

Mealworms are not a nutritious addition to a beardie’s diet. But they are a tasty treat. You can feed two or three mealworms to your beardie as a supplement to their daily insect diet.

Juvenile bearded dragons are those aged under 18 months, and you should not feed any mealworms to beardies of this age. Mealworms have a chitin coating that can be difficult to digest and tricky to chew. Your young beardie can become ill if given mealworms.

Similarly, baby beardies should not be fed this insect at all.

Can I Feed My Bearded Dragon Dried Mealworms?

Dried mealworms offer a number of benefits over live mealworms. They have a longer shelf life, tend to be more affordable, and are available in decent quantities. Whereas live mealworms need to be kept refrigerated to prevent them from metamorphosing into beetles.

Whether the worms were naturally dried or freeze-dried, they do not need to be kept cold in the same way. So, it is safe to feed dried mealworms to your beardie, but they have the same caveats, so they should be fed in moderation and only to fully mature beardies.

Is It OK To Feed Bearded Dragons Freeze-Dried Crickets?

Live crickets are probably the most popular feeder insect for bearded dragons. They offer a good mix of protein and calcium, are readily available in good pet shops, and most beardies find them appealing. However, they aren’t to everybody’s tastes, and freeze-dried crickets do exist, so are these freeze-dried alternatives a better option?

Unfortunately, although freeze-dried crickets can make a nice occasional treat, they should not make up a substantial or staple part of a beardie’s diet. They are naturally lower in moisture and nutrients than their live alternatives.

There are occasions where you might receive dead crickets as an intended food for your beardie. Soon after death, the cricket loses its ability to retain moisture, which means that it has the same problem as a freeze-dried cricket – it is lacking in moisture and nutrients.

Dead crickets can also pick up bacteria and parasites. And, finally, there’s the question of why the crickets died in the first place. It was probably because the tub was too hot or the crickets did not have enough food on their journey to your door, but there is no guarantee that this is the case. Thus, it’s better to avoid feeding your beardie dead crickets.

Bearded dragons usually survive and thrive on a mixture of insects, leafy green vegetables, and the occasional piece of fruit, along with supplements to incorporate additional vitamins and minerals that they need. Crickets are the most common insect, but some people do not like feeding crickets, and many owners like to offer their pets some variety.

Mealworms are not toxic for bearded dragons. They are high in fat and low in calcium. They are tough for young beardies to digest, and may cause juveniles to get ill, and so they should only be considered an occasional and supplemental treat for adult beardies that can handle them.

Similarly, dried mealworms can be fed as a treat but these do not even offer the benefit of moisture. In general, you can feed up to two or three mealworms at a time, but they should not replace more beneficial crickets or roaches as the primary feeder insect for your lizard.