Can Chinchillas Eat Hamster Food? What You Need to Know! 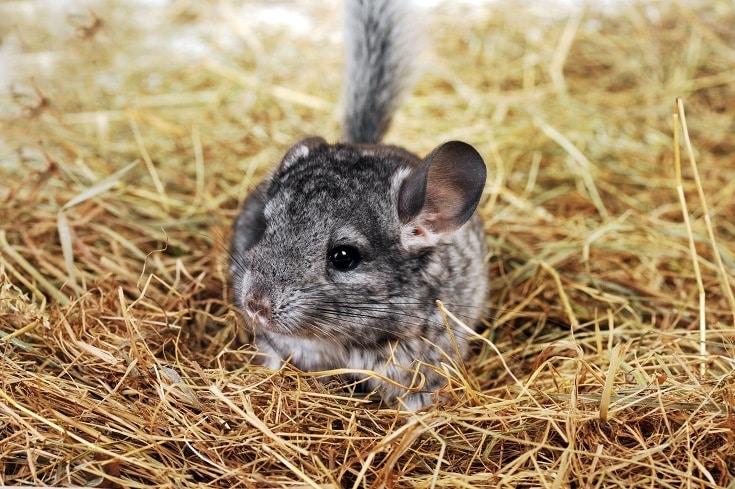 Chinchillas are adorable, and if you’ve ever bought one impulsively after seeing them in a pet store, we can’t blame you. Of course, now you have to feed it, and what do chinchillas eat, anyway? They’re basically big hamsters, so can they eat hamster food?

As it turns out, the answer is no. Feeding a chinchilla hamster food isn’t toxic, so it won’t kill them immediately, but hamster food lacks the nutrition that your chinchilla needs, so it can be deadly in the long term.

Is Hamster Food Dangerous for Chinchillas?

The answer to this question is yes and no.

If you accidentally give your chinchilla a bit of hamster food, don’t panic. It probably won’t cause serious damage, though it could lead to short-term gastrointestinal distress. If you feed hamster food to them for a long period of time, however, your chinchilla will become malnourished and could die as a result.

The problem is that while chinchillas mostly eat hay and other grasses, hamsters rely on nuts and seeds for most of their nutritional needs. Nuts and seeds are high in fats, which can be devastating for your chinchilla’s long-term health, so don’t even give them hamster food as an occasional treat.

As a general rule, hamsters need less fiber, more protein, and more carbs than chinchillas do. That’s why chinchilla pellets are so different from hamster pellets and why you should never substitute one for the other.

What Do Chinchillas Eat?

Chinchillas don’t have exciting and varied diets. Between 80% and 90% of your chinchilla’s diet should consist of timothy hay or a similar grass hay. No matter what else you feed your chinchilla, hay should be the bulk of their diet and should always be readily available.

In addition to having all the vitamins and minerals that your chinchilla needs, hay is important because it helps file down their teeth. Like those of most rodents, chinchillas’ teeth never stop growing, and if you don’t give them something to help file them down, they can suffer serious health issues as their chompers become overgrown.

There are also commercially produced chinchilla pellets that you can buy online or at most pet stores. This food is specially designed for chinchillas and has the nutrients that they need, but it should still only make up a small portion of their diet.

Beyond that, you can give your chinchilla the occasional bit of fresh produce (like greens) and small amounts of fruits. Avoid store-bought chinchilla treats, as these usually have little nutrition and can be quite fattening. Fruits and pellets can increase your chinchilla’s waistline too, which is why they should only make up a small portion of your pet’s diet.

What Can I Feed My Chinchilla in an Emergency?

If you run out of chinchilla food, you may be able to scramble up a replacement meal using ingredients in your own house, but it’s important that you know what you can and can’t feed your pet.

Resist the urge to double up on the chinchilla pellets, as they can upset your pet’s stomach and cause stomach issues. Instead, offer your cat leafy green vegetables like kale, bok choy, or arugula.

You may also be able to give your chinchilla treats like rose petals, rolled oats, or even non-frosted shredded wheat.

It’s also worth noting that your chinchilla will probably be fine if they miss a single meal. You should try to get hay for them as soon as possible, of course, but don’t worry about them dying because they had to skip supper one night.

Are There Any Foods That I Should Never Feed My Chinchilla (Besides Hamster Food)?

There are quite a few foods that should never be given to your chinchilla, and the list can be quite counter-intuitive. If you’re not sure if your chinchilla can eat something, it’s always better to look it up than take the chance.

Here are just a few foods that are surprisingly poisonous to chinchillas:

You should also be careful with fruits. Most fruits are full of moisture, and consuming that much water all at once can cause digestive issues for chinchillas. On the other hand, dried fruits are almost pure sugar, and that’s not good for chinchillas either.

Ultimately, what we’re saying is that you should try hard not to run out of hay.

While chinchillas and hamsters may seem similar, their diets couldn’t be more different, and that means you should never give your chinchilla food made for hamsters.

It’s not poisonous to them or anything, but it can wreak havoc on their digestive tract, and over time, they’ll become malnourished and can even die.

Chinchillas have surprisingly sensitive digestive tracts, and you should do your research before feeding them anything. When in doubt, though, just give them hay.