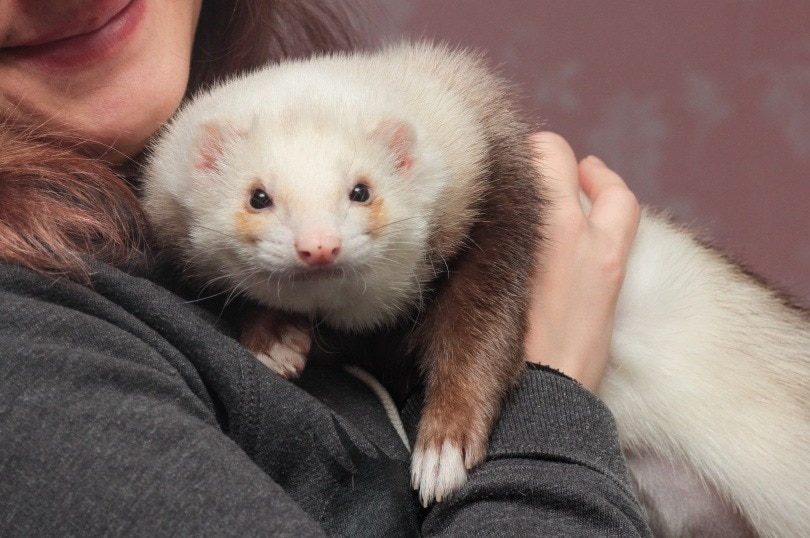 Ferrets are pretty agile, slippery creatures winding their way through any obstacle. But just because they look like they would snake perfectly on the water, does that actually mean they can swim? The answer—yes, they can (most of the time, anyway).

Ferrets are actually pretty decent swimmers—even in the wild. Unlike some other creatures, they can swim instinctually with no training required. But they don’t frequent water by choice. If you have a ferret who can’t get enough of the water, you might be able to accommodate.

If you place a ferret in a shallow basin of water, you will find quite quickly that they can swim. Wild cousins often swim out of necessity in rivers, streams, and ponds. While they can swim, ferrets should never swim long distances as their bodies are not meant for the task.

Ferrets might not seek out a nice pool of water on their own. However, some of them might be downright curious when they see water running. For example, if you turn on your sink or they see you adjusting your shower, you might see them coming around to investigate.

Ferrets have long, slender bodies that bend with ease. Because of their physical makeup, they can weasel through small openings and Houdini their way out of the toughest jams. So, their long bodies and buoyant, waterproof coats can come in handy when taking to the water.

But just because ferrets are capable of swimming doesn’t mean all of them can or will want to. Some ferrets might panic in the water, potentially leading to drowning. Also, every animal has different instincts—so it’s not always guaranteed that their natural abilities will kick in.

It would be best if you never put your ferret in deep water, as they can drown quite easily. If you want to allow your ferret to splash around, fill up a little water basin and let them play.

Never leave your ferret unsupervised next to any type of water. The risk of losing your ferret isn’t worth their few minutes of hum diddly.

Ferrets omit natural oils in their skin that don’t have the best of smells. Many owners try to combat the stench with bathing, but that can sometimes make it worse. There are tons of tips and tricks people follow to reduce the odor.

If you do bathe your ferret, you have to do it correctly. Otherwise, you will strip the natural oils and make the smell stronger. When your ferret has these excretions stripped from its fur, its gland systems work on overdrive to compensate for what is lost.

You can bathe your ferret in a kitchen sink or other small basin of water so you can have better control. Your best bet is to use a ferret-safe, fragrance-free shampoo to coat their fur lightly. Wash it thoroughly and leave no residue behind.

Just remember to go light and not overdo it. Your ferret should have a maximum of one bath per month.

Note: If your ferret is very scared of being exposed to water, protect your skin from clawing and biting. Ferrets have incredibly powerful limbs and teeth. Appropriate safety measures are necessary for both you and your pet.

So, are ferrets natural swimmers? We learned, they somewhat are. Some ferrets will show more interest than others with water—so always make your ferret comfortable.

If you bathe them, make sure to do it infrequently, even if your ferret loves water. Not only can overbathing rob their natural oils—but it can also seriously irritate their skin. So, if you have a water lover, let them splash around in a supervised setting.