Can Guinea Pigs Eat Zucchini & Squash? What You Need to Know! 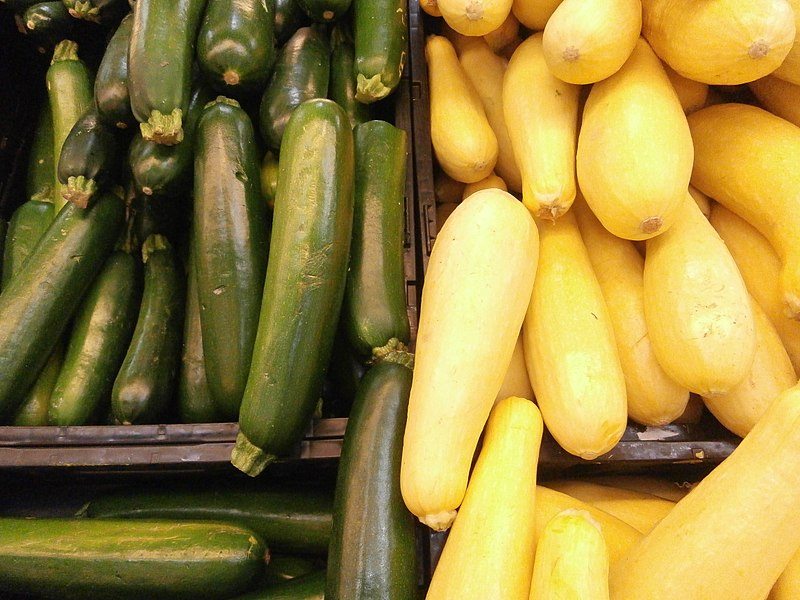 In their natural environment, guinea pigs (also known as cavies) spend much of their time grazing and foraging in groups or herds. They are natural herbivores, eating only plant-based materials. In captivity, these friendly pocket pets get by on pellets and timothy hay, but they also love to eat plenty of fresh fruits and vegetables.

Most people know that guinea pigs love fresh leafy green vegetables and herbs, but what about zucchini and squash? Are they a good food for your guinea pig? Do guinea pigs like them? Or should these foods be avoided? Well, that’s what this article is all about.

Yes, guinea pigs can eat both zucchini and squash.

Zucchini (also known as courgette) and squash are summer plants that are part of the Cucurbitaceae family, a group of plants that includes cucumbers, pumpkins, melons, and watermelons. Though botanically fruits, zucchini and squash are typically treated and prepared like vegetables.

The Zucchini is one of several fruits in a group of plants often referred to as summer squash. They are harvested when their skin is still immature, soft, and tender to eat.

When prepared for human consumption, zucchinis are typically steamed, baked, or sautéed. But, as guinea pigs have a hard time digesting cooked fruits and vegetables, when it comes to feeding your furry little pets, zucchinis should always be served raw and cut into small pieces.

Like zucchinis, other varieties of summer squash are also fine for your guinea pig to eat, and these should also be cut into small pieces and served raw.

Unlike summer squash, winter squash tends to grow on long rambling vines, and they are harvested and eaten when the fruit has fully matured and the skins have hardened into a tough rind. The name winter squash comes from the fact that these fruits are often stored and used during the winter.

In Australia and New Zealand, the term pumpkin is generally used to describe most winter squashes.

Like zucchinis and the other varieties of summer squashes, winter squashes should be served raw and cut into small pieces before given to your guinea pig. Should you wish to do so, you can remove the hard seeds before serving, but this isn’t really necessary, as your guinea pig is unlikely to eat them, and if they did, it wouldn’t matter because they are not at all toxic.

Yes, many guinea pigs like the taste of the most popular summer and winter squash varieties, including zucchini. However, you may find that your guinea pig doesn’t like the rind. This is the most bitter part of these fruits, and you may wish to cut the skin off before serving them to your pet.

What is the nutritional value of these fruits?

While guinea pigs are unlikely to overeat, it is important to ensure that they get good nutritional value from their food.

Like humans, guinea pigs are one of the few mammals that are unable to synthesis vitamin C from their other food sources. So, it is important to ensure that your guinea pig regularly eats foods that are rich in vitamin C. While their exact vitamin content varies slightly between different varieties, raw zucchinis and squash contain about 4.8mg of vitamin C per ounce (28g) and are also high in vitamin A.

Zucchini and squash are also have a high water content (26.5g per ounce (28g)), which will help keep your pet hydrated during the warmer months.

Is there anything you need to be concerned about?

Guinea pigs need a variety of foods in their diet, and it is not advisable to feed them too much of any single fruit or vegetable.

According to the Humane Society of the United States, guinea pigs need about 1 cup of fresh fruits and vegetables per day. This is not to say that guinea pigs should have a cup of zucchini or squash every day, but rather that these fruits served about once a week can be a valuable part of your guinea pig’s diet.

Of course, every guinea pig is different, and it is always advisable to introduce new foods into your pet’s diet gradually. As like humans, individual guinea pigs can have different reactions to different foods, and if you have any concerns about your pet’s reaction to zucchini, squash, you should consult their vet.