Can Hamsters Eat Cheese? Everything You Need to Know! 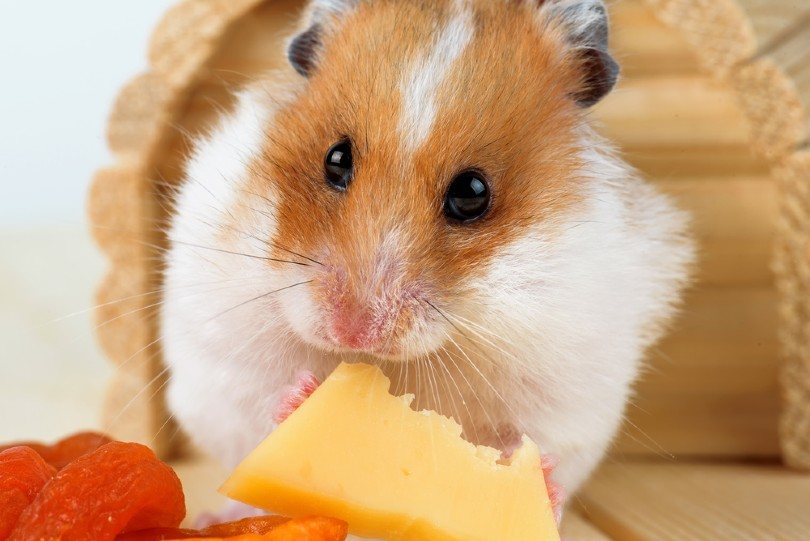 If cartoons have taught us anything, it’s that all rodents lose their minds over cheese. But what about hamsters? Is it safe for them to eat cheese?

As a matter of fact, yes, it is. There’s nothing about cheese that should be dangerous to your pet, so feel free to share your brie.

That doesn’t mean that you can just start giving them cheese constantly, though. There are a few things that you need to know before you begin offering your pet cheese regularly, and we’ll cover the most pressing issues below.

Is Cheese Safe for Hamsters to Eat?

Cheese should be perfectly safe for your hamster to eat. Regardless of the type of cheese involved, there should be nothing about it that makes it toxic for your pet.

However, that doesn’t necessarily make it healthy for your hamster. Cheese is calorie-dense and high in fat, and since hamsters are prone to both obesity and diabetes, they should eat cheese sparingly. (Also, there’s nothing that says your hamster has to eat cheese, so feel free to avoid feeding it to your rodent altogether.)

This all assumes that the cheese is in good condition as well. This hopefully goes without saying, but you should never give your hamster old or moldy cheese, as it can be as hazardous to their health as it is to yours.

Another thing to keep in mind is the salt content of the cheese. Some varieties, like asiago, cheddar, and parmesan, have extremely high sodium levels, and those should be avoided if possible. Too much salt can be dangerous for your pet, so try to limit their intake.

What Cheese Should I Give My Hamster?

There are definitely some cheeses that are preferable to others when it comes to feeding your hamster, but let us reiterate the fact that you don’t have to feed your pet any cheese at all. They’ll be perfectly happy with all the other staples of their diet — and probably healthier as well.

If you insist on sharing your cheese, though, cottage cheese (especially the low-fat variety) should be your first choice. It’s not loaded with calories like many other cheeses, and better yet, it’s full of protein and calcium, both of which are important for hamsters.

In fact, if you have a pregnant or nursing rodent on your hands, cottage cheese makes an excellent snack (but still do so in moderation).

If there’s no low-fat cottage cheese available, mozzarella is another good option. It doesn’t have as much fat as other cheeses, so it shouldn’t cause much of an issue for your hamster’s health.

How Should I Feed My Hamster Cheese?

The most important thing is to serve it in moderation. Don’t give them cheese more than once a week, and limit it to just a little bit when you do.

Pick an acceptable cheese and cut it into bite-sized pieces. Cheese doesn’t pose as big of a choking hazard as some other foods, but hamsters can be crafty when it comes to killing themselves in interesting ways. It’s best not to give them the opportunity to do so.

Don’t let any uneaten cheese sit around, as it can start to rot — and that can attract bacteria, fungi, and even insects. Rotting food is hazardous to your pet’s health (and the smell isn’t great either).

Check to make sure your hamster isn’t stashing cheese in their cheeks. Cheek-cheese can cause their teeth to rot, and dental problems are extremely bad for rodents.

Keep in mind, though, that there’s no guarantee that your hamster will even like cheese. Not all hamsters do, so if yours isn’t gobbling it down right away, you might want to remove it and serve them something healthier instead.

So, What’s the Verdict? Can Hamsters Eat Cheese?

Cheese isn’t deadly for hamsters, but it’s not particularly good for them either. It’s full of fat and calories (and sometimes salt), neither of which are good for your pet’s health.

However, many cheeses are also loaded with protein and calcium, so it’s not a complete waste. If your hamster loves the stuff, feel free to share a tiny bit with them once a week or so.

Oh, be sure to teach them that the free cheese in a mousetrap is the most dangerous cheese of all.