Can Hamsters Eat Rabbit Food? What You Need to Know! 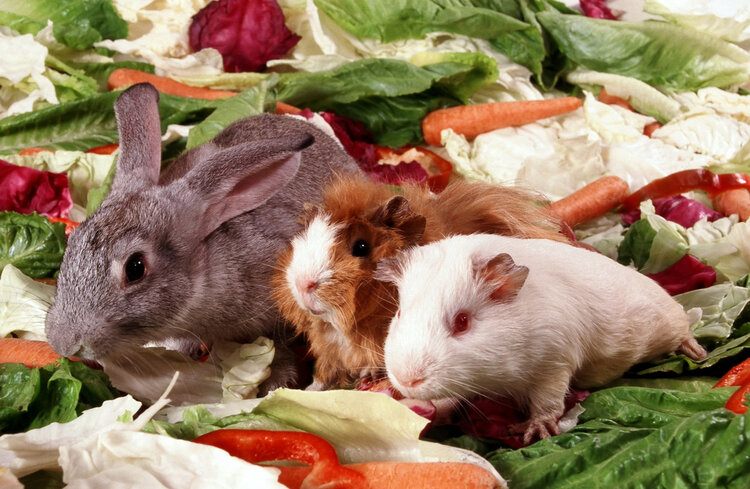 Hamsters got their names from the German word “hamstern,” which translates to “to hoard.” These little critters were aptly named, given their custom of stuffing their cheek pouches chock-full of food.

Hamsters are native to Greece, Romania, and northern China, but they were initially discovered in Syria (one of the most popular kinds of hamsters is the Syrian). In 1936, they were brought over to North America, and they live in dry and warm areas such as savannahs, sand dunes, and the edges of deserts.

The hamster is an omnivore, which means she eats a variety of plants and meat. This includes various grains, seeds, nuts, fruit, and vegetables as well as insects. The domestic hamster will usually have her dietary needs met with pellets made specifically for hamsters. They can also eat a variety of seeds combined with a small number of vegetables, fruit, and herbs.

So, we’ve established a typical hamster diet, and now we’ll have a look at a rabbit’s diet to give us a better idea of how it compares to the hamster.

Rabbits have been around a long time and were thought to have been domesticated, both as a food source and as household pets, as far back as the Middle Ages (but possibly even longer ago). Rabbits can be found worldwide, but all breeds of the domestic rabbit originated from the European rabbit. There are approximately 305 breeds of domestic rabbits found in about 70 different countries around the world.

Rabbits are herbivores, which essentially means they only eat plant-based food and absolutely no meat. The domestic rabbit’s diet consists primarily of high-quality grass hay (oat, Timothy, wheat, meadow, paddock, pasture, and ryegrass hays) or grass and makes up about 80% of their diet. Lucerne (alfalfa) and clover hays need to be avoided as they are high in protein and calcium and lead to urinary stones. The rest of their diet consists of vegetables and leafy greens (bok choy, Brussels sprouts, celery, broccoli, etc.) as well as some treats (fruit, carrots, sweet potato, etc.) and rabbit pellets.

Now that we’ve had a look at what hamsters and rabbits eat, we’ll break down what kind of rabbit food hamsters can actually eat safely.

There are a variety of foods that are safe for both rabbits and hamsters, so we’ll take a look at some of these.

Most of the types of grass hay that are safe for rabbits are also safe for hamsters. It helps to promote foraging behavior, adds fiber to your hammy’s diet, and aids in wearing down their teeth. Timothy, orchard, oat, and meadow hays are all fine for your hamster to eat. They can also eat alfalfa hay, which is one type of grass hay that rabbits actually can’t eat.

Hamsters can eat almost all of the same vegetables that rabbits are able to eat.

All of these vegetables are safe for both rabbits and hamsters, but some of them should only be eaten in moderation.

There are also a number of fruits that are safe for both rabbits and hamsters to eat.

Again, like the vegetables, fruit should be given to either the rabbit or hamster in moderation. You should also avoid any fruit or vegetables that have a high water content like watermelons or iceberg lettuce. These items can potentially cause diarrhea in your hamster.

Now we’ll have a look at what kind of rabbit foods are not safe for hamsters to eat.

Unfortunately, certain rabbit foods are not good for hamsters. We’ll have a look at what kinds of food you need to avoid and why.

Some vegetables are not safe and should be kept away from hamsters.

These vegetables (yes, rhubarb is a vegetable) aren’t good for your hamster and should be avoided. If your hamster manages to nibble on one of these, she should be fine but just keep an eye on her to be sure.

Most fruit is acceptable for both rabbits and hamsters, but there are a few to be aware of that you shouldn’t give to your hamster.

Most other fruit is okay but should be given in small amounts and only as a treat on occasion.

There are hamster and rabbit pellets, so shouldn’t they work for either species? The answer is a definite no. Pellets are made with each specific animal’s dietary needs in mind. The hamster and the rabbit are different enough from each other that they should only eat pellets made for their own species.

Different brands of rabbit pellets will have a variety of ingredients that might not be good for your hamster. Don’t forget that hamsters are omnivores in comparison to the herbivore rabbit and therefore require higher protein content in their pellets. It is recommended that hamster pellets should contain 15 to 20% protein, and they need to have the right amount of fiber to aid digestion (a lot of rabbit pellets are higher in fiber than what is appropriate for hamsters).

The final takeaway from this article should be that you need to stick to foods that are meant only for hamsters to eat. Not only do they have different dietary needs (omnivore vs. herbivore), but they are completely different species (hamsters are rodents and rabbits are lagomorphs) and are different sizes (while rabbits can be small, hamsters are clearly much smaller). If you follow our advice and consult with your vet if you’re thinking of adding new food to your hamster’s diet, your hamster should be just fine.

If your hamster eats a new food, just be sure to watch her carefully, and if you notice her looking uncomfortable or she appears to be ill, take her to your vet as soon as possible. Just as long as you avoid rabbit pellets and give your hamster the occasional vegetable or fruit, your hamster will not only enjoy a tasty new treat, but she can enjoy the many health benefits.