Can Turkeys Swim? And Other Fun Turkey Facts! 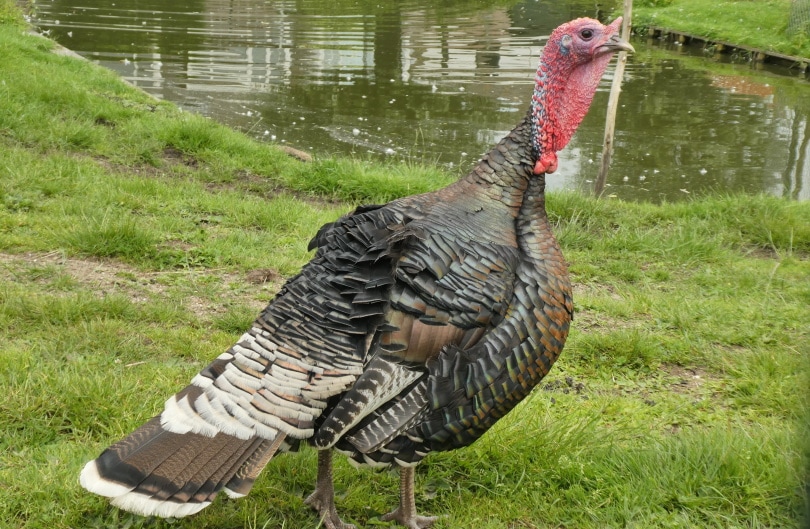 Turkeys are perhaps best-known for their addition to the Thanksgiving table, but they are also fascinating animals that live wild in every state of the US apart from Alaska, as well as being raised for their meat production. As well as being capable of running at speeds of up to 25 miles per hour, it will surprise many people to learn that they are also very capable swimmers and are more than capable of putting up a fight if they feel threatened.

The wild turkey is native to North America, where it can still be found living wild in every state bar one (Alaska). It belongs to the same family of fowl as grouse and pheasants. Turkey numbers have yoyoed for centuries. In the 1970s, there were just over 1 million wild turkeys but following conservation efforts, this number inflated to 7 million about ten years ago. Today, the loss of habitat and continued hunting means that there are believed to be only about 6 million of them left.

The domestic turkey, which is raised for its meat, was first domesticated between 200BC and 500AD. Exact figures are unknown, but it is believed that 40 million turkeys are eaten at Thanksgiving alone. A further 22 million are eaten at Christmas and another 20 million at Easter. The bird is prized for its size and abundance of meat.

They are social birds that have individual characters. They can be very affectionate if they are well socialized, but they do tend to have an aggressive side and won’t back down from a fight if they feel threatened or think that their young are under any kind of threat.

Surprisingly for a seemingly ungainly bird like the turkey, they are agile and quite athletic creatures. Wild turkeys can run at speeds of over 20 miles per hour. They can also fly short distances at considerable speed and they are not only capable of swimming but may enjoy spending time in the water.

They streamline themselves by tucking their wings into their body, spread their tail feathers out wide, and then kick to propel their bodies through the water.

Wild turkeys tend to live near water sources, although this is because they, like all living creatures, need to consume water to survive. If they fall in or are giving chase to insects and other prey, they will happily do so on rivers, creeks, and other bodies of water.

3 Other Facts About Turkeys

Although domestic turkeys are usually fed a commercial food pellet, wild turkeys are omnivorous, which means that eat a combination of plant and meat. They eat insects, frogs, and even some lizards, as well as seeds and other plants and foliage.

Having been domesticated more than 2,000 years ago, there aren’t many similarities between the modern domestic turkey and wild turkey. The wild turkey is largely silent because making too much noise would attract predators. They are also smaller than their domestic counterparts and they are capable of flying, although only very short distances: their flight has been likened to that of a long jump, albeit at speed. Domestic turkeys are incapable of flight. It has likely been bred out of them to avoid the bird getting away, and because the domestic bird has been bred to have a larger breast considered fit for the table. Similarly, another big difference between wild and domestic turkeys is the flavor of their meat. Wild turkeys have a much stronger tasting meat, while domestic birds have a milder flavor that is better suited to a majority of tastes.

3. They Will Fight You

Turkeys are large birds and can look intimidating. While they tend to be quite docile birds, pecking around in the background, they are strong and can become aggressive if provoked. If they feel their chicks or themselves are under threat, they will attack, and male turkeys tend to be more aggressive during mating season. Most experts agree that you should avoid eye contact when meeting turkeys and, if you do end up in a confrontational situation with one, you should make a lot of noise. Bang pans, clap your hands and shout, to ward them off.

The modern, domestic turkey, is a far cry from the wild bird that is still found across the US. It is noisy, less aggressive, and unable to fly even short distances. It is also larger, especially its breast, which is revered for its flavor and size. However, the domestic turkey is still a surprisingly agile animal that can run at decent speeds. Surprisingly, it is also an accomplished swimmer that adopts a similar swimming position to that of the goose, with wings tucked in, tails spread, and legs kicking for propulsion.