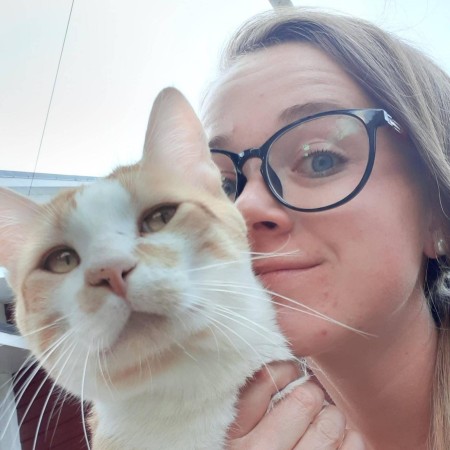 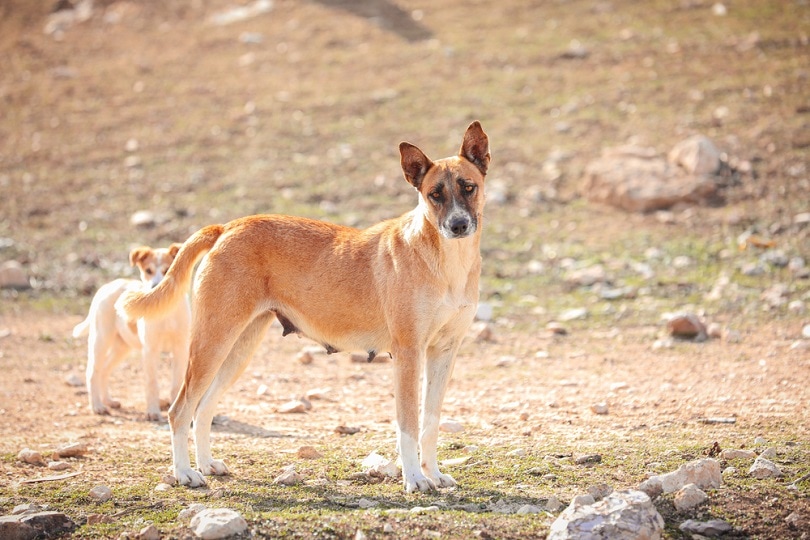 Canaan dogs are a dog breed with a rich and long history. They are herding dogs who have only been recently domesticated in the past century, but they have been around since BC times. As the name suggests, this dog comes from Israel, and Israel has made the dog a national symbol.

These dogs survived as feral dogs in the desert wilderness for 2000 years before they were domesticated for sentry use. During that time, they were bred and trained for work as herding dogs and messengers, for Red Cross work, and as landmine detectors.

People love Canaan Dogs for their smarts, moderate activity level, and their athletic build. However, some people don’t realize that lots of thought needs to go into the decision of buying a Canaan Dog before it happens. Luckily, we have provided you with everything you need to know right here in this article.

Canaan Dog Puppies – Before You Buy…

If you’re thinking about bringing home an adorable Canaan Dog puppy, it’s very important to know what you’re getting yourself into. Owning a Canaan dog can be very rewarding, but it’s not for the faint of heart. Canaan dogs need management, as this freethinking breed with a drive to be dominant will walk all over a passive owner.

However, precautions can be taken to avoid this “top dog” mentality from taking over. As puppies, Canaan dogs need to be socialized early on and continued into adulthood. This can be done through formal classes like “puppy kindergarten” (recommended) or at home.

Purebred Canaan dog puppies are anywhere between $800 and $2000. It all depends on the breeder and whether the pups come from a good working line or not. The steep price is because the breed is rare in North America. Canaan Dog breeders in America only have 15-20 litters average in one year, so there are almost always more people wanting puppies than there are puppies available.

With this in mind, note that it may take up to 12 months from the start of the process for you to have a puppy in your home. Canaan Dog breeders take great pride in this breed and will make sure that the Canaan Dog reputation stays good. Many of them run thorough evaluations of potential owners that could take a long time, so the purebred dogs go to the most suitable homes.

1. Canaan Dogs Speak Their Own Language

Howling, grumbling, moaning, and growling are all ways that Canaan Dogs communicate with the people and animals around them. To the untrained ear, this could sound like aggression, but often these dogs have different ways of “talking” other than just barking.

2. Their History of “Wildness” Affects Their Training and Temperament

Because they survived without domestication for so long in the desert, Canaan Dogs take longer than other dog breeds to be correctly socialized. However, their ability to think and act quickly makes them easy to train, so long as you assert your dominance as the dog owner.

Though their behavior can sometimes seem aggressive, Canaan Dogs will most often choose flight over fight when they are faced with a threat. They will bark and be skittish, but they rarely bite as a defense.

Temperament & Intelligence of the Canaan Dog

Canaan Dogs are known for their keen awareness of what’s going on around them and their ability to turn on a dime. These dogs respond well to good training, and arguably need the training to thrive in a domesticated setting. Otherwise, a Canaan Dog may run the show for you; they are that smart.

Some people who don’t know anything about them may watch a Canaan Dog and think it is too aggressive.  However, many people misunderstand a Canaan Dog’s communication style with signs of aggression. They have been known to step in and “break up” a nearby playful dog wrestle, play roughly with other dogs, and be quite vocal in their play. Keep in mind that their breed had been wild for thousands of years, so they do still maintain some “wild dog” characteristics.

All of this can be maintained with proper socialization as a puppy and into adulthood and proper training.

Adult Cannan dogs with no prior or proper socialization to various kinds of people, situations, and children will not likely be good for families. However, when these dogs have been exposed to lots of people in the right way as puppies, they do well with families. As herding and watchdogs, they will protect their families they are raised in well.

As long as it recognizes the other dogs or pets as “in the family,” the Canaan dog will do well with other furry friends. The key to this is socializing the new Canaan dog puppy as soon as and as frequently as possible to other animals. This way, your new puppy will recognize what animals are “okay” and what ones can be considered as threats.

The socialization of the Canaan dog puppy and other animals must be controlled and go a certain way, though. If a cat and a puppy are introduced and the puppy is constantly chasing the cat around, this will be their lifelong relationship. The owner of the adult Canaan Dog must be welcoming of the other pet for the dog to be accepting.

According to the Canaan Dog Club Association, Canaan dogs and small mammals do not get along well. The prey drive in Canaan Dogs is strong, and they have been known to track, chase, and kill small animals.

Things to Know When Owning a Canaan Dog:

Several Canaan Dog owners have fed their dogs these foods with success: California Naturals Innova, Purina Pro Plan, IAMS, and Eukanuba. Some have also fed their dogs a Bones and Raw Food diet, as well as a frozen raw foods diet.

Canaan dogs will typically eat more when they are more active. However, be aware that they can become overweight if fed too much while not maintaining an active lifestyle.

Canaan Dogs only have moderate exercise requirements. You may find that your Canaan Dog likes to sleep most of the day. But, once the morning and evening hours come around, your Canaan Dog will probably want to get out and run around.

Keep them in a fenced yard to establish their territory for them. Otherwise, as territorial dogs, they may defend what they think is their territory, even though it’s not technically theirs.

As we have previously mentioned, Canaan Dogs require a lot of training. They instinctively want to be “top dog,” so you need to assert dominance with them.

Canaan Dogs are remarkably easy to train, but they may not always be reliable in performing “tricks” every time after they have learned them. They look forward to whatever incentive is in the trick and are not necessarily eager to please like other dog breeds. They despise repetition, as it can be boring for them, but they genuinely love to practice agility and speed.

Canaan Dogs are “soft” dogs, which means that they don’t respond well to negative training methods. Respect is a big deal to these dogs, and they will thrive if training is done with mutual respect.

Due to their natural “denning” instincts, Canaan Dogs take well to house training and can be trained to go to the bathroom outside very easily.

These dogs have two coats, an undercoat, and a rough outer coat to keep them going even in harsh conditions. Their coats are short, which makes them very easy to maintain. They only need to be washed when they are dirty. A weekly brushing will keep their coats healthy-looking all year. Canaan Dogs are moderate shedders throughout the year, but twice a year they will shed a lot.

Like other dogs, Canaan Dogs should have their ears checked regularly for infection. Also, brush their teeth often, using doggy toothpaste.

Because Canaan Dog breeders keep their breed in check, there aren’t too many health problems to worry about. Canaan Dogs are a very hearty dog breed that survived the harsh conditions in the desert for many years before they were domesticated in the ’30s.

Always ask a breeder for a health guarantee on your Canaan Dog puppy when you purchase it and make sure both of the parents are evaluated for genetic health conditions.

Canaan Dogs have a small but loyal following. If you want in on this exclusive group, you can find out more on the Canaan Dog Club of America website, where they have a list of recommended and reputable breeders that sell purebred Canaan Dog puppies.

By now you hopefully understand that though this dog breed is regal, it requires much training and discipline to own one, along with a constant tough-love reminder of who’s boss. If all of this sounds easy for you, then a Canaan Dog will be an excellent fit for you.