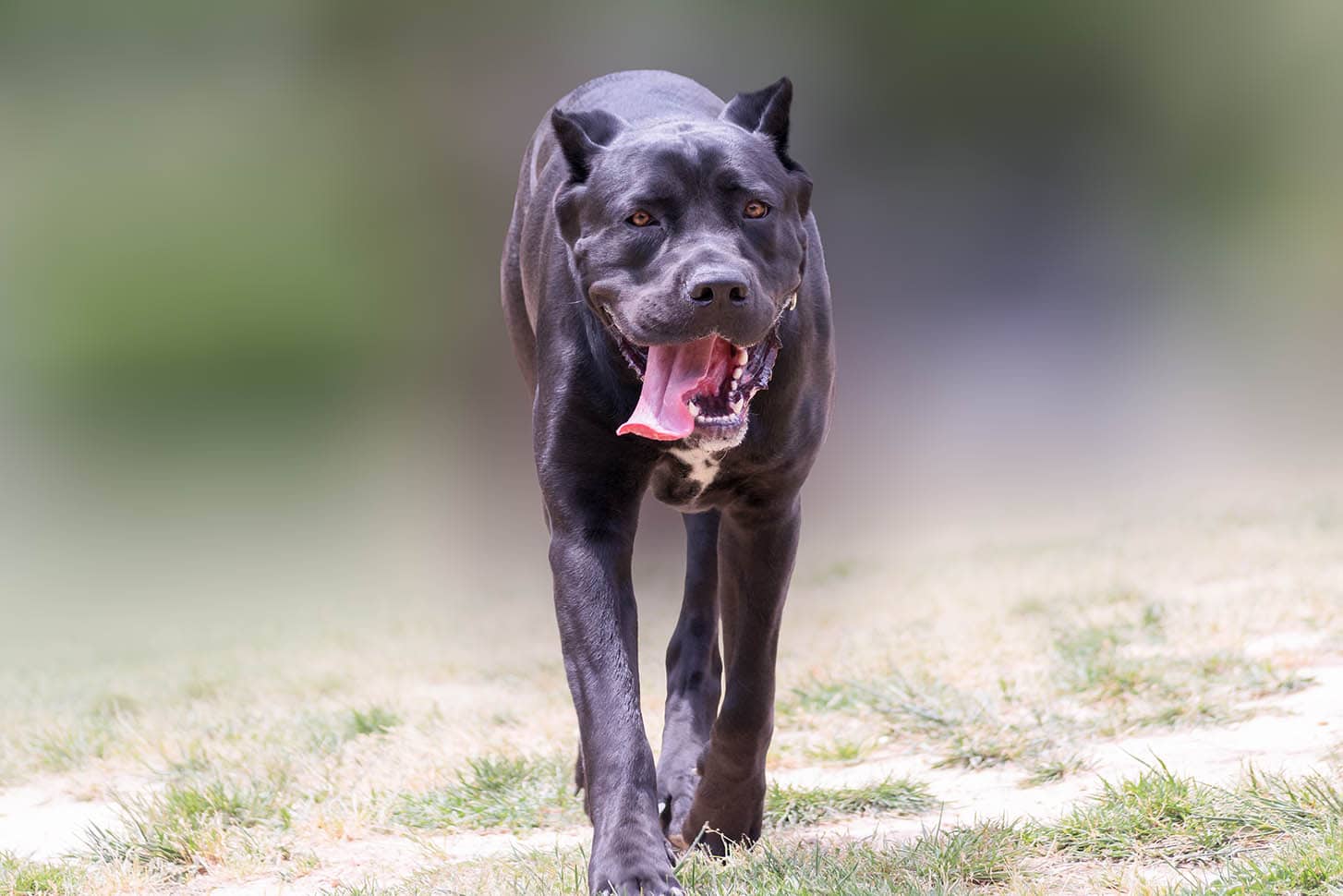 It is possible you’ve never heard of this dog before. It is a unique dog that hasn’t been around all that long. In fact, it is so rare that no major kennel club recognizes the breed. Back in the 1970s, a man named Scorpio Jones wanted to have the ultimate guard dog, and he set out to create the Canis Panther. To achieve his result, he had to mix the Great Dane, Doberman Pinscher, Black Labrador Retriever, and the American Staffordshire Bull Terrier. Four amazing breeds that turned out a regal-looking dog that was massive.

This dog is made of pure muscle and has a striking resemblance to the wild predatory cat it got its name from.

Canis Panther Puppies – Before You Buy…

If you ever lay eyes on a Canis Panther puppy, you may want to snag one up right away. They are stunning dogs even in puppyhood, but they come with their fair share of challenges. The biggest one, they aren’t a first-time dog. If this is your first dog, then you need to find a different breed because these dogs need an experienced owner.

If you look at our star rating, you’ll see these dogs have a serious amount of energy that rivals their intelligence. As a result, unless you are active yourself, you may not be able to provide these dogs with the stimulation they need. When these pups get bored, they use their brainpower for destructive purposes. Since they have such a big stature, the damage can be extensive.

If you are dead set on getting a Canis Panther, then get ready for a very pricy dog. If you can find a breeder at all, you are looking to put down anywhere from $500 to $5,000 for one puppy. They are designer dogs, and they are a rare breed at that.

There are dogs out there for lower prices, starting at the $200 range, but as tempting as that is you must consider the breeding. How are the puppies being treated? Is the mama dog being treated well, or is this a dog that is only used for breeding?

Always look into your breeder and go to the facility a few times before considering a puppy from there. You want to know that your dog will be healthy when you bring them home, and a breeder who doesn’t allow you to come and look could be bad news.

1. They are Known as “The Ultimate Protector”

Considering this is what the Scorpio Jones wanted, it is a good nickname to have. They are ranked as one of the top guard dogs to own. This breed was born to serve and defend the leader of the pack, which would be you. Their job is to make sure you are safe at all times and their home is safe. Coming from four different breeds gave them a unique mix of protection genes.

This dog can flip personalities on a dime if they feel their owner has been threatened. They can come from sweet loving dogs to aggressive ones. The Canis Panther is a breed that will have no regard for their own life as long as they can protect their human. Typically, this is one specific human in the pack, often the leader, that they would die for. This means they aren’t good with new people and can come across as very aggressive dogs, even if they aren’t.

Living with a Canis Panther is like owning a mood detector. These dogs just know when something is wrong with their owner and will want to do everything in their power to help. Considering their big size, that can be a small problem if you don’t want a dog laying on you. Yes, they can have the aggressive side, but these dogs can be the sweetest, most affectionate dog out there around their pack.

Temperament & Intelligence of the Canis Panther

As stated before, these dogs are a lot like a switch. They can be aggressive dogs towards people they do not know or even animals they don’t know. A Canis Panther will attack if they feel their owner has been threatened and they will not hold back.

Therefore, this breed needs a strong owner who will train their dog and keep up with that training. They are bright dogs that enjoy learning and following commands. It is what makes them such great guard dogs in the first place. However, when that switch gets flicked, they have one thing on their mind and that is protecting their family at all costs.

Strangers will never see how sweet and loving your dog is.

This is a yes and no answer. Yes, the Canis Panther can make a great dog to the right family. Typically, they don’t do well with small children unless they are raised with small children. Most dogs of this breed will pick a single person in the family that they hold above everyone else. As long your Canis Panther sees someone as family, they will be part of the pack and will be protected.

Since this breed is so protective and territorial children should always be supervised when with this dog. Most likely they won’t hurt your child, not on purpose, but since they are so big, they could easily do it by accident. As smart as these dogs are, they forget they aren’t small animals. They could easily knock over your toddler on accident by just playing.

Typically, the answer here is no. They should be the sole animal in the family for the most part. Now, every dog is different and if you raise your Canis Panther alongside other animals, then they can get along. Since they require so much attention and training, you should make sure you have the time to split between other animals.

However, cats and other small animals are often a no-go. They simply do not get along personality wise with the Canis Panther’s territorial side.

Things to Know When Owning a Canis Panther:

To maintain a healthy dog, you will need to have high-quality food. Always check with your vet about how much food your dog needs. Pick food that has protein as the first ingredient and no grains. This type of food can get expensive, but it is the best quality for your dog and will keep them as healthy as possible for as long as possible.

Unlike other dogs, the Canis Panther needs exercise that engages their minds and body. They need to be challenged regularly to keep their brain stimulated and focused.

That being said, they need about an hour of vigorous exercise each day. Long walks, hiking, playing in a fenced-in backyard, or just training is a great way to keep your dog busy and get them tired. A tired Canis Panther is a happy Canis Panther.

Training should be a breeze since this breed loves learning and taking orders. Early socialization with this dog starting from puppyhood is necessary. If you want to avoid aggression or anxiety, then socialize starting as soon as possible. This gets your dog used to other people, animals, and sounds that happen every day.

You will have to assert your dominance over your dog, to get them to understand you are the pack leader. That doesn’t mean yelling or hitting, but just correcting their behavior. Set up rules and boundaries and reward them for respecting them. Staying calm but assertive when correcting behavior is key to this breed.

Thankfully, the Canis Panther has relatively low grooming standards. However, if you are looking to take this dog to the groomers, start young. They must know that the groomer is a friend and not someone they have to protect you from.

Brushing about once a week is good enough for their short coat. Cleaning their eats and teeth should happen frequently. Nail trimming needs to be done to keep their nails from overgrowing and splitting. They don’t need bathing unless they are extremely dirty. Bathing too often can strip their skin from healthy oils and lead to dry skin and irritation.

Because of their short coat, they need to stay inside during the winter, since they have little to no protection from the cold.

The Canis Panther is a fairly healthy dog breed. Because of their new status, though, there hasn’t been enough information to know just how healthy they are in the long run. So far, they have shown any predisposition to genetic health issues though.

The crucial difference here is the fact that the males are slightly more aggressive than the females. This can easily be fixed through training and keeping up with that. The males are also slightly larger than females in size. Females are more sensitive to their human’s emotions and slightly more affectionate. Other than those differences, the sexes are generally the same.